A Calligraphy Workshop in Sunny Sequim 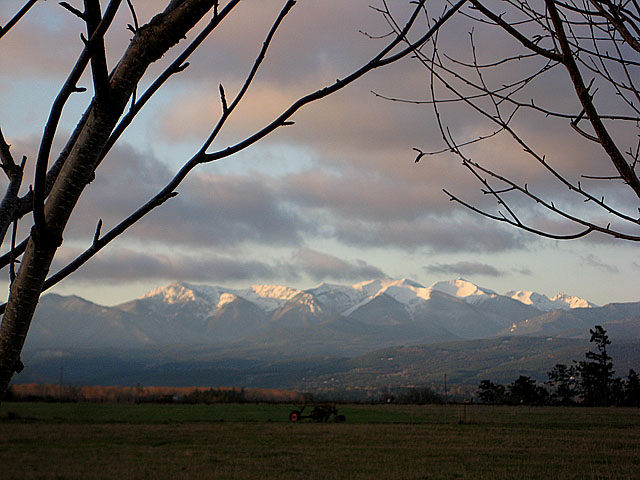 Calligraphy was the reason I visited the Pacific Northwest in late March, to teach a workshop about the intricacies of medieval writing. At the same time, I was amazed by the exhilarating views of Nature’s lines and shapes in this very beautiful part of Washington state. Sequim is nestled at the top of the Olympic Peninsula, just across the strait from Canada, in the rain shadow of the spectacular Olympic mountains. I am always seeing letters in the landscape, and in this detail of a demonstration I made for the class, I can see and feel echoes of those rolling, pointy peaks outside our windows in the arches and sharpness of the strokes. Above, the trees are a bit like the hairlines of the writing with their calligraphic branches. 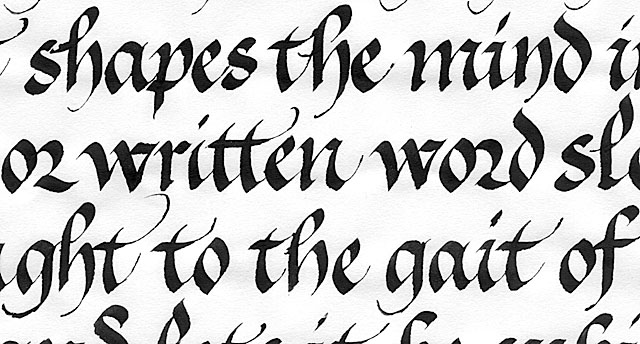 I was also feeling the landscape in the rolling, folding display structure to which my demonstration paper was attached.  It was a bit like writing on the zigzag shape of the mountain peaks outside our window, only vertically. You can see the challenge of writing on this bendy surface across the horizontal stretch of paper. Using an oversize broad-edged marker, I drew the minuscule letters, roughly grouping them by letter and stroke shapes, with variations. These letters look pretty wonky, but you get the idea. 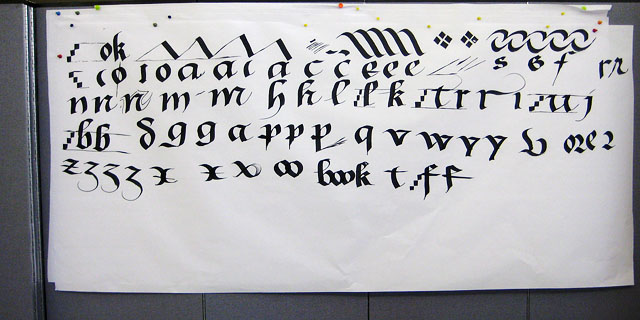 I was happy teach a willing group of sixteen scribes who had come from near and far to study the beautiful batarde hand with me. Batarde is the French word for bastard, because this style of writing was essentially the handwriting of the Middle Ages in Europe, and had many variations from more formal bookhands. Batarde evolved as a quicker way of writing  and its cursive qualities still make it a delight to write, though I could never write it as small as my predecessors, who wrote it with quills on vellum pages as small as 3 by 4 inches for the popular books of hours .

A few miles down the road from our workshop location was a bridge crossing the Dungeness River, where after the first day of class I enjoyed the late afternoon sun on the whitecaps and the stands of white tree trunks. 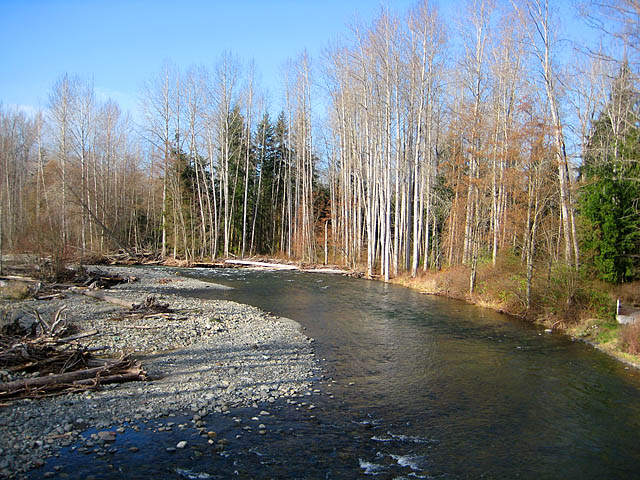 Medieval books of hours were often decorated with religious scenes, but just as commonly included landscapes and floral designs. I taught a few of the decorative techniques that are used to embellish this style of calligraphy, including hairlines, the use of color and decorated initial letters (called “versals” because they traditionally began a verse of text), and a quick look at a simple border. Below is a detail for this style from my Beginner’s Guide: Calligraphy and Illumination. 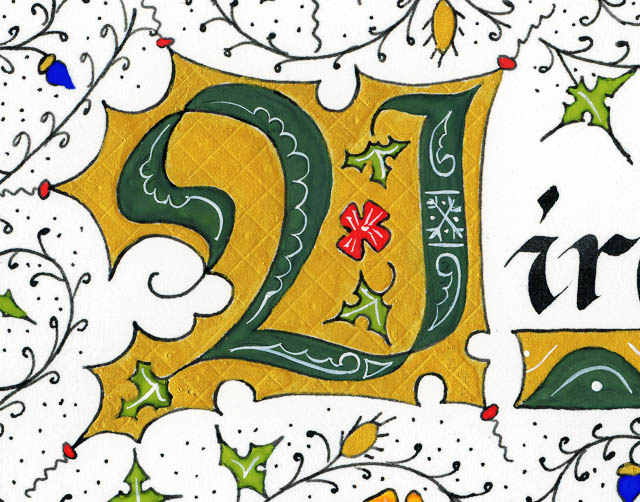 Known as sunny Sequim, this town’s rural character is still much in evidence. Deer and elk pass by frequently, and I saw bald eagles for the first time ever, a pair of them nesting. The male flew out to perch above the nest while we visited, acting as sentinel for the female in the nest below. 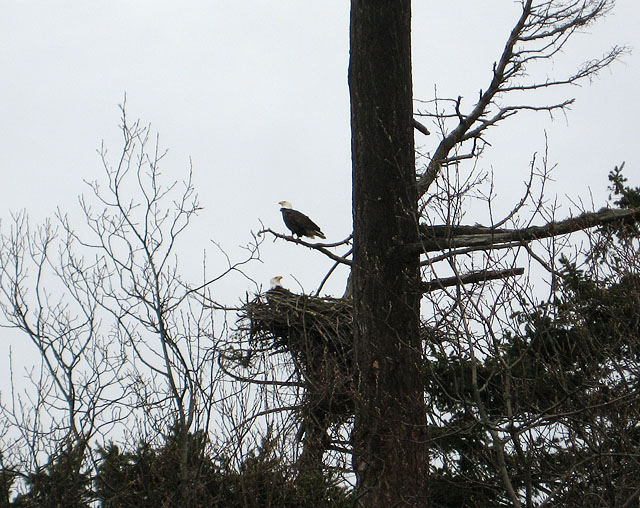 Here was more pleasant resonance between the natural world and the manuscript pages of this medieval hand, in the hawk illustrated below, coming out of the tail of the “g.” Then as now, scribes took notice of the world around them and included it in their devotional texts. 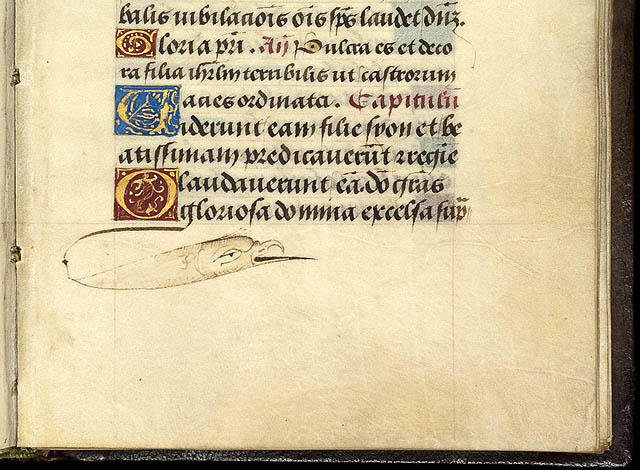 Thanks to Peninsula Scribes for inviting me to teach!

Here is a lovely little thank you note I received from one of the students in my class, Elizabeth Walsh. She used these lovely printed cards which match the batarde hand very nicely! Elizabeth is the Hospitality Queen for the upcoming annual gathering of the calligraphy tribe in Portland at Calligraphy Northwest. 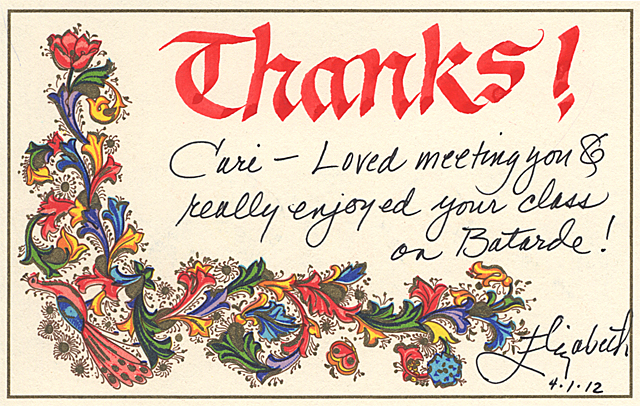 Postscript August 2012: Another student from the class, Brigitte Hefferan, sent me this amazing envelope with a thank you note inside. Not only did she use the Batarde hand for her “Dragonpost” but her own personal calligraphy is very nice. AND she hand-carved the dragon stamp! This little treasure was among the bits that got lost in the shuffle this past spring and only recently surfaced in a desk cleanup. Thank you Brigitte for a lovely note and envelope! 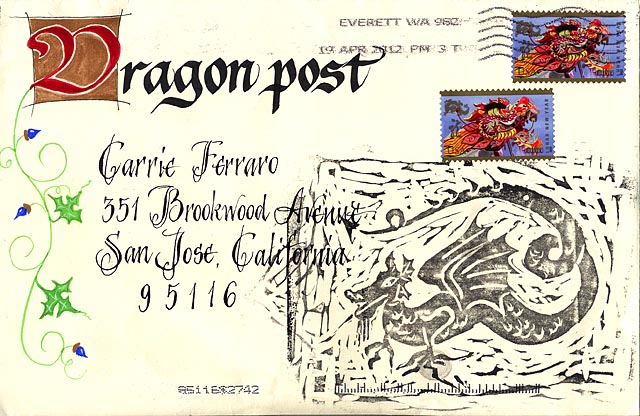