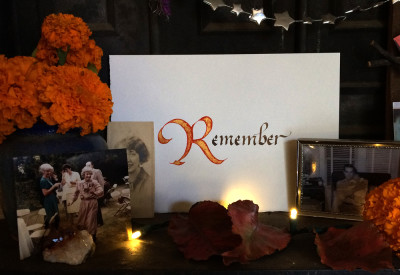 This year my altar for the dead is small but heartfelt. Having just returned from a week in Seattle, I’ve been absorbed in the prosaic chores of laundry and others sorts of reconnoitering. But the home front didn’t feel complete without a nod to the ancestors and other beloved dead who seem to draw near at this sacred time of the year, when the veil between worlds is said to be thin. So marigolds were collected and a few favorite photos placed among the dried autumn leaves. In my part of the world, where Halloween gives way to Dias de Los Muertos, this is called an ofrenda, meaning quite literally, an offering. I love this word, for it speaks to the participatory nature of this practice, not exactly a worship, but an invitation, a welcome.

That is my mother on the left, lively and dancing toward the end of her life, and always a cutup for the camera. Behind her is her birth mother, only partly seen, yet someone whose life and death have been calling to me for a long time. At right is my father holding me as an infant, the love and pride on his face so evident I tear up every time I look at it, for that love and pride became elusive as time went by. Such is the nature of memories, the bitter mixed in with the sweet and watered by tears.

“Remember” says the calligraphy in the center. This was done as a demonstration in my workshop for the Write On Calligraphers in the Seattle area, as we studied the bâtarde hand of medieval Europe. Bâtarde means quite literally “bastard” for it was the running hand of the more formal Gothic bookhands, taking as many forms as there were scribes. The big “R” is a versal majuscule, drawn with double pencils and painted with a light cadmium red gouache, then touched with a brush full of bright gold gouache to make it shine.

Bastard is a word and concept that is reviled, and caused much suffering to my mother. It simply means of “natural” rather than “wedded” parentage, and is an idea born of patriarchy. There is a story to tell about this, and that is for another time. But in a wyrd way, everything in this picture fits together.

Blessings of the darkening season to you.