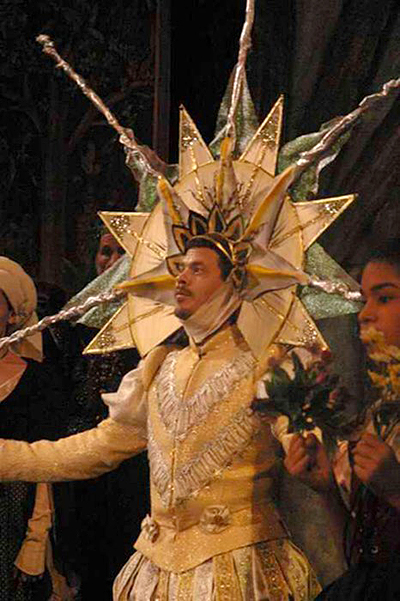 Here it is December, one of my favorite months (isn’t our birthday month always a favorite?) and not least because we will soon be attending the Christmas Revels at the Scottish Rite Theater in Oakland. In our family, it would not be winter solstice without the Revels. Winter solstice is about the return of the light. People everywhere in every culture have traditions to welcome back the sun at this darkest time of the year. I love this photo of Bobby Weinapple at the 2003 California Revels performance; photo taken by Janet McMillan and used by permission of California Revels. What a splendid sun!

For our first Revels, we had bought our tickets late so we were in the last row of the balcony. The house went dark, and then, directly behind us, a bagpiper began playing, and continued solemnly playing while walking around the entire curved back of the theater; then the lights came up and the show began. That was the Scottish Revels, with Alasdair Fraser, among other great artists, and I was bewitched. We have never missed a show since that first one in 1992.

True magic can happen in a darkened theater, and Revels knows how to enchant. Whether it be the Abbots Bromley horn dance, a 900-year-old mummer’s dance performed on a twilit stage with six antlered dancers and four other strange characters, or dancing out of the theater with audience and cast at the end of every first act to The Lord of the Dance, year after year in a joyful celebration, I am always moved. Several times during the show the house lights come up and we all sing together. If my sister is with me and we catch each other’s eye, invariably one or both of us is already crying silent tears of joy at this rare opportunity to just SING TOGETHER. How rare and beautiful this is, and how simple. Just to sing, part of a large and loving community of people who have come just to celebrate being alive and coming through the darkest time of the year, together.

Many artists have been inspired by and contributed to Revels. This year Yo-Yo Ma has released a new album of music inspired by the Christmas Revels. My own artistic work has been interwoven with Revels for many years.

I first heard a Revels performance on an audiocassette tape; it was here that I first heard a version of Fra Giovanni’s Letter to a Friend, and my Lord of the Dance card was created for Revels in 1994. Since then several of my winter solstice cards and poems have been created in direct response to Revels celebrations.

Splendid costumes, ten-foot-high puppets, Morris dancers, mummers, poetry, stories, the children’s chorus, silliness and solemn ritual, Revels could be called a pageant, but it is the participatory aspect that brings families back year after year, sometimes several generations strong. Begun 37 years ago by John Langstaff, a folklorist and educator, and with the original Revels based in Cambridge, Massachusetts, Revels has up to a dozen incarnations around the country.

So if you live anywhere near Boston, New Hampshire, New York, Washington D.C., Houston, Boulder, Seattle, Portland, Oakland, or Santa Barbara, get thee hence to a Revels performance. Join with others in the great shout, Welcome Yule!

Next post: The Longest Night; Evolution of a Greeting Card