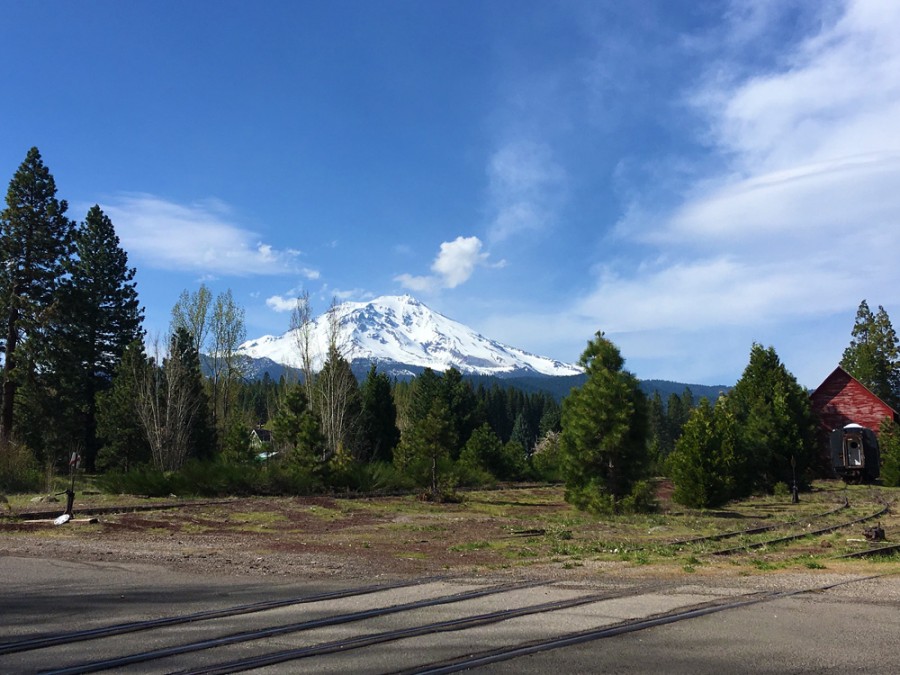 A few days after May Day, I bundled my bumped self into my car to drive north to Mount Shasta. I went to McCloud to teach a short class in drawing Celtic knotwork, as part of their first annual Celtic festival. But I welcomed the pilgrimage, to take time to go to the sacred mountain, for clarity and purpose. There is nothing more grounding than a big mountain!

I had seen this particular holy mountain for the first time many years ago. At the tender age of nineteen I was new to California and game for a road trip with a friend visiting from back east. We drove most of the west coast up to Washington and back to southern California. On our return trip, we drew near the great mountain from the north as the sun was setting, and then floated on south on Interstate 5 winding past the lake, during the magic hour. I have carried a memory of that water, that mountain, all these years: the lake appearing and disappearing, violet and ethereal. Water. Mountain. Water Mountain.

This time I approached from the south. As I neared Redding, the mountain began to loom up. At 14,000+ feet, it IS the landscape. I had left San Jose late enough that I would be passing the lake again near sunset. No ethereal vision this time, but bright and sharp green peaks, deep turquoise water, red iron oxide shores.  I paused to gaze on the serenity of so much water, so great a lake, then continued into the gloaming, toward the great snowy dome glowing before me, catching the last rays of light. As soon as I crossed the ridge on Highway 89 and entered the mountain’s climate, I had to turn on the defroster in the car; the dew point had shot up. As I approached McCloud, the navigation informed me I would be at my destination in two minutes. Really? I thought, I am in a forest, no lights visible of any kind. And then I did, indeed, arrive in the old logging town of McCloud, founded in an area that had been pretty well clear cut back in the day. It was first spelled McLeod, after the Scottish boss who ran the mill company. Later a cartographer named McCloud came along and simply put his own spelling on his map, and it’s been McCloud ever since. Interestingly, McLeod is what comes up in my iPhone’s autocorrect. Someone has some pull. 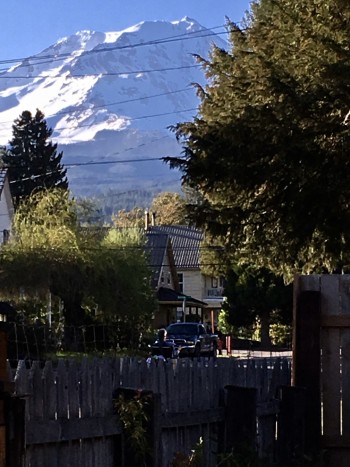 After my warm welcome at my friend’s home, I spent the first day in deep rest. I enjoyed the little differences of the place: the water from the tap SO soft, so pure, no minerals, and very high pressure. Until late afternoon, I ventured out only to peek up the street – yes, still there. Still massive. The mountain rests quietly in the background amid the signs of civilization. Even power lines cannot diminish its presence.

To be on the very flank  of such a huge mountain left me a bit breathless. I felt that I must approach it with great respect. This mountain speaks of water and earth, but it is part of the great “Ring of Fire” that circles the Pacific Ocean. Its volcanic formation is the same as Mount St. Helens’ which exploded in 1980. Legends attach to this mountain like the lenticular clouds that float around its peak. Some people say they see a Sleeping Lady on its face, but the light has to be just so to see her. It is easy to see how magic and vortexes have attached to this place. And yet I felt it simply as a place of big Earth magic. No extraterrestrials could be as strange and wonderful as the fact of this lone mountain, rising up like infinity from the evergreen forests. It stands alone, not much consorting with other mountains, but seemingly a single mountain, iconic and vast. 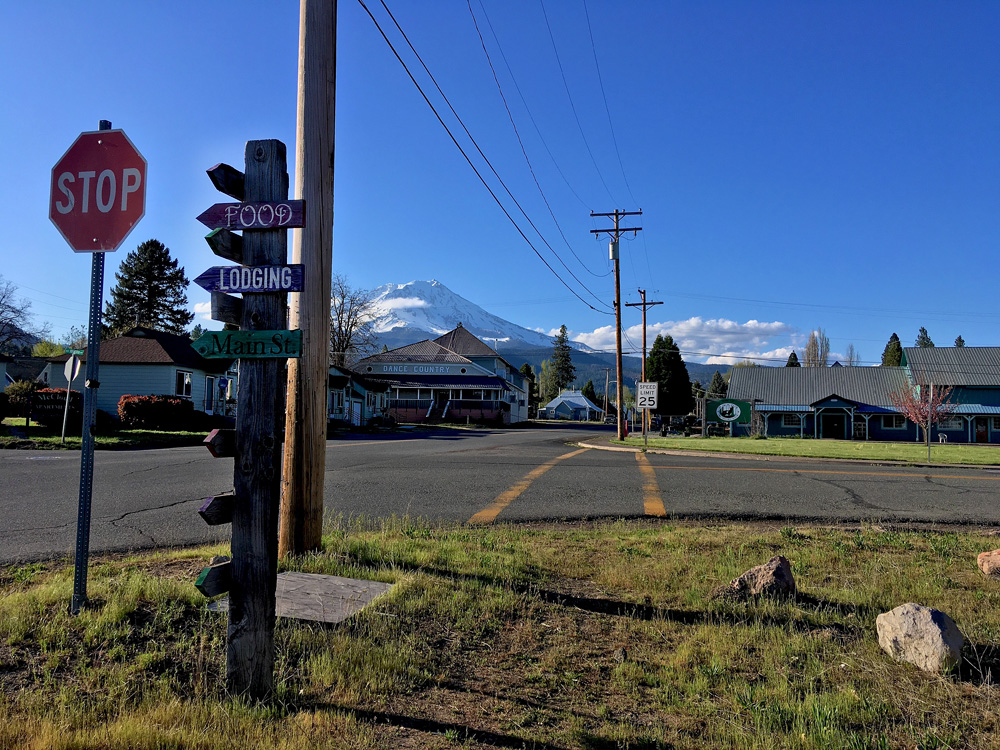 I heard bits of local lore that felt true: that the first peoples of the area would not venture above the timber line, honoring it as a place so holy that it is left alone. 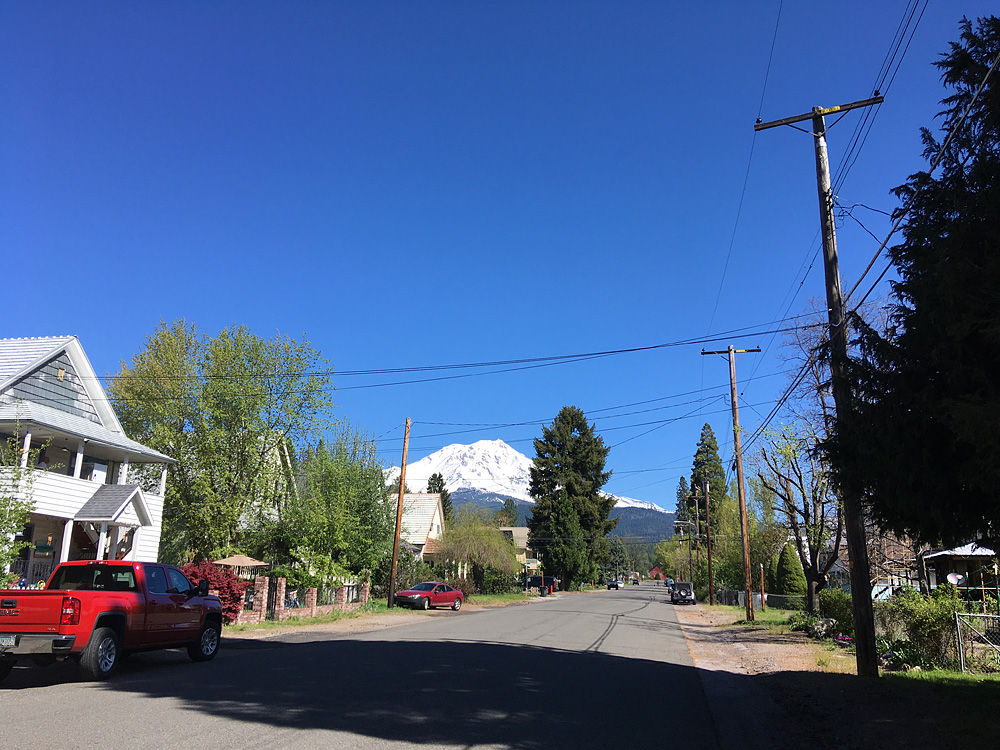 I traveled a bit around the mountain’s flanks, along Highway 89, so close to the mountain peak that it changed perspective as we drove by it. The afternoon after my class we went over to Mount Shasta City to have lunch and visit the crystal singing bowls at a shop, a unique and astonishing experience.

And there was water everywhere, being spring, plenty of snowmelt filling the rivers. 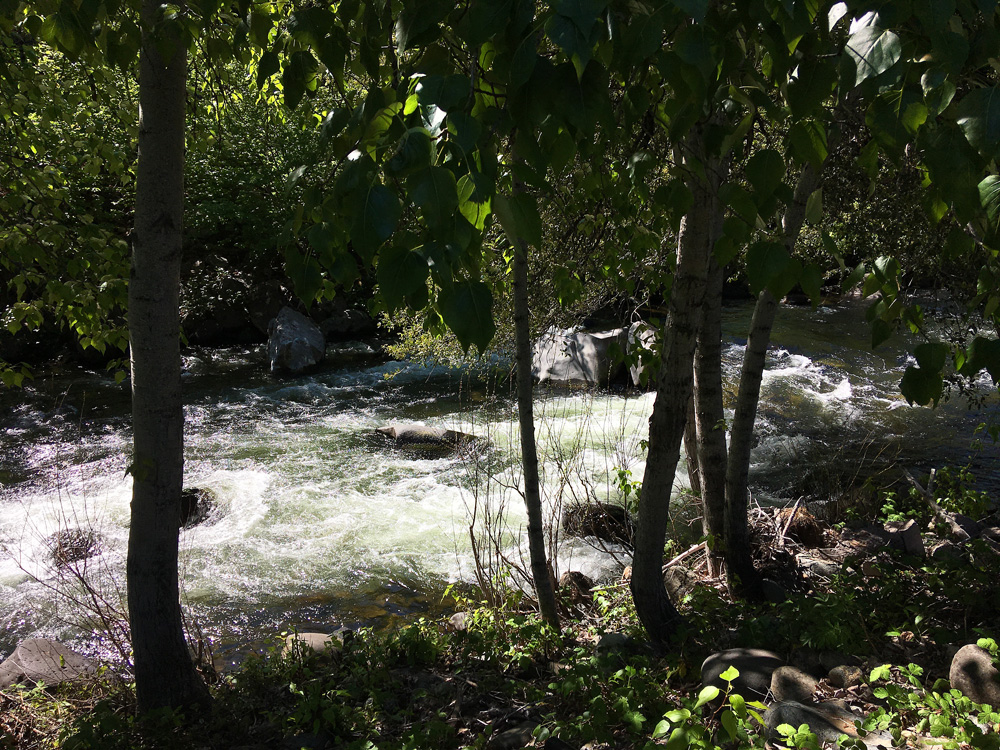 The wild Upper Sacramento sang over the rocks as we visited a neighbor in Dunsmuir, whose back yard this is. The wildlife is coming back after the terrible poison spill from a tanker train car accident in 1991. 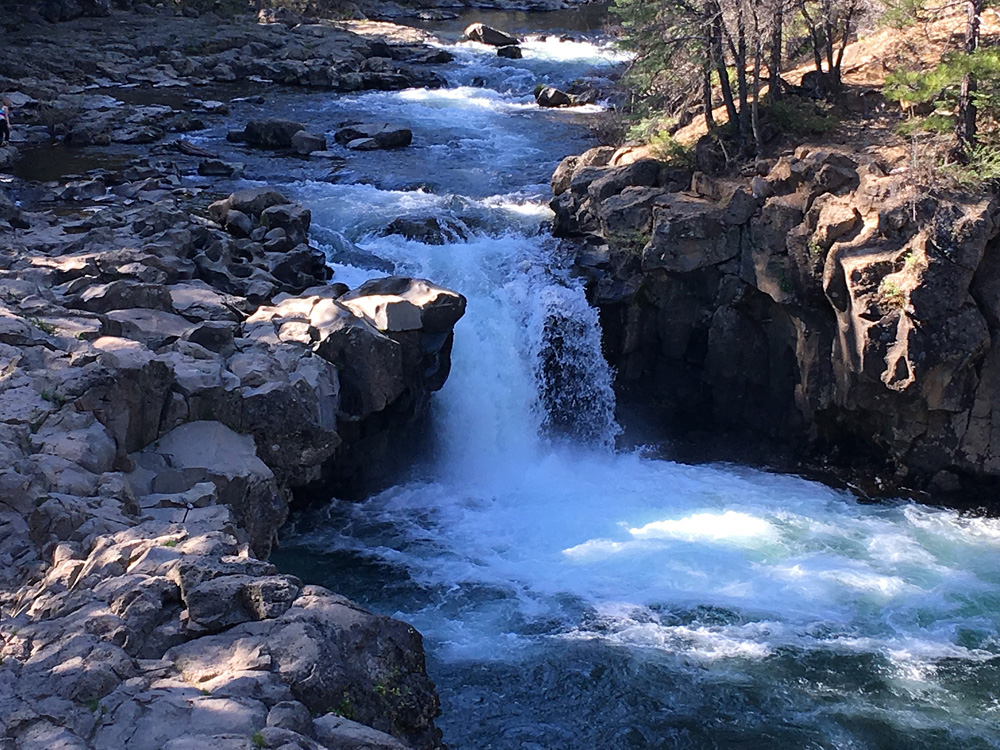 The Lower McCloud Falls, one of three big waterfalls on the river, was picture perfect. 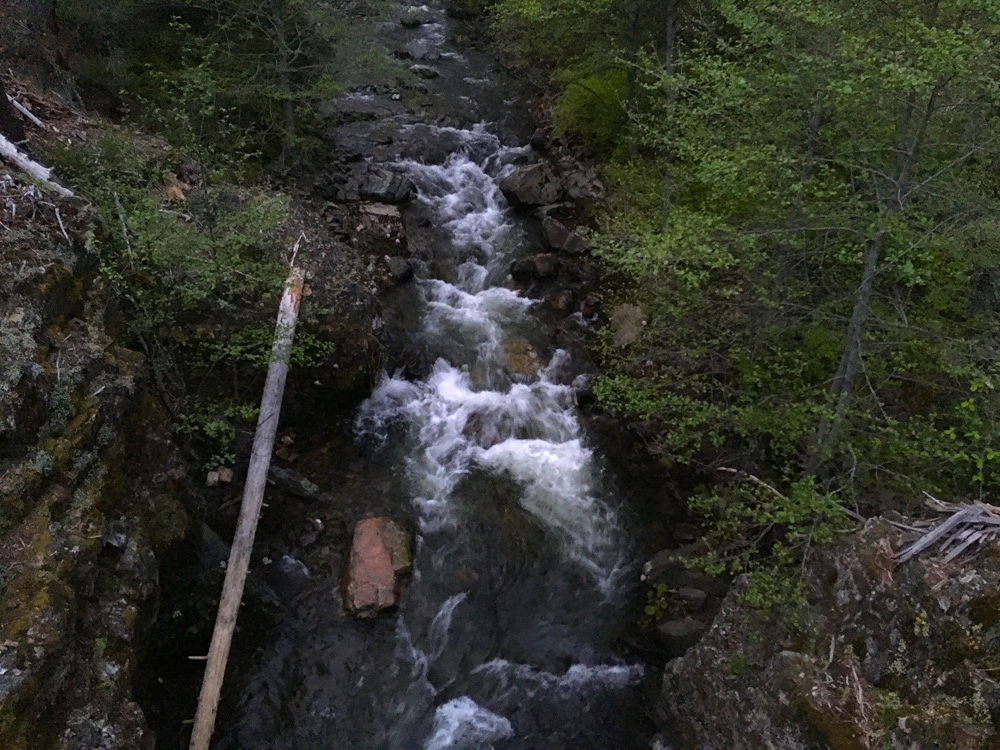 The wild Squaw Valley Creek, renamed by the National Park Service to Cabin Creek, was by turns serene and boisterous during our twilight walk alongside it. According to the fisherman among us, the river is full of trout in its quieter pools, but there is no longer any salmon, because of the dam. Here I found a talismanic rock  on a bridge approach, over the wild river. These are the best souvenirs for me, a rock or a feather, a cone or a twig. All the earth is holy land, but different places have their own stories. Traveling to them opens us up to those narratives, however they come to us. 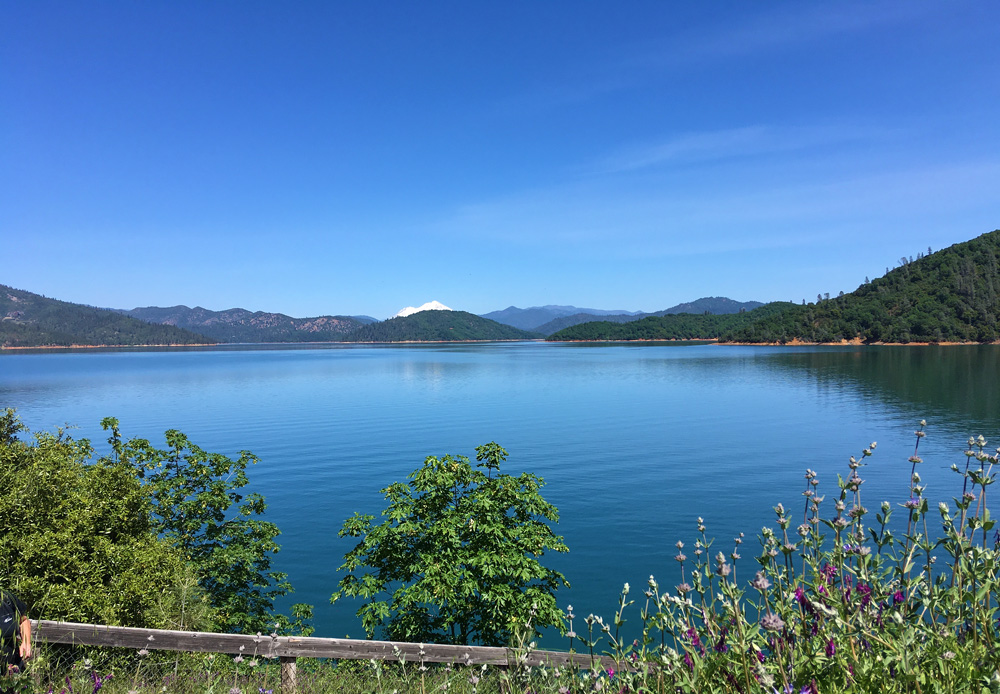 On my way home, I stopped about 50 miles south of the mountain to have a closer look at immense Shasta Lake, a manmade reservoir holding the largest amount of California’s drinking and irrigation water. I was employed as a writer by the Water Education Foundation in the 1970s, which left me with a respect for the systems that water California’s cities and fields. Paying homage to the headwaters of our state, both natural and manmade, was part of my journey. And Mount Shasta is, for better or worse, California’s water mountain. 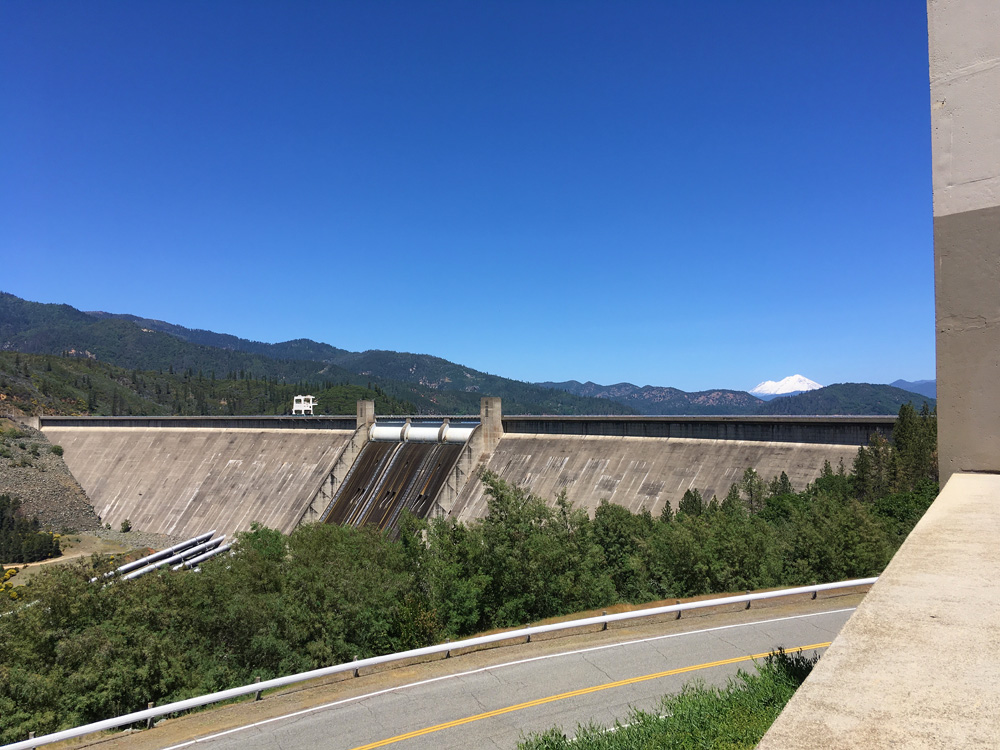 The massive Shasta Dam, with the mountain in the distance, is at the top of the Sacramento Valley. A plan to raise this dam another almost twenty feet is quite rightly very controversial, a story you can find in the California water news, but which I will leave alone for the purposes of this post.

There are many, many stories about Shasta and its waters, but I am happiest with the oldest story I can find, from the first peoples. This one comes by way of a settler who went and lived with the native people for a time in the 19th century.

They say the Great Spirit made Mount Shasta first. Boring a hole in the sky, using a large stone as an augur, he pushed down snow and ice until they reached the desired height; then he stepped from cloud to cloud down to the great icy pile, and from it to the earth, where he planted the first trees by merely putting his finger into the soil here and there. The sun began to melt the snow; the snow produced water; the water ran down the sides of the mountains, refreshed the trees, and made rivers. – Mount Shasta’s Creation Story, Joaquin Miller, (1873), by way of Legends of Mount Shasta

I basked in the mountain’s presence, its ever-changing face in the various lights of day, its felt immensity in the darkest night. During my much-needed rest that first day, I had a revelation about a writing problem, and wondered if just getting far away from home for a while opened that particular door of perception, or if the mountain was whispering to me. Probably a little bit of both.

Second photo of the mountain by Carolyn Carl, from her front yard, and many thanks for making this a really memorable and comfortable trip!