View of a Labyrinth 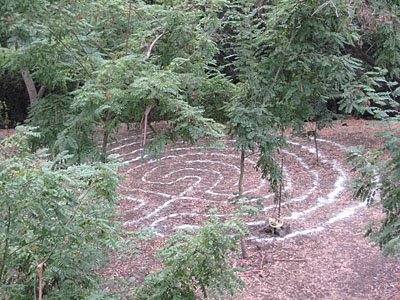 Here is a view from my backyard deck taken a couple of weeks ago. It’s a different kind of creation with line than my usual calligraphic ones in ink.

I made this labyrinth on September 11 for several reasons: in memory of those who died on that date; to ground my anxiety while a dear one went under general anesthesia, and to practice making a walkable one for the first time. Previous to this I had only drawn labyrinths on paper. I took a few wrong turns in the making, and had to scuff out some lines, but it finally came together. I used corn meal and flour. It turned out a bit larger than I anticipated, so the trees are “woven” into the outer rings. When you walk it, the tree rises up as an obstacle; you kind of embrace it as you go around it. After almost three weeks the lines are fading away.

This is a 7-circuit Cretan labyrinth. Sometimes it is called a classical labyrinth to differentiate it from medieval designs such as the 11-circuit labyrinth in Chartres Cathedral. This image is found stamped on coins from the Minoan civilization at ancient Knossos in Crete. Sometimes it drawn square. It is also very close to a design called Man in the Maze woven by the Tohono O’odham people of the American Southwest into their baskets. I like this older labyrinth; it seems more organic, and more closely related to other ancient marks that are very feminine. The labyrinth can be seen as a symbol of death and rebirth. Unlike a maze, there is only one path to the center and the same path out. In turning and changing directions, coming near the center and circling out again, the mind quiets.

I am fortunate to live in such a lovely woodland creekside area. Though you can’t see it, Coyote Creek is the dark area beyond the trees, well populated by mallard ducks and one goose with a red wattle.

Addendum 10/26/08:
My friend Wini wins the prize for telling me yesterday the correct name for the “goose with the red wattle” – it is not a goose but a muscovy duck. She was even able to describe this duck’s characteristic behavior, of hanging around the fringes of other duck colonies, like our numerous mallards, but never quite joining in, being a bit separate. Thanks, Wini!