Two New Bookworks of the West 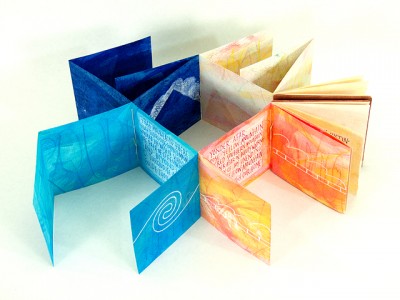 I’ve added two galleries to my website showing new artwork. These books take as inspiration poems by Mary Austin, a writer of the West from the late nineteenth and early twentieth centuries. She wrote famously and lyrically of the American West and especially the desert, first of the eastern Sierra in California, and later of northern New Mexico. She moved to California as a young woman and entered into a lifelong fascination with the landscape and its native peoples. Pilgrimage Song, above, is a reflection of what she called a “re-expression of Amerindian song” danced by the women at Tesuque Pueblo. The book is designed to fold out to show the four sacred mountains of the song, and the sacred space created in the center, like the pueblo plaza during the dance to call in the four directions. The poem’s use of color to call out the mountains inspired my use of colorfully painted paper, decorated with symbols and simple monoline lettering to evoke the dance. 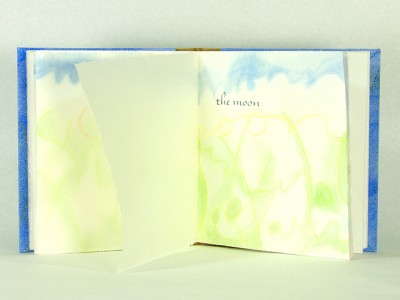 The second book, Whisper of the Wind, is a single-signature codex, with a piece of translucent handmade paper in the center spread to give the feeling of the moon’s pearly light. Mary Austin worked as a schoolteacher during her early days in the Owens Valley of California and wrote poems with the children about the place where they were growing up. The English canon did not seem to include these new children of the West, so she set about writing a new one. Below is a detail of the colophon page, showing a bit of the “landscape line” I followed. Mary Austin often felt the land speaking to her and her work answering. All of the illustration of this book was done with this line, using watercolor pencils to draw abstracted lettering slowly across the page, then pulling the color out to seem like the wind. 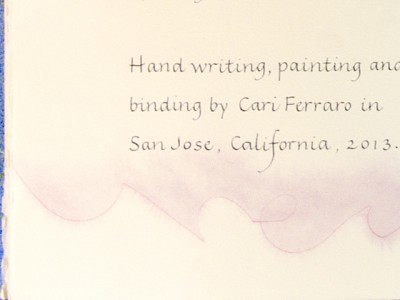 Of this “landscape line” Mary Austin wrote, in The American Rhythm, “It is this leap of the running stream of poetic inspiration from level to level, whose course cannot be determined by anything except the nature of the ground traversed, which I have called the landscape line.” The “tribal lays” which she collected and studied were “singing in tune with the beloved environment, to the measures of life-sustaining gestures, taking the material of their songs out of the common human occasions, out of the democratic  experience and the profound desire of man to assimilate himself to the Allness as it is displayed to him in all the peacock splendor of the American continent.” Mary Austin’s writing has been a rich source for this twenty-first century artist who was also transplanted from the middle of the country to its western edge at a young age.

Both of these books will be showing in the Hand Bookbinders of California members exhibit beginning June 18 at the San Francisco Public Library. Opening reception is at 6 p.m. in the Sixth Floor Gallery. Hope to see you there!