The Yearly Descent into Darkness 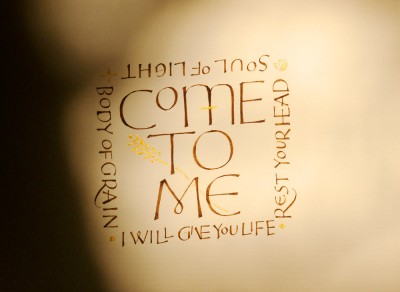 – Demeter and We
in my own lettering

At the autumn equinox this year my thoughts turn not to equanimity but to darkness. At this time of the year, Demeter, the great Mother Goddess of ancient Greece, bids farewell to Persephone, her daughter, who begins the Kathodos, her yearly descent to the underworld. In the classical tale, Hades, the god of the underworld, abducted the girl as she was picking flowers in a meadow. When Demeter discovered the deed, she began a long journey to search for her missing daughter. In her grief and absence, she failed to nurture the crops and the land withered. Finally Hecate, the goddess of magic, protection, and the crossroads, fetched Persephone and returned her to her mother. But Persephone had eaten some seeds of the pomegranate, requiring her return to the underworld for half of each year.

This is one of the great stories of antiquity. Modern readings have questioned the abduction, suggesting that Persephone went willingly to become the queen of the underworld. Classical carvings and paintings show her sitting on a throne next to her husband Hades. Mythologists and psychologists, like the ancient Greeks who enacted the story in ritual at Eleusis, have found a wealth of symbolic material in this story.

One thing I have learned about Demeter is that she herself does not go to the underworld to find her daughter. Hecate travels there to bring back Persephone. Demeter embodies the Earth, and it is not her work to travel to the “Great Below,” as the Sumerian goddess Innana did in older mythology.

Some who find themselves in the dark choose to stay for a while, to learn the rich wisdom the dark can offer. We enter the dark every night when we sleep and dream. The earth herself spins through the daily cycle of night and day, and in her annual orbit gives us the seasons as we journey around the sun. Darkness and light are each a part of life.

Demeter is known for her grieving, her pain, and her wrath in the Persephone story. The verse above dearly speaks to a mother’s love, her joy and her magic. Being a mother, even an Earth Mother, is all of these things, bright bits and dark bits.

And what if your child of light chooses darkness? And what if darkness chooses her?