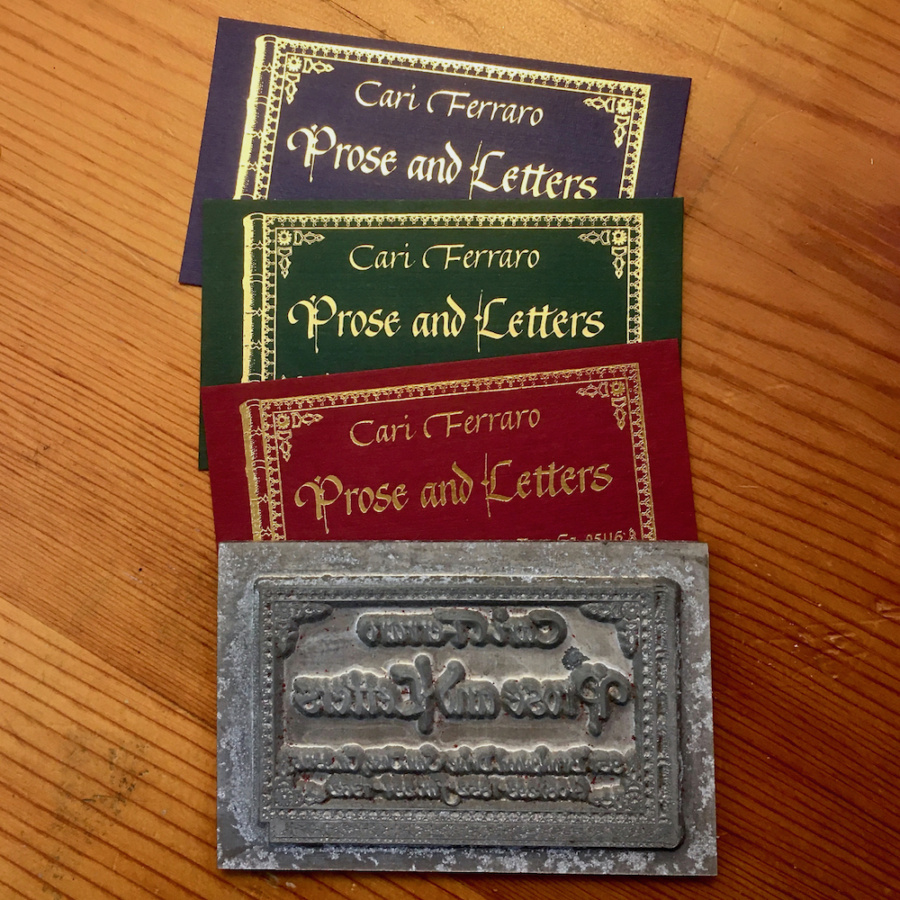 Words, especially their origin and usage, are endlessly fascinating to me. Naming my newsletter was an exercise in etymology and personal history. I have named my inaugural newsletter The Prose Dispatch, to honor my roots in many ways.

Prose: commonly denotes written language that follows the natural flow of speech; often defined as not being poetry or metrical language. Its source is the Latin prosa oratio,  “straightforward.”

Dispatch: to send a message speedily and importantly.

When I was still a youngster in Ohio, I was taken on a school field trip to see the inner workings of The Columbus Dispatch newspaper. I can still see, in my memory’s eye, a big open sunlit room where the editors and writers worked, filled with many people and a bustle of purpose. And my memory’s ear still thrums with the great sound of the presses rolling in an even bigger room. Incredibly, we were given a packet of goodies to take home and in it was a metal die, the first I had ever seen, with the masthead of the newspaper in reverse stamping form. Even more unbelievable is that I cannot lay hands on it anywhere among my things anymore, more’s the pity. I know I kept it, a talisman of the printing trade I had been introduced to that day. 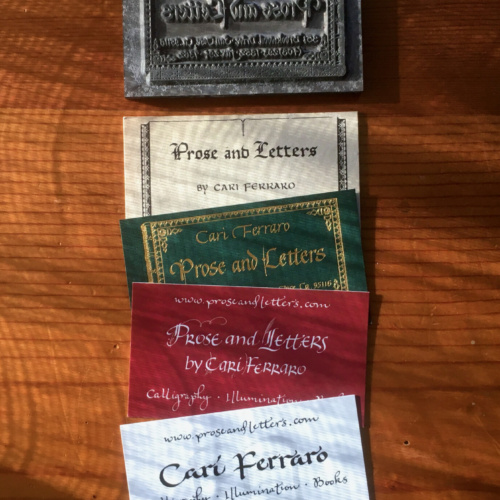 That die is probably the reason I had a die cast for an early Prose and Letters business card, which I used to stamp my company name in shining gold ink inside a clip art book logo on burgundy card stock. Later, because dies are so indestructible, I had more cards printed on dark green and navy blue stock as well. Finally the contact information became obsolete and so did the die. It was an indelible lesson in the meaning of the term, “the die is cast,” for no changes could be made. It too became a talisman of a time past.

A look back at my business cards over the last forty years of working as a jobbing scribe shows some progression in my style. I began with clip art, but eventually learned the skill of making my own pen-drawn book. For a while I called my business Prose and Letters by Cari Ferraro, and then finally just took my own name. The last card is now out of date also, as I merged my old website with my present one in 2018. Now all of my endeavors are under one … masthead.

Masthead: Another word for nameplate, meaning the display title of a publication, appearing at the top of the first page. In the digital age, it is often also used to mean the names of the creators of the publication. The word derives from a ship’s central mast, to which the flag was affixed. 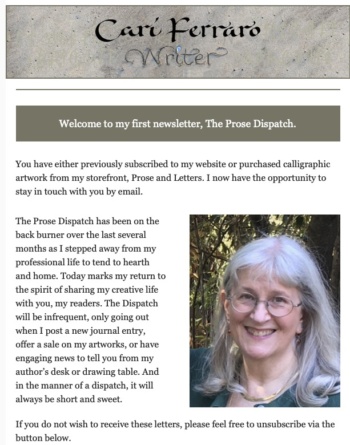 I have waded into newsletter publication because my subscriber plugin broke in June last year. Two of the three posts I published in 2021 might fill in a few blanks about my doings, so you are welcome to visit Moving and Not Moving, and A Grateful Heart. Posts were few and far between, as I scrambled to move into a new space, clean out the garage to make storage, direct a partial house remodel with multiple contractors, and by the by, become a new granny twice over in 2021!

I hope you will bear with me while I figure out the fine points of this kind of publishing. I’ve already jumped ship and abandoned MailChimp after my first newsletter attempt, and am now using MailerLite which I find much more friendly and helpful in every way. I think you’ll prefer it too. I may tinker with an RSS newsletter, but for now need to keep it all manually generated until I know what’s what.

If you’d like to set a spell with me, click over to the Subscribe page and sign up to receive these missives. I would be glad to welcome you to my circle of readers.