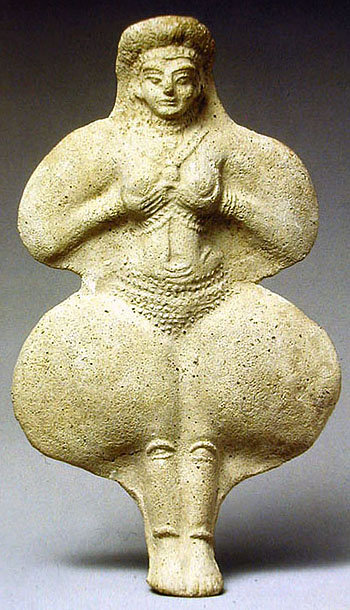 This terracotta figure and many others like her were found in southwest Iran, in the ruins of Susa, the great city of ancient Elam. She is about 4000 years old. Because of our modern ideals of feminine beauty, some people will look at this image and see her as fat. I see her body shape as a metaphor. Her inner shape is young and curvaceous, she offers her small but full breasts in her hands. She is adorned with jewelry as a maiden would be, her pelvic girdle patterned with meaning. She seems to wear a crown. The great swellings that give her a violin shape are the power she possesses in her upper and lower torso, her nourishing breasts and her life-giving womb. Her breast-offering position goes back to stone age images and across cultures.

Elam was contemporary with Babylonia, a bit further north. The Elamite religion, according to one classical writer, was “characterized by uncommon reverence and respect for womanhood.” Elamite goddesses were called Kiririsha and Pinikir, but I first knew this image as Inanna or Ishtar. Though her identity is not firmly documented, she is clearly from the “cradle of western civilization.” Her own posture affirms the tremendous bounty of her womb. She is the Queen of Heaven, the Sea, the Earth and the Underworld. She is very likely the ancestor of the goddess for whom the women in the biblical book of Jeremiah baked cakes so that all would be well with them.

These five figures are a bit more naturally shaped, but in the same posture. There were about two hundred of these figurines found at Susa. These look like they were made from a mold, and are probably about hand size. The number of them found suggest they were in common use not just in temples but in home altars. 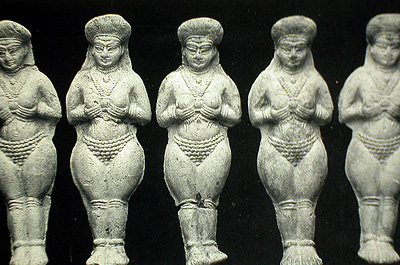 Because of recent events in Iran, it seemed to me imperative that I dedicate this powerful image to the women of Iran who, with their men, are taking to the streets to reclaim their country from fundamentalist extremists. Islam as it is practiced by those in power is patriarchy in its most extreme and bitter form. The death of Neda Soltan on June 20 has become a symbol of potent anger. Her name means “voice;” women are forbidden from singing publicly in that society, so she was taking singing lessons in secret and was with her teacher when she died. Her death gives voice to many women living under iron-fisted Islam, who must hide themselves in fear. As she died she repeated, “I’m burning, I’m burning.”

This Reuters news image captures the conflict: a young woman on the ground, in blue jeans and head scarf, while an old man points his cane at her, in apparent anger, perhaps lecturing her. This and other images of the protests in Iran can be seen here. 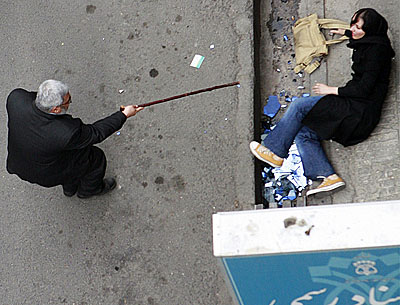 My heart is heavy over these events. I lived in Iran for a short while in the sixties. That is a story for another time, but Iran was my home, however strange that sounds, for a little while, and there was much beauty there and wonderfully kind people. Their history is long and proud.

I send this bit of herstory to the women of Iran, and the men who love them, to keep courage and know their strength. Listen to your women, men of Iran. They come from an ancient lineage of powerful, royal, justice-loving and life-giving women.

Body wisdom: the Great Mother nourishes us all. May her wisdom continue to rise up from the deep past and inform our young women with courage. Stand proud on our wide solid foundation, which radiates out in waves. If you are a woman, try tracing the outer shape of this goddess around your own body. It is the gesture men have made for centuries to describe the womanly hourglass form. 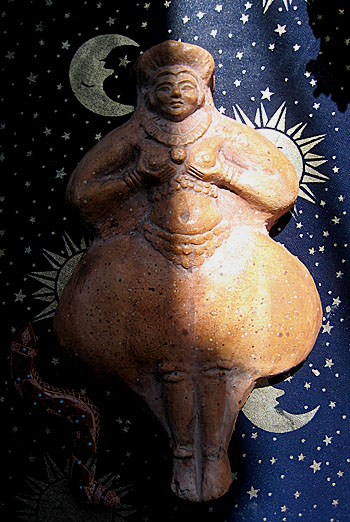 Juno’s Moonday School ends today, at least for the moment. The studio beckons and I’ll be spending more time there than at this keyboard. I hope you’ve enjoyed this handful (well, two hands full – ten) of goddesses from the deep past, my gift to you for the month of June, and my prayer that all women will remember their power and learn to love and honor their own body wisdom.

Top image, in the Musee du Louvre, Paris. Image courtesy of Max Dashu at Suppressed Histories Archives, with deep thanks for her many years of scholarship and dedication to herstory.
Second image, probably from The British Museum, London; found here.
Bottom image: terracotta image made by Constance Tippett. From a recent new moon dedicatory altar, showing the light and dark sides of this goddess. Go to Constance’s Goddess Timeline website and click on Art Gallery to see her recreation of many ancient goddesses in clay.
Asphodel Long’s research on the Canaanite goddesses is worth reading, as is information at the British Museum about Elam in ancient Persia. And there is plenty on the internet about Inanna/Ishtar: the Sumerian Hymns to Inanna are some of the earliest writing ever translated.