The Goddess of Love at Beltane

It’s May, it’s May, the lusty month of May! The Goddess of Love is abroad, and the God of desire awaits Her in the woods.

The sun is waxing, the land is full of flowers, the trees are alive with birdsong and the hatchings in the nests. In the old traditions of the British Isles, the young people are stealing away to spend the night in the woods, bringing back arms full of flowering hawthorne at dawn to deck the doorsills of their neighbors.

John Cutrone, of the Convivio Book of Days, describes this cross quarter day as the time when we spring to summer, just as the opposite cross quarter day helps us fall to winter, at Samhain, or Halloween. As with most festivals on the Wheel of the Year, they are a “tide” over three to ten days. Astrologically, Beltane falls more exactly at the midpoint between the vernal equinox and the summer solstice, around May 5. We are at the beginning of summer here in the northern hemisphere, for the next turn of the Wheel brings Midsummer and after that the days will begin to shorten. 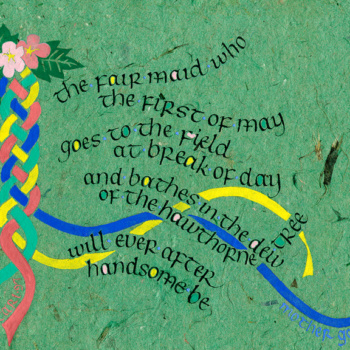 It’s been many years since I made the artwork here, back when I first unlocked the secret of drawing Celtic knotwork.

The fair maid who the first of May
goes to the field at break of day
and bathes in the dew of the hawthorne tree
will ever after handsome be.

This is an old nursery rhyme, usually attributed to Mother Goose. Her origins are lost in the mists of time, but it might be that this grandmotherly keeper of old stories, encoded in rhymes and nonsense for children, can be traced all the way back to the great goddess Aphrodite, the deity of love, seduction, desire and beauty.

The lovely image at the top of this page shows Aphrodite riding sidesaddle on a goose and holding a flower with a bemused look upon her face. You can just see her name inscribed in tiny Greek letters to the right of her image, painted within a ritual drinking cup, circa 460 BCE. 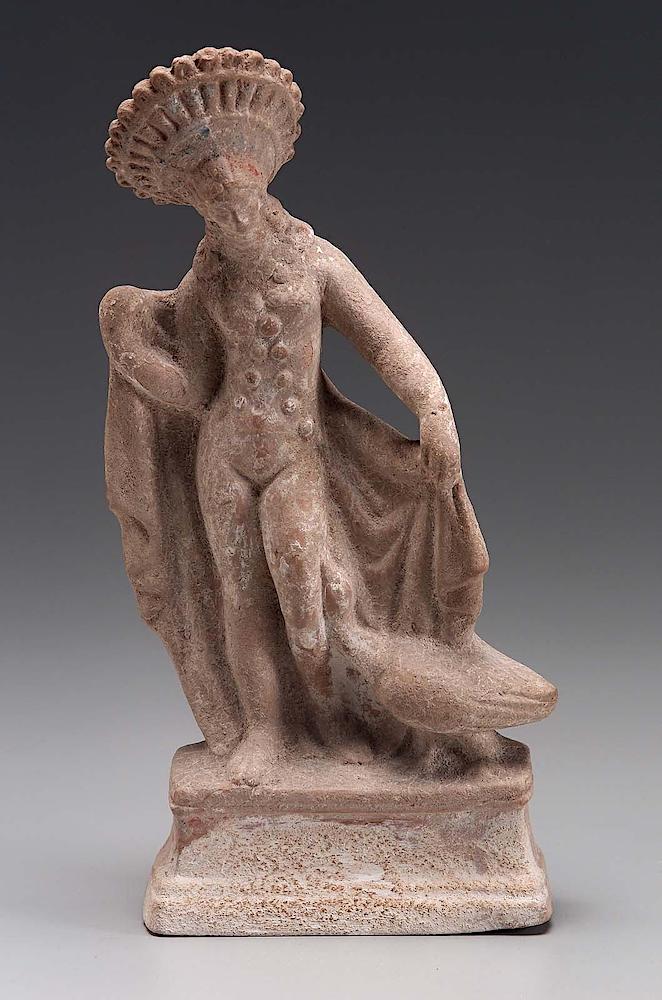 There are many, many images of Aphrodite with her goose, including this charming one of her garlanded and wearing a glorious crown.

Or this one, as the regal queen, standing upright on the back of a goose in flight, holding a casket of gifts. 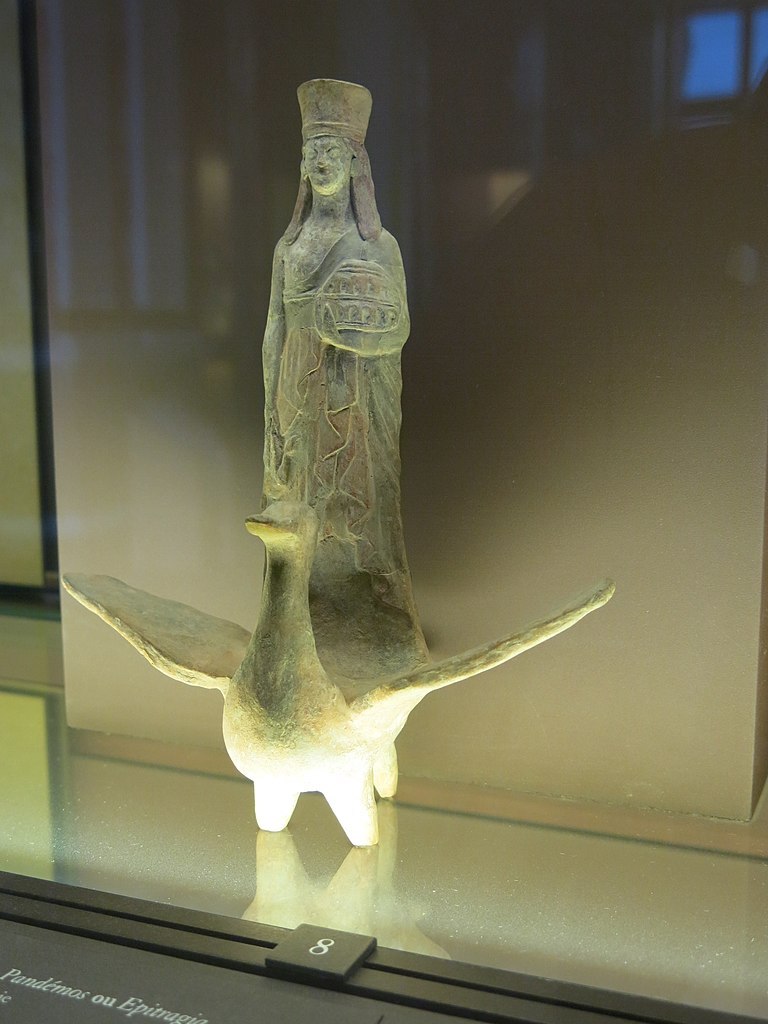 This goddess is often written of or shown with flowers, further linking her to the floral celebrations of May. From the ancient texts:

She [Aphrodite] clothed herself with garments which the [other goddesses] had made for her and dyed in flowers of spring–such flowers as the Seasons wear–in crocus and hyacinth and flourishing violet and the rose’s lovely bloom, so sweet and delicious, and heavenly buds, the flowers of the narcissus and lily. In such perfumed garments is Aphrodite clothed at all seasons. . . They were appeasing the goddess by strewing wreaths and single blossoms before her, and they formed a most elegant chorus-line as they sought to please the Mistress of pleasures with the foliage of spring.

Aphrodite has been reduced in our modern thinking to being “merely” a sex goddess – yet truly, what better presence at this sexiest of holidays? – but she is one of the original twelve Olympians in the Greek pantheon and was very likely adapted from an older, many-faceted Mother Goddess from Asia Minor. One of her earliest titles is Mother of All Living, a name which was also given to Eve in the Garden of Eden. 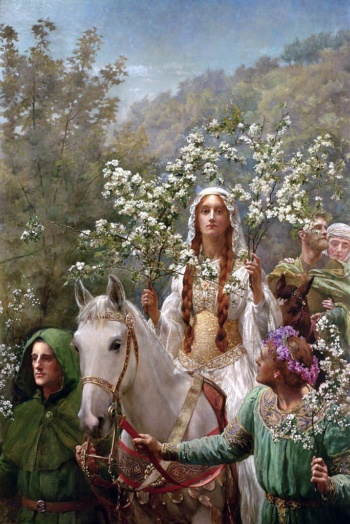 Regal queens and sensuous goddesses have been a favorite subject in art for thousands of years. Here is “Queen Gwinevere’s Maying” from a 1900 painting, a relatively modern image of a medieval European love goddess. Her solemn expression may speak to the havoc her power had to excite such desire and strife in the court of King Arthur and his knight Sir Lancelot. If desire and love drive the world, it can also bring woe and destruction.

By the by, it is Gwen, played by Vanessa Redgrave in the movie “Camelot” and Julie Andrews in the original stage production, who sings out the song (apologies for the ads) that is the soundtrack in my mind every year when May rolls around. And how not, with the talents of Lerner and Loewe and the magic of Broadway and Hollywood to bring us these old stories?

I have always thought that Beltane (or as it is called in Ireland, Bealtaine, pronounced ‘bay-al-tan-a’ in west coast Irish) was one of the fully pagan holidays never syncretized by the Christian church, as were many other old holy times. But that was before I discovered this photo of a yearbook on the Ancestry website while researching a long-lost family member. How sweet is this! 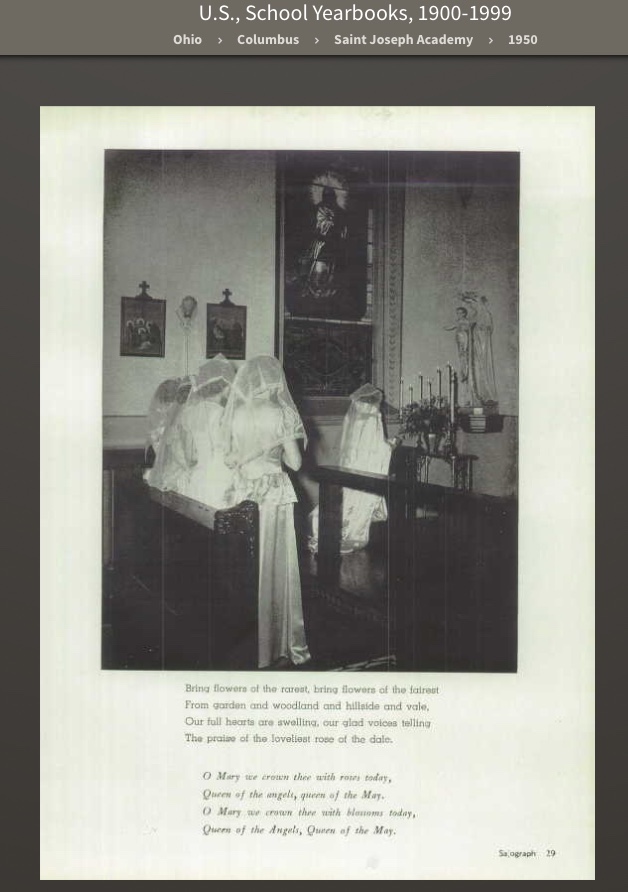 Here the Virgin Mary is cast as Queen of the May, being given homage by innocent girls draped in white. Mary is the form of Goddess who has endured the longest, in the most unfriendly of religions, overlaid with a chastity narrative that seeks to hide her deeper story. If ever there was a Goddess of Love, Mary is one of the most loving.

Bring flowers  of the fairest,
from garden and woodland and hillside and vale;
our full hearts are swelling,
our glad voices telling
the praise of the loveliest rose of the dale.

The goddesses of love are all around us, doing their best to remind us of the generative power of love, the sacred function of fertility and the creative magic that drives the universe. 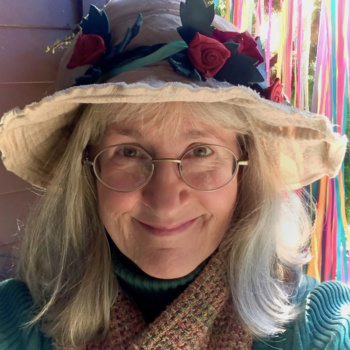 These days I am especially fond of the Goddess of Love in her Mother Goose form. I admit to being tickled pink when this photo of me from Beltane morning in 2019 brought the comment from a friend, “This is exactly how I picture Mother Goose looking!” I will be the storytelling goddess any day, and gladly. The sillier the rhyme, the more I like it. Best for remembering!

And I was wed at Maytide, lo these many years ago, all unknowing of the lore but ready to enact the sacred marriage and create the children I had always wanted. Now they have both given me children of their own for me to granny, and you can be sure I will be telling the little ones about the goddesses of love when they are old enough. I am an old May Queen now, but truly the magic of May stirs in me as if I was still a maiden invoking Aphrodite in my marriage bed. Like nearly everyone in the world, I love to celebrate Love and see its flowers and fruits come forth around me. 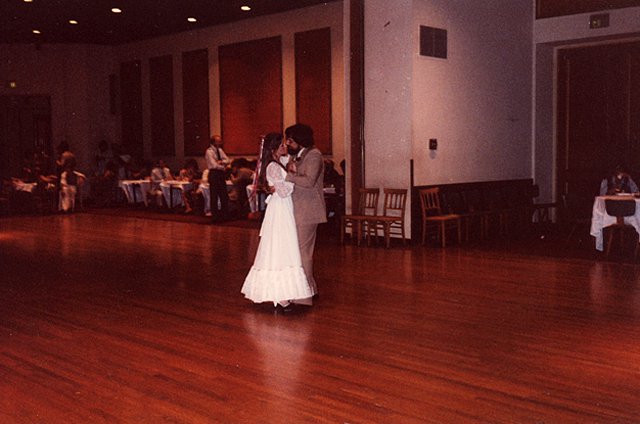