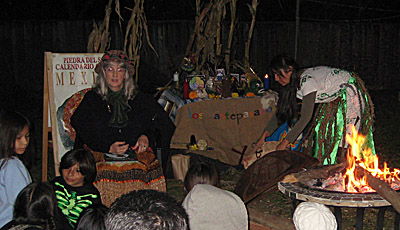 We celebrated Halloween this year with our neighbors, who have a group called Los Antepasados, the Ancestors, and are keeping the old indigenous Mayan and Aztec ways alive. They also run our local food coop, or CSA (community supported agriculture), and much of the ceremony was in Spanish. There were paths of luminaria, an altar, a sacred fire, storytelling, drumming, singing, feasting (Pat’s pozole was the hit of the evening), and celebrating the old ways under an almost full moon. There was no candy or trick-or-treating. In the picture above I am preparing to read a story, wearing my funny witch’s hat (no, it’s not tall and pointy!). To the back is the altar with symbols of the elements, photos of the dead, all the sacred things, with the name Los Antepasados appliqued in colored fabric letters to the altar cloth. At the right, Anjelica tends the sacred fire.

Today begins several days of celebration for we who celebrate the sabbat of Samhain (the ancestor of our modern Halloween) on October 31, and then the two days of Dia de Los Muertos, which the church called All Saints Day on November 1 and All Souls Day on November 2, but no doubt have much older roots, as is often the case with holidays. At this time, the veil is thinnest between our world and the spirit world. Our ancestors, who we especially celebrate and feel in our lives at this time, sometimes celebrated the solar year in various combinations of the eight parts. Samhain (the old Irish name for this time) is one of the cross-quarter days, arriving midway between autumn equinox and winter solstice. In the old calendar it is the first day of winter in the northern hemisphere, which is why winter solstice is often called “midwinter.”

Every time I go to an indigenous ceremony of the first peoples of Norte Americano, I hear about how the songs and stories and ways of these people were repressed by the invading Europeans, and how now in these more open times, they are coming back. It is sometimes a little surprising for them to hear that for people who are trying to keep the old European ways alive, the story is not so different, that women and men were persecuted in the medieval and later times for celebrating the eight sabbats, or the phases of the moon, or whatever folkway the church deemed too “wild.”

Tonight Starhawk and many others facilitated a great spiral dance in San Francisco with hundreds of people in a huge public ritual, celebrating the never-ending cycle of birth, death and rebirth. Everyone moves hand in hand, passing each other face to face in circling lines and lines of people, singing and chanting. My contribution to our neighborhood celebration was to read the story of The Last Wild Witch to the kids, the recent children’s book published by Starhawk. Witches aren’t really scary; sometimes they look just like me, or “just like someone’s grandmother.” 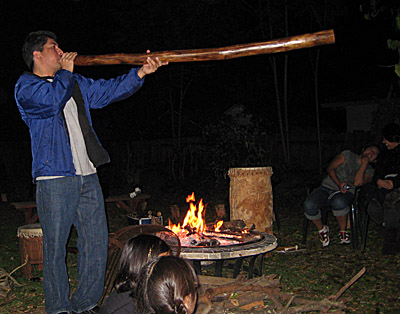 Above is one of the musicians playing an instrument that makes deep, beautiful sounds, that, if my Spanish is worth anything, was played in ancient times for a funeral. Below is a better picture of Anjelica in her costume, her face painted half with green growing herbs, and half with twigs representing the dying part of the plant’s life, and her skirt made of braids of herbs from her garden; her son and husband are just to the right. In the middle of all: the sacred fire. For how many millennia have our ancestors gathered around such a fire in the night, under a full moon, telling stories of the beloved dead and celebrating the never-ending circle of the year? In whatever language, the traditions overlap and live on. 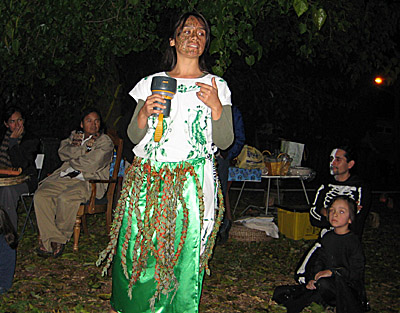