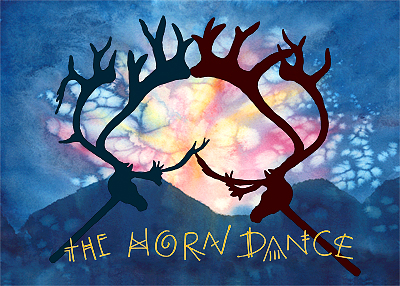 The reindeer antlers of the Abbots Bromley horn dance, shown in silhouette against the sunrise, are believed to be about 900 years old. To see the horn dancers emerge from darkness to weave the dance and quietly knock the horns together never fails to enchant audiences with the sheer mystery and antiquity of the dance.

From the dawn of time and across the globe, men dancing with antlers have ritually enacted the mystery of the hunt, the sympathetic magic of the sacrifice, the cycle of life, and the rebirth of the sun.

In many of the pueblos of northern New Mexico deer dances are celebrated, usually in the fall or winter times. These dances are no doubt linked back even further to Mayan deer dances. One of the earliest examples of prehistoric art is known as The Sorceror, a human with antlers at the Les Trois Freres cave in France dated to about 13,000 years ago.

In England the antler dance is performed in early September in the Staffordshire village of Abbots Bromley, at harvest time, though there is also historical record of it having been performed around Yule or Twelfth Night. In the United States, people are most likely to have seen the horn dancers on a twilit stage at a winter solstice Revels, accompanied by mummers in curious costume: the man/woman, the hobby horse, a boy with a musical triangle keeping time, another boy carrying a bow and arrow, a jester, and a musician playing a fiddle, a wooden flute, or even an accordion. Or perhaps they have been part of the enchantment just before sunrise on May Day morning and seen men emerging from the darkness to perform the measured steps of the antler dance before the Morris dancers begin their work of dancing up the sun.

For a series of really outstanding photos of the Abbots Bromley Dance in 2005 taken by Peter Barker and posted on Flicker, visit this page and this one from 2006.

The image above is available as a greeting card and a print this fall at Prose and Letters and will be found along with many of my other Yule cards at Revels shows around the country in December.