Texting Across the Ages 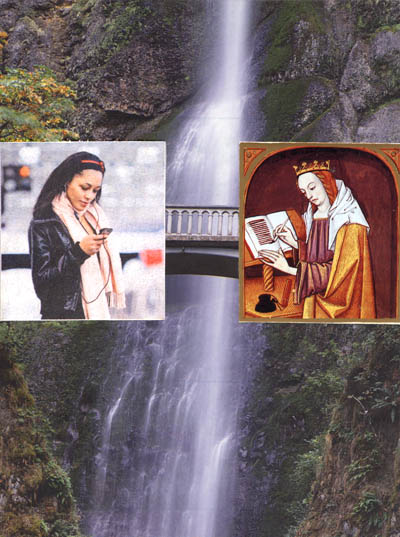 This past weekend I went up on the mountain for our biannual women’s sacred retreat. The yurts we stay in are all heated by wood stoves, so the first order of business on a cold March morning is starting the fire, and being the early riser that I am, this often is my job. Saturday morning I was wadding up newspaper to lay the fire, and in my foggy state, probably without my glasses on yet, the image on the left above caught my eye. It looked, for all the world, like a medieval nun reading her prayer book. Only after a closer look did I see that it was modern young woman texting or reading her iPhone.

Saturday afternoon we spent playing with images and making Soul Collage-type cards. In an old Medieval Woman calendar I found the image on the right. She too wears a crown and is “texting,” though her communication tools are calligraphy written with a quill on parchment. The girl on the left wears black and white clothes that at first glance look like an old-fashioned nun’s habit. The woman on the right looks to be a queen; they both seem to wear a kind of crown. The bridge connects them across time and culture, but their purpose is the same: communication. The waterfall behind them is the great river of time. Writing has taken many forms since the first marks appeared on the cave walls in Paleolithic times, but the exchange of words through symbolic marks continues in ever new forms.

Previous post: The Wheel Again will Turn Toward Spring