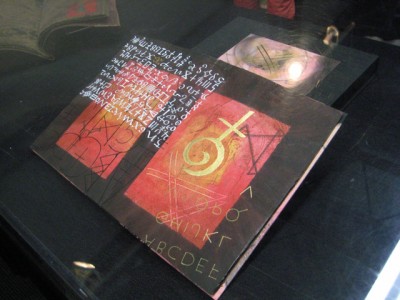 “Superstition 13, Book Arts from the Shadow World,” is a juried show devoted to the occult and magical, currently on display at the San Francisco Center for the Book. It is indeed full of mystery, not least because the books are behind glass. We can see only a page spread and that just whets the appetite for the rest of the book. The theme is large enough to include many different approaches to the subject of “superstition.” I am supremely pleased to have my magical alphabet page spread with the gilded Venus symbol in my third Spelling Words book at the center of the case in the middle of the exhibit. These pages tells the story with symbols and color alone. The works are shown without descriptive labels, only the artist’s name. The backstory can be had in the printed pages available at the front desk to take around, or in the superlative catalog. 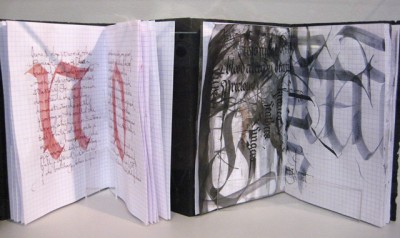 Another calligraphic entry is Chris McDonald’s Puddy Tat. The oversize blackletter on paper with a small grid tells an obscure story, combined with handwriting which gives this multiple-fold accordion book the quality of a journal. 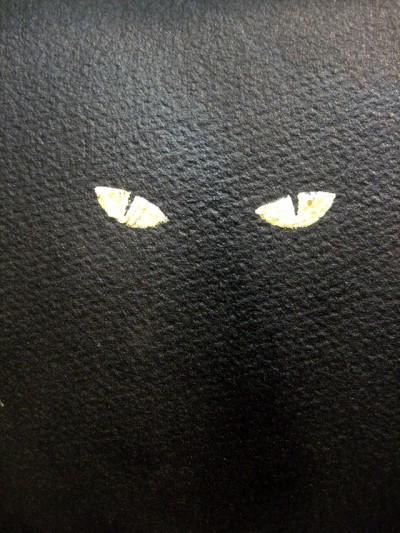 Most arresting is the black painted paper cover with the glowing cat’s eyes! 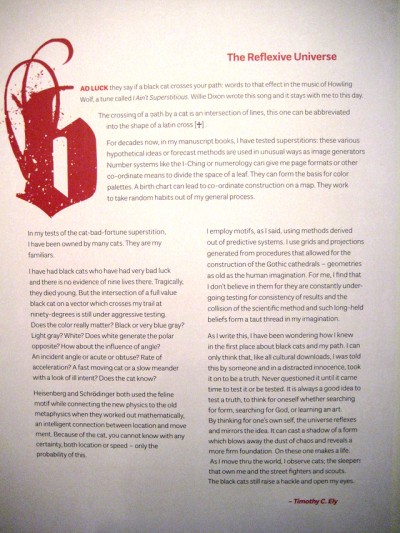 The cat’s eyes rather wonderfully illustrate juror Timothy Ely’s exhibit statement, which uses the example of a black cat crossing your path, the luckiness or unluckiness of it, the angle of the crossing, and the admonition to test superstitions for yourself, seeking for your own truth in the matter of black cats, or God, or learning your art. There are rumored to be 13 black cat images hiding around the exhibit. 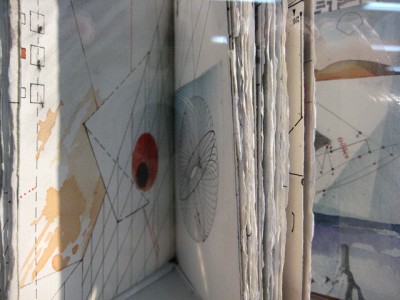 Ely’s own entry for the show, Theoria, presents a tantalizing glimpse of his fascination with occult geometric constructs within natural landscapes, above, and we can glimpse more than one page spread. 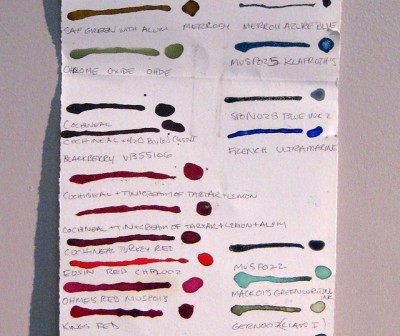 Another of the three jurors, Richard Spelker, has collected over a thousand ink-making recipes. This begins to look like alchemy, the mixing, the laboratory, the rare and common ingredients. This sample page, familiar to any artist who mixes inks or pigments, is called Inky Black Arts. Richard also supplied the outstanding bibliography in the catalog. 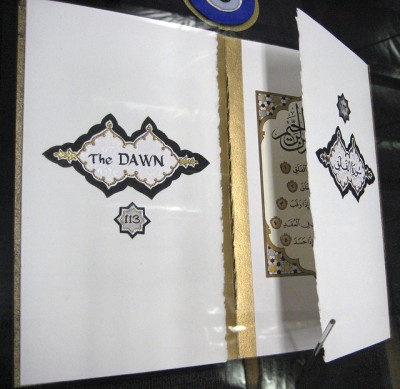 Another calligraphic-looking work (though possibly using fonts) is Tania Baban’s Prayer for Daybreak, based on Surah 113 from the Quran, a prayer for protection against the evil eye. The gatefold format allows the Arabic and the English translation to be seen side by side. 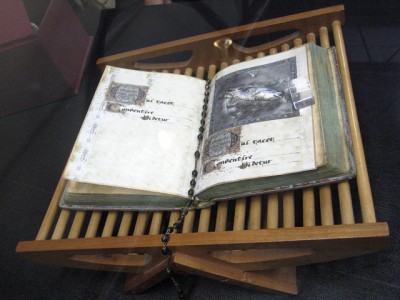 This book with echoes of European medieval manuscripts is Marguerite Garth’s Qui Tacit, Consentire Videtur (Silence Implies Consent). Fetchingly displayed as a precious medieval book might be, this modern iteration uses digital collage and juxtaposition of medieval-style images to express the artist’s concern with the break between people and nature. 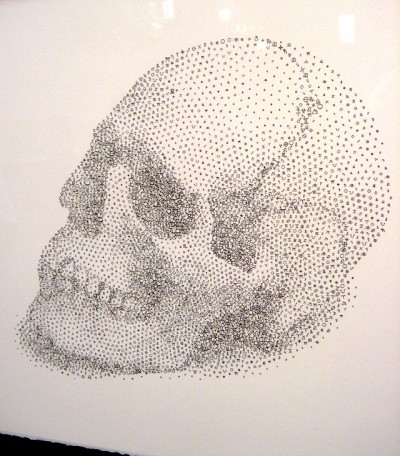 This framed piece is from Jonathan Gerken’s Skull letterpress printed book. Not the only skull imagery in the show, on closer inspection it is certainly the most intricate, ingeniously made up of letters and symbols. The other skull work in the show was made by the third juror, Grendl Löfkvist, called Memento Mori. I was not able to get a good photo of it, but her artist statement explains the use of skulls by the religious in medieval Europe as a reminder “to enjoy one’s earthly days to the fullest, and to pursue life’s dreams and pleasures with remorseless zeal.” 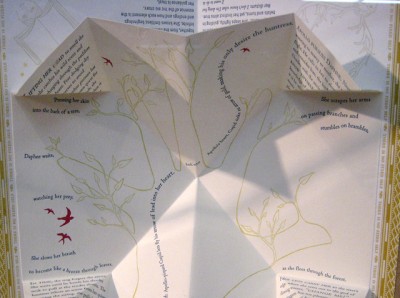 I was completely enchanted with this book by Casey Gardner entitled Threshold. An exquisite retelling of the myth of Daphne’s transformation into a tree to escape her amorous pursuer Apollo, this book uses a Turkish map fold structure to show almost the entirety of the book at one time. Still, I wished for nothing so much as to hold this book and unfold it to discover all the hidden meanders of meaning in this story. The four corners are held by the four “Meta Muses of Flux” and every part of the book contributes to the “magical landscape of shape shifting and change.” 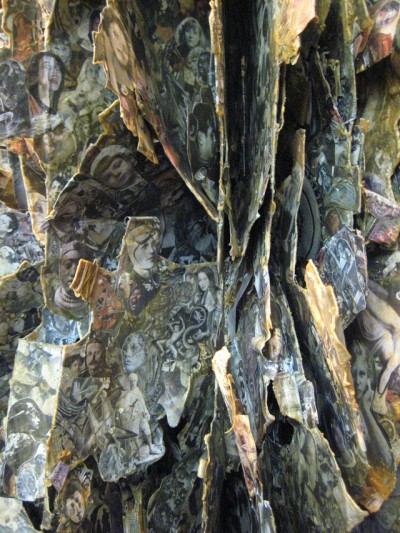 Also grappling with the theme of transformation is Mark Sopperland’s The Haunted Theater. This welter of images depicts people from the past, who, being presented thus, are not forgotten. They are the spirits of this book, made alive by us seeing their images. 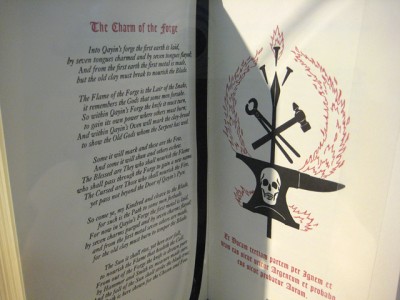 This page spread from The Psalter of Cain by Daniel Schulke seems somehow to be quintessentially occult. The hammer and tongs, the anvil with the skull, the Gothic printing, the red, white and black, the verso poem “The Charm of the Forge,” all speak to the use of high ceremonial magic. 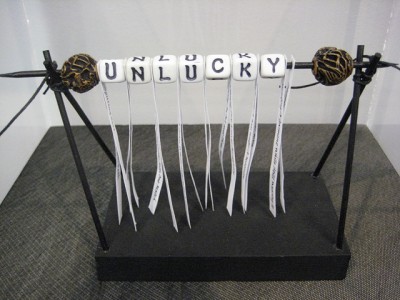 An unusual piece by Heather Crossley, Unlucky brings to mind the paper slips that appear in Chinese fortune cookies with its gathering of superstitions such as “Writing a person’s name in red ink” or “Lighting three cigarettes with one match” or “Opening an umbrella indoors.” 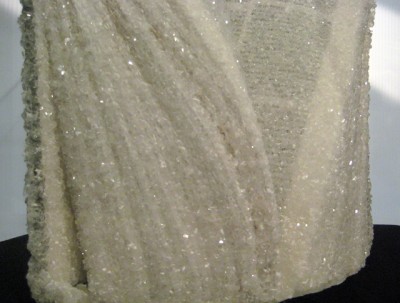 Alexis Arnold’s Dictionary of Superstitions is one of three books which “address the materiality of the book versus the text or content of the book” by making of the book a “geologic specimen.” These three glittery books (an Encyclopedia and an Alchemist’s Handbook) greet the visitor at the front of the gallery. 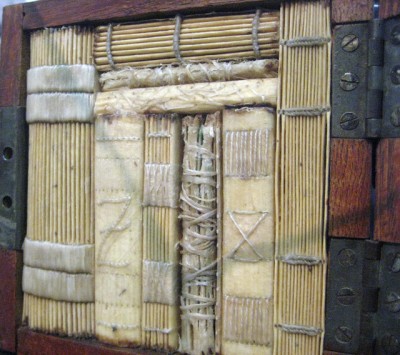 I was so pleased to see the work of Jody Alexander at the front of the exhibit. One of my first teachers, her intricate bindings have found the place they were meant to be here in a sort of specimen case with the spectacular title If She Thought It Would Help, Zelda Would Use Her Antediluvian Curse Cache to Attain Her Revenge.

One amazing book that I couldn’t photograph was by Thomas Parker Williams and called Fire Book. We were asked not to touch or turn the pages during the opening reception but perhaps it is a little more accessible during a regular gallery visit. In the meantime, take a look at the link above for some great photos of the work. 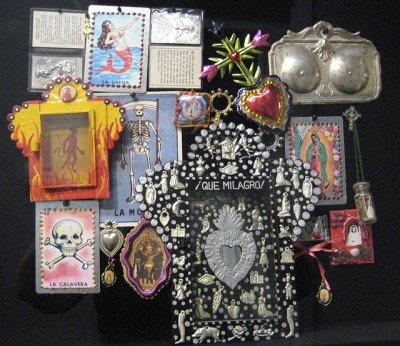 Around the corner from the main exhibit room are these three wonderful cases of occult and esoteric ephermera. The first case was full of magical objects reflecting the unique flavor created by melding Roman Catholicism with Mexican folk beliefs. The milagro charms used to pray for ailing parts of the body, the nichos boxing in the religious and personal mementos, the loteria cards with their iconic images . . . there is possibly no other place in this country where such a variety of colorful talismans of a religio-magical nature can be found than in the American Southwest. 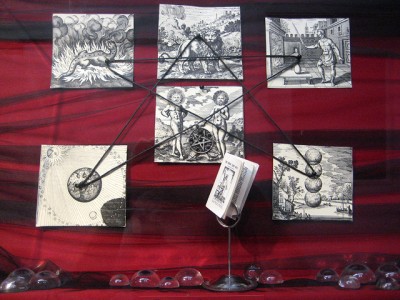 The next case featured a pentagram shape created by black cord connecting historical alchemical images from early printed books, including the marriage of the Sun and Moon, bottom center. The LWB (little white book) from the classic Rider-Waite-Smith tarot deck is in the front. 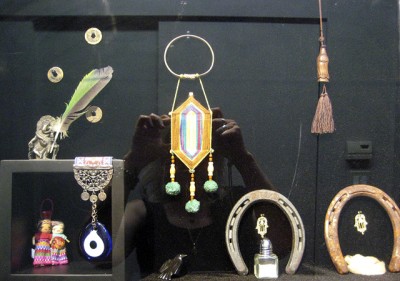 On the third of the ephemera cases is a card which says, “Superstition is in the eye of the beholder.” One person’s superstition might be another’s religion. Most of these objects, though curious and strange to some of us, are actually religious objects to the people who made them. Thus we have a Zuni bird fetish, a Hindu statue of the god Ganesha, a Tibetan yarn “god’s eye” (I know there must be a more proper name for this – the photographer has her head in it so it would be nice to know). The horseshoes and the shaker of salt do, I think, fall into the category of the purely superstitous, but who am I to say? 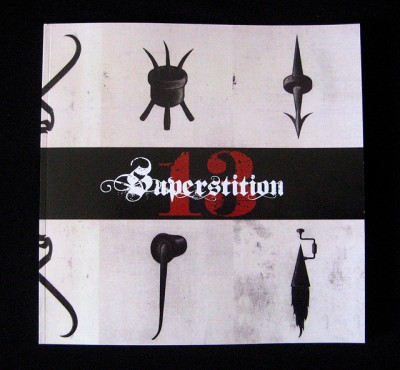 There were many other incredible pieces in this exhibit which just didn’t come out well in my photographs. I highly recommend the catalog, which has beautiful studio shots of the art, artist’s statements about the work, a fascinating bibliography, an essay on the history of alchemy. The cover art is by Sergio Serrano from his The Book of Imaginary Beings.  The book may be ordered by directly contacting San Francisco Center for the Book, and they will be happy to send you one. 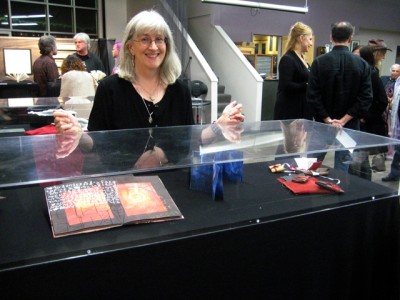 My three works all shown together is enormously pleasing to me. The Star Spell book was a exploratory work with “spelling” in 2007, before moving on to the Spelling Words series in 2008. The Five Medieval Childbirth Charms were made this year and continue my interest in spell work. If I could have cast a spell for these works it would have been for them to be in a show like this together.

The exhibit closes on Hallowe’en with a festive closing reception at which it is said there will be costumes, tarot reading, mysterious drinks from a smoking cauldron, and a dramatic reading of Edward Gorey’s Gashlycrumb Tinies alphabet complete with life-sized pages! These folks do know how to have fun with their books!