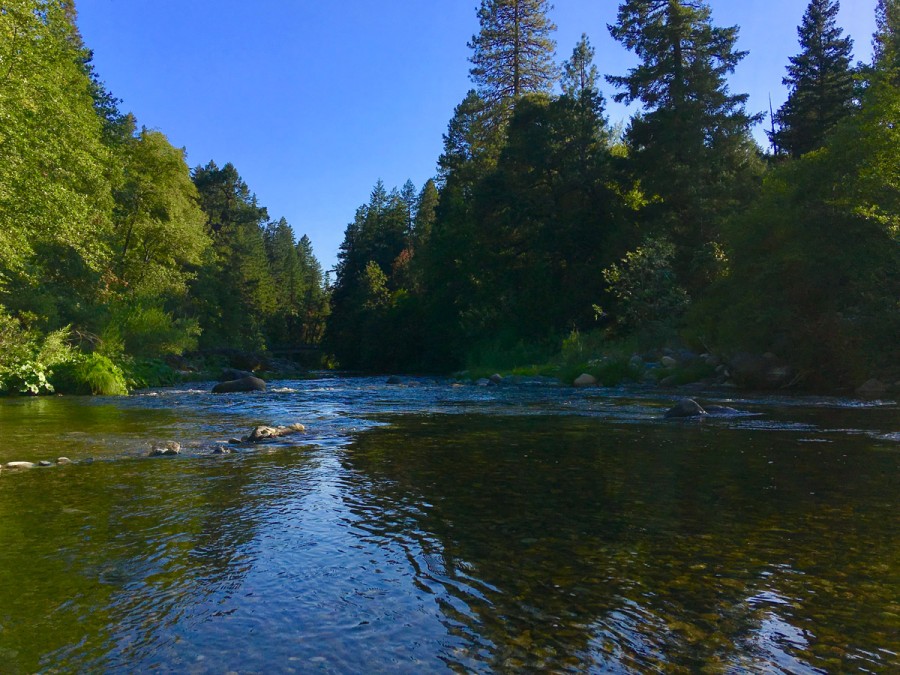 Now that we are nearly at the fall equinox, teetering on the hinge between the waning light of summer and the waxing dark time of autumn, I find myself looking back as well as forward toward Yule. My summer was sweet and productive. 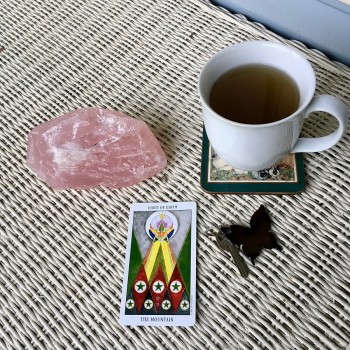 The book I’ve been working on needed to be taken into isolation to be forged into a complete first rough draft, so a dear friend offered me her vacation rental cottage in the tiny town of Dunsmuir, on the southern side of Mount Shasta. For thirteen days at the end of July, I sequestered myself in this quiet place and wrote, revised, pondered and wrote some more. It was an extraordinarily fruitful time. I was astounded at the spaciousness of thought that eventually settled over me. I was not lonely, not at all, for I had my beloved dead around me, whispering in my ear during the ambrosial hours when sleep eluded me. I sat wrapped in a blanket in the old plaid rocker and let my sleepy mind drift. I am writing an old family story. So the presence of my grandmothers, known and unknown to me, was welcome. There is much in the story that must be intuited and dreamed. They have offered their aid in this way since the very beginning. I also had my talismans and tarot deck with me. Tarot speaks to my storytelling mind, and the lovely rose quartz is a healer of the heart, carrier of feminine energy and opener of ancestral love and compassion. I drank at least a quart or two of green tea every day. 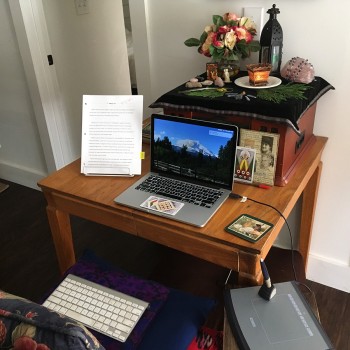 The altar was the first thing I made upon arrival, adding to it almost daily with new treasures and continuing devotion. If I even stepped outside for a rest or a session of my daily qigong, I extinguished the candle, ever mindful of the fire danger in northern California, especially after the last two years. And with Pacific Gas and Electric’s warning that rolling blackouts might happen to avoid fire danger, I had a power pack along with me so that I could keep working if the lights went out. Luckily I never needed it! I came ready to work and I did.

I had printed out the pages of the manuscript before I left, and began by reading the entire mess of it straight through for the first time, with a red pen in my hand. This is an old way of doing it. Writers didn’t used to have the luxury of printed pages to work from unless they typed them out themselves, or had the help of a spouse or secretary to do it for them. A laborious task to be sure. Before that, books were written entirely by hand. Think of it for a minute.  Somewhere I saw a vintage photograph of a writer sitting next to two stacks of her manuscript, taller than her. So I am grateful every day that I have a tool that lets me copy and paste paragraphs and pages with an ease that would shock my writing ancestors. Above is a photo of one of my writing stations, with my laptop, the ever handy wireless keyboard and my old Wacom stylus. The tarot card on the keyboard was there to remind me not to use the trackpad. Even with alternating this station with a more comfortable one on the couch, thus changing up the angle of my arms and wrist, I was visited by the claw of doom at the end of every day. A liberal application of cottonwood bud salve and a walk went a long way to repairing the damage and by the next morning I was ready to go again. 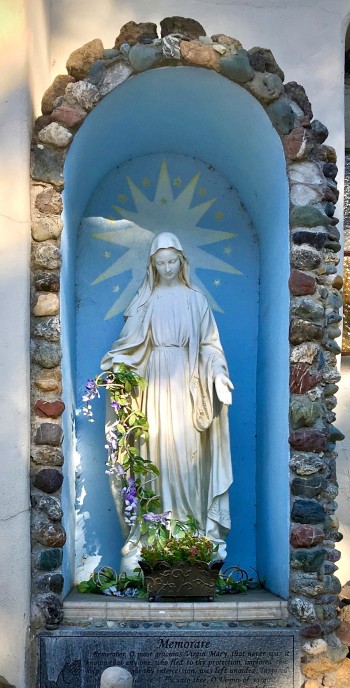 I also wrestled with my demons of insecurity. As always happens when I carve out retreat time for art or spirit, there comes a day when I “hit the wall.” Without the daily distractions of ordinary life, the enormity of the creative process creeps up on me until I reach a point of “can’t.” It doesn’t seem to matter whether I am in a workshop with other artists or entirely by myself. I can count on it, and every time it happens, I momentarily forget that it has happened before, will always happen, and that nine times out of ten, it has arrived to foretell some new revelation or breakthrough. This time, an angel in my very small online writing group asked if she could call me. Thank goodness for modern telephone rates and magic ways of calling that probably use wi-fi (which I did have). After two hours listening to wisdom from the wilds of west Ireland, I was back on track and had even received the germ of an idea for a title.

Every morning, and many evenings, I visited this Lady. She offered her blessings from a niche on the outside of a Catholic church, surrounded by sweet mountain water singing over the stones and offering refreshment for this weary writer’s soul. Underneath her were inscribeded the words of the Memorare prayer, a plea to Our Mother to remember us. I soon committed the words to memory, changing, as I often do, the prayer to be a better fit for me. My journey with this is really another story, but suffice to say that being able to sit with the goddess of my grandmothers informed my work in a sweet way and helped me focus on what I was really trying to do with this endeavor. The one time I ventured into the actual church, I did not find what I was looking for, but at the feet of this lovely lady, I did. I visited her most often at sunrise, when the light streamed from her brow, and at sunset when my work was done. 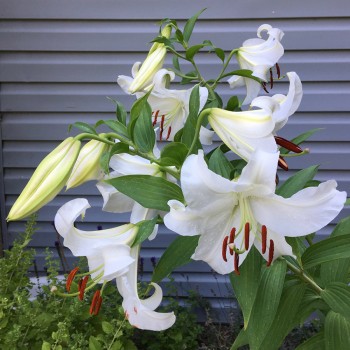 When I did venture outside in the heat of the day, there was plenty of soul food for the senses. In the front yard, a breathtakingly beautiful lily opened up. The rose and the lily are the two flowers most associated with Our Lady. The scent was rapturous and the blooms abundant. In the back I gathered fronds of western red cedar, a medicine tree that has served as a sovereign remedy for me for many years. I collected baskets full of it to bring home, reveling in the clean scent of this tree that grows only in Cascadia – the Pacific Northwest which extends into northern California only about as far as the Shasta latitude. I spent much of August making tincture and oil from it, as well as catching up with myriad other things, including this blog, that went by the wayside while I immersed myself in the book. 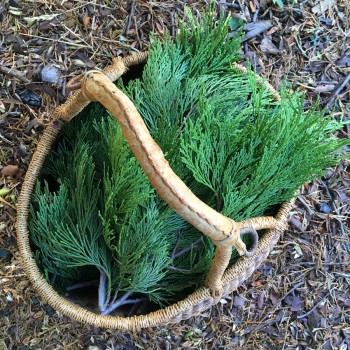 Finally, I had to say it was as finished as it would be at that point, and sent it off to my editor on August first, a very satisfactory way to mark the first harvest festival of Lammas. I was lucky to find her, and luckier still that she agreed to help me, and it is money very well spent. After a hundred thousand words, there is some coherence but also some confusion, so a rewrite is in my future. I knew this would come. For the last few years the important thing has just been to get it all down. Now I can begin rearranging, cutting, and rethinking. I may need to retreat again.

After that I went to see my friend, who was opening up her family’s summer cottage down the road. We took ourselves down to the Sacramento River as the sun was going down. I was minded of the Spanish meaning of that name: Most Holy Sacrament. Putting my feet into the icy water of this crystal clean river was a benediction, for I have often thought of my female lineage as a river. The swift current carried my doubts away and I felt cleansed and invigorated. To have got this unwieldy project to this point has been grueling work, and also transcendently joyful. In every way, I feel blessed to be able to write it. As I drove back to my sanctuary for my last night, the great Mother Mountain loomed up ahead of me as I drove up Interstate 5, her white flanks shining in the almost-dark. I remembered what the mountain whispered to me when I was last here: Tell the story in your own voice. And that will be the way forward through the rewrite. 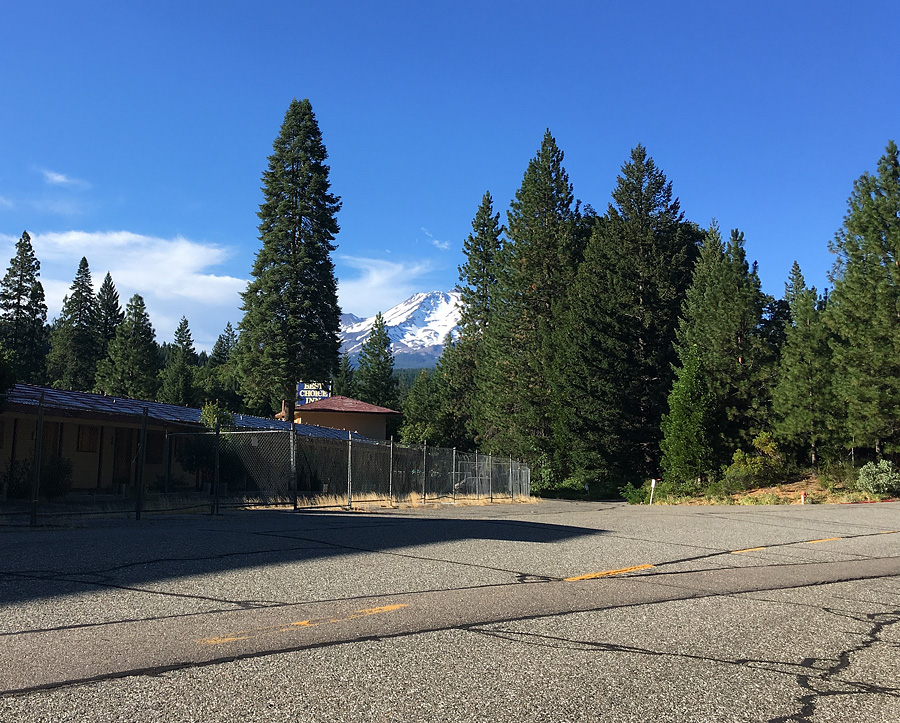 Today is the anniversary of my mother’s death, many, many years ago, when I was not yet forty. She is always near me, for it was she who gave me the bones of this story when I was still a teenager. I can think of no better way to honor her memory than to keep going. 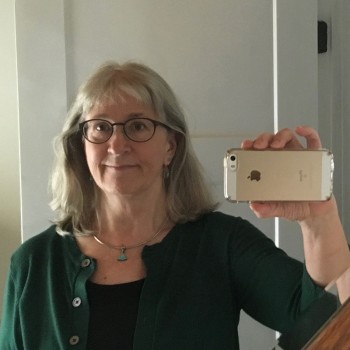 If you have gotten this far, thank you for reading. As a kind of postscript, I will admit to feeling a bit stir crazy in that cottage with my commitment staring me in the face and a deadline to meet, and so one day I played with my phone and took a few selfies. Maybe I just wanted to remember what a writer looks like who is finally, after too many years, living her dream of writing.