Spelling Words is Sacred *and* Profane 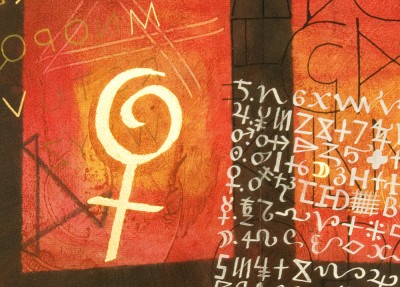 I am so very pleased that my gilded Spelling Words book is currently on exhibit in 23 Sandy Gallery’s show “Sacred|Profane”  in Portland, Oregon.

From juror Jim Carmin’s statement: “In the beginning books were saturated in the divine. The words they contained brought forth the word of God and in early times few objects could possibly be more sacred. Yet humans are intellectual creatures and with their inherent curiosity along with perceived injustices in the politics and policies of the church, questions were raised and expressed, and later put into books. Thus the concept of sacred and profane has been with us for almost as long as books have been produced.”

When I heard the theme of this show, I guessed that my book would be a good fit. My desire to make books of devotion was expressed by exploring the ordinary alongside the extraordinary, in the origins and contemporary uses of the word “spell.” 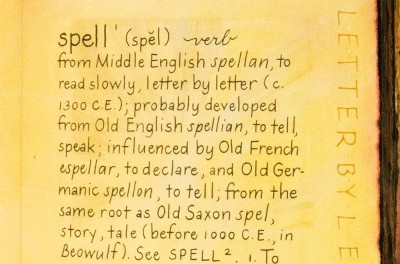 “Sacred” can mean that which is holy, revered and or set apart from the mundane. Its root meaning is the Latin word sacrum, which has another meaning as that part of the human body which contains the generative organs.  Sacred can also mean spiritual, divine, or numinous.

Conversely, “profane” can simply mean secular, not religious. It can also mean irreverent. It can even go so far as to mean blasphemous, or vulgar or sinful. I know that by some people’s belief systems both of the images I show here might be considered profane. I chose them because the dictionary page represents the ordinary, secular side of the book, and the magical alphabet the sacred.

To me, each is both sacred *and* profane. The etymology of the word “spell” points to its use in the telling of sacred stories, hence its appearance in Beowulf, and its later use by Spenser in the word “gospel,” meaning God’s spell. In the page of the “magical” alphabet, the lines each begin with symbols representing the planets as they were understood in the 17th century. The large gilded Venus glyph also symbolizes woman, seeking to reclaim the divine feminine, so long discarded by the Abrahamic religions who define God as male. It overlays the symbol for triple alpha, a charm that was often used for women during childbirth, arguably a sacred time in a woman’s life. And finally, the divine nature of our letters, used to make words, is also shown. Words that are spoken, sung, chanted, or written are very often the vehicle for expression of the sacred in people’s lives.

I have written more extensively about the genesis of this book here, and here, and on the book’s gallery page. 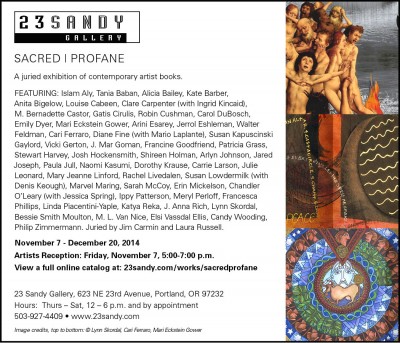