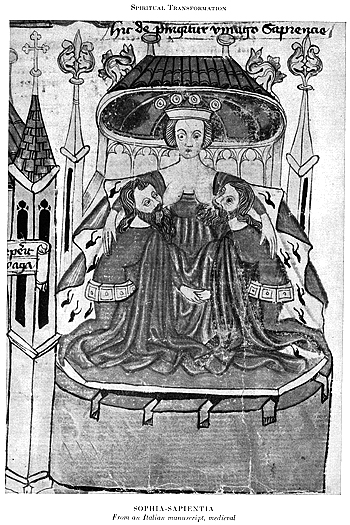 Juno’s Moonday School jumps to medieval times with this extraordinary image from an Italian manuscript, depicting the bearded church fathers suckling at the breasts of Sophia, or Sapienta, as she was known in Latin. Sapienta can be seen in a gothic hand above the massive crown or dome on her head.

I’ve written about modern illuminations of Sophia in the Saint John’s Bible recently at Goddess in the Bible. In further research for a reprint of this article in an upcoming issue of Alphabet, I found this amazing image. I imagine it’s from an alchemical text, because I can’t imagine this appearing in a bible, but things were mixed up during medieval times, and the old ways were everywhere, particularly in the marginalia of the Christian texts. This looks quite a bit bigger however so it could have been a full page illumination. Perhaps a medievalist will be able to offer the manuscript source for this image.

Body wisdom: nourish mankind with women’s milk of knowledge, a kind of knowledge that only comes from living in a woman’s body and being initiated into women’s mysteries with the first menses, a process that continues through the birth and blood mysteries of a woman’s life.

Though even mother’s milk was “formulated” in this past century, scientists are finding out interesting facts about breast milk being able to “kill” 37 kinds of cancer, or some such. But we are all blood and fluid, and all were nourished in our mother’s bodies and suckled at her breasts.

A lot of men aren’t particularly attracted to “goddess wisdom” but perhaps I’ve snagged their interest with my title. It’s actually a bit redundant, since Sophia is the Greek word for Wisdom. One of the greatest religious cathedrals is Hagia Sophia in Byzantium/ Constantinopole/Istanbul, famous for its amazing huge dome. And writing “breasts” will probably get me on someone’s list of objectionable content.

This one’s for my circle sister Suzanne, who’s invoking Sophia tonight for her circle tonight in Berkeley.