She is Not Submissive

This proud female is called “Goddess: Terra cottta, Phoenician, c. 2500 B.C.” in The Great Mother. This puts her at least a thousand years previous to the writing of the oldest Hebrew testaments, but in the same geographical area, ancient Canaan. Her posture is not submissive, and her emphasized pubic triangle and other markings identify her as a priestess or an early manifestation of Goddess from Bronze Age agrarian cultures that preceded the Iron Age patriarchs.

This was the text about her that I added to the additional material I provided for Alphabet‘s reprint of my “Goddess in the Bible” blog post, which has just been published in the Summer 2009 issue. The editor juxtaposed this image with the larger photograph which shows the half-page illumination in the Saint John’s Bible Wisdom Books: “A woman who fears the lord is to be praised.” They show two very different attitudes toward women, one in an image, one in text (which is also an image, in this case, illuminated by Hazel Dolby). 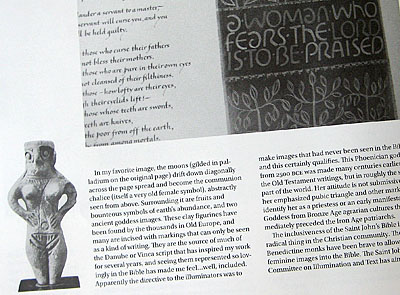 Body wisdom: Eyes are wide awake and setting boundaries; they are an organ of the wood or liver channel in qigong. Hands on waist direct energy to hips, the foundation of the body and also cradle for our organs of generation. And stand straight and proud!