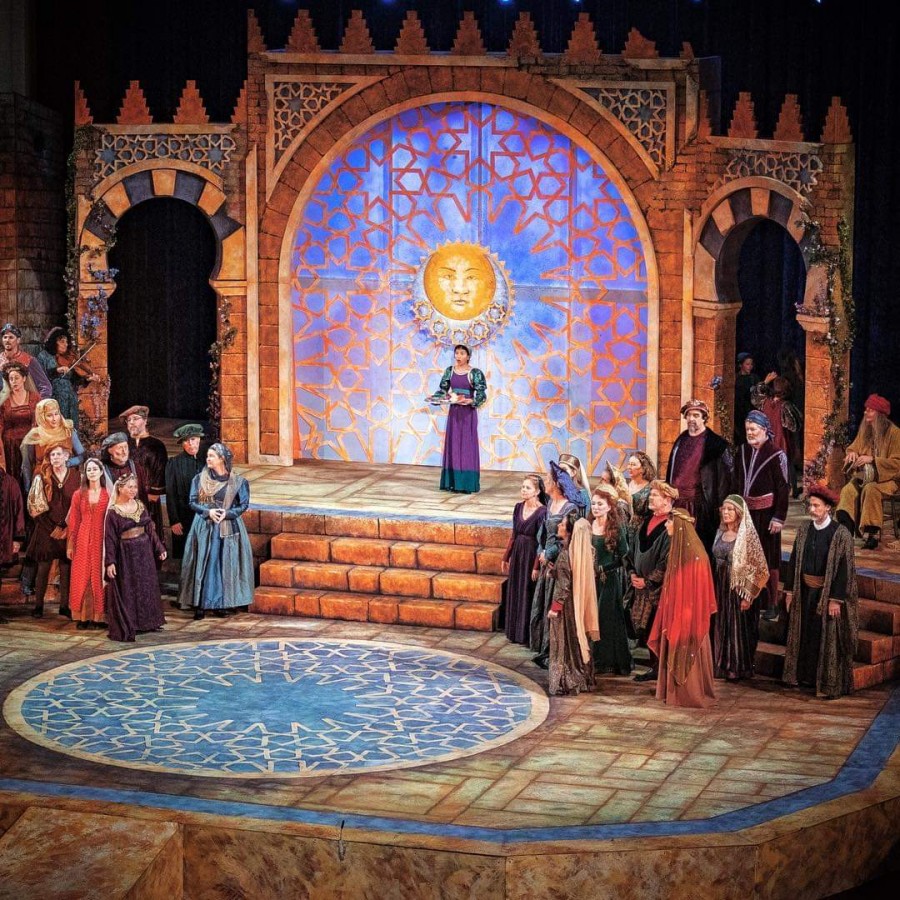 We sit in the darkening theater as the house lights go down. We have applauded the opening remarks of the artistic director and sit expectantly before the shadowy, exquisite stage, awaiting this year’s magic. As the audience quiets down, the clapping continues, and it is with a little thrill we realize the chorus is assembling on the stage, silhouetted in the half-light, clapping out the beautiful and strange rhythms of the time and place we are about to enter.

We have been transported to medieval Andalusia on the southern Iberian Peninsula, to a mythical time with roots in recorded history, a time called Convivencia, which means co-existence. For a few hundred years, the governance of Andalusia by the Moorish caliphates was characterized by a notable tolerance. The population, made up of Muslims, Jews and Christians, along with Phoenicians, Greeks and many others, created a flowering of poetry, music, architecture, art, dance, mathematics and astronomy. The Muslim rulers called the Christians and Jews the “People of the Book,” who like themselves traced their religion back to the Biblical Abraham. For many centuries, until 1492, when the ascendant Christians expelled the Jews and Muslims from Spain, these three cultures lived harmoniously together. What might be thought of as a golden age was not immune to conflict, but overall everyone lived together in a kind of harmony and  religious liberty.

Was it a myth? Was it real? We can’t completely know, but the music, dance and other cultural artifacts that have come down to us from that time are extraordinarily rich and diverse. At this Andalusian Christmas Revels, we are awash in a sea of beautiful poetry, a dramatic performance that is music rich and dance dense. The story surfaces just often enough to remind us of its relevance to our modern times. 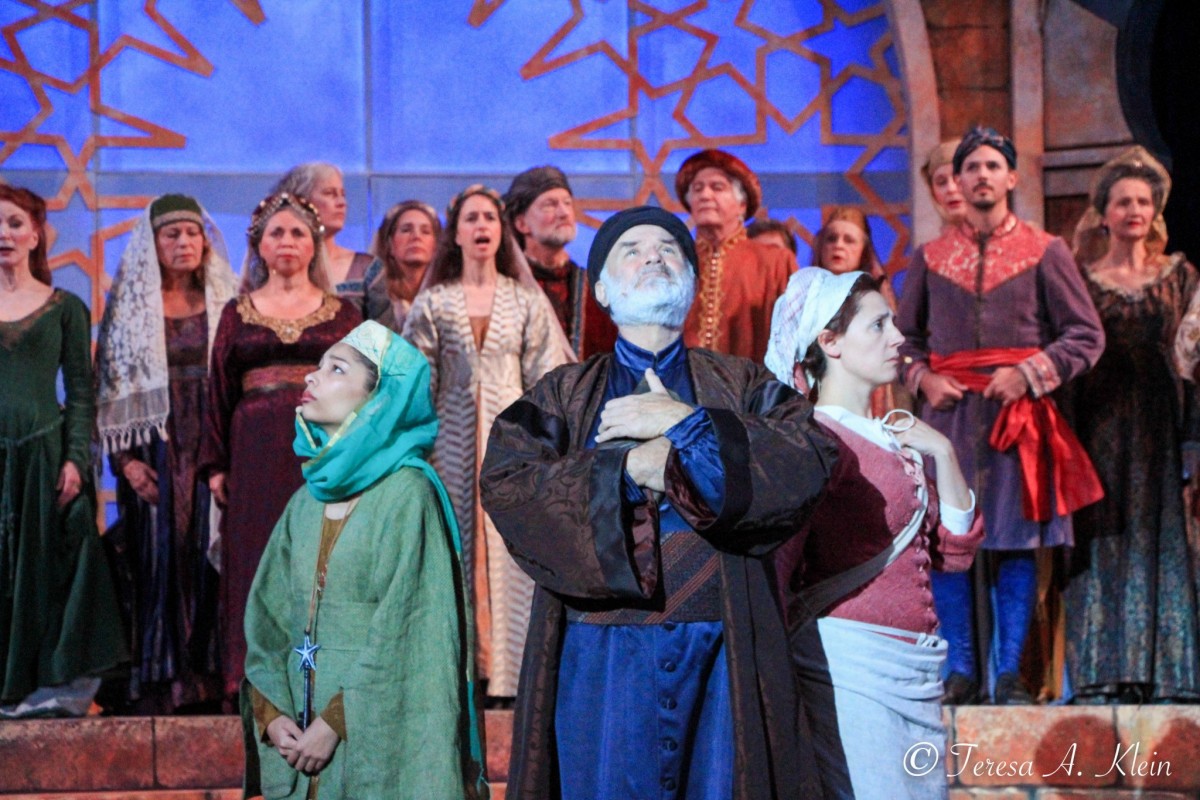 The three principal characters are Constanza (Rebecca Pingree), a scrappy Castilian scullery maid who dreams of faraway places and sets out on a journey, where she meets Najma (Milan Whitfield), a graceful Moorish woman who has inherited knowledge of  the natural world’s patterns and the movements of the stars. They are joined by Zevulun (Robert Sicular), a wandering Sephardic Jew, who carries with him a book full of poetry and philosophy, and who believes “language is a window, not a wall.” 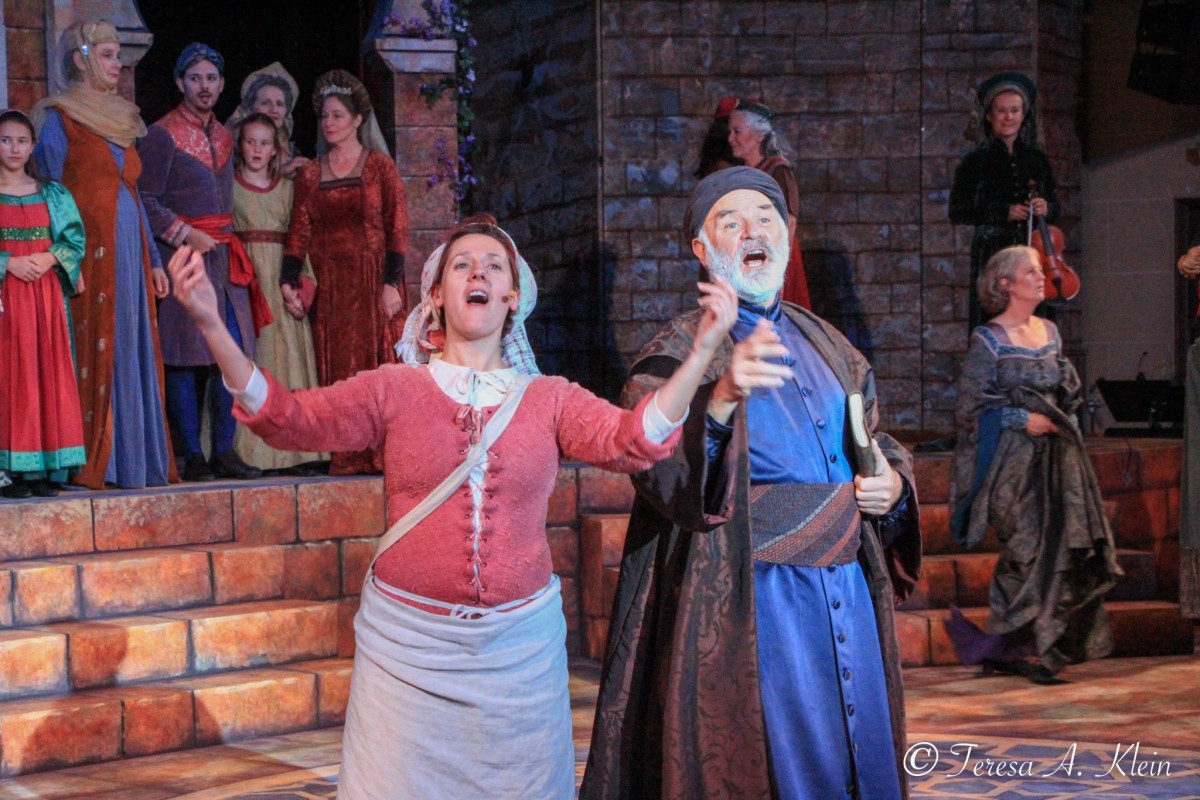 They are seeking a long ago place where they may all live in peace together. Constanza says, “Convivencia! I love the word very much! To live together; to share the woods and fields, the islands and the oceans. Why can we not do this? After all, the land does not care who turns the soil. The river does not care who rows the boat. It is people who make the borders and it is people who decide who is worthy and who is not.  And in what place is this different? Where is the land of celebration where all are seen as equal? How do we find it?” 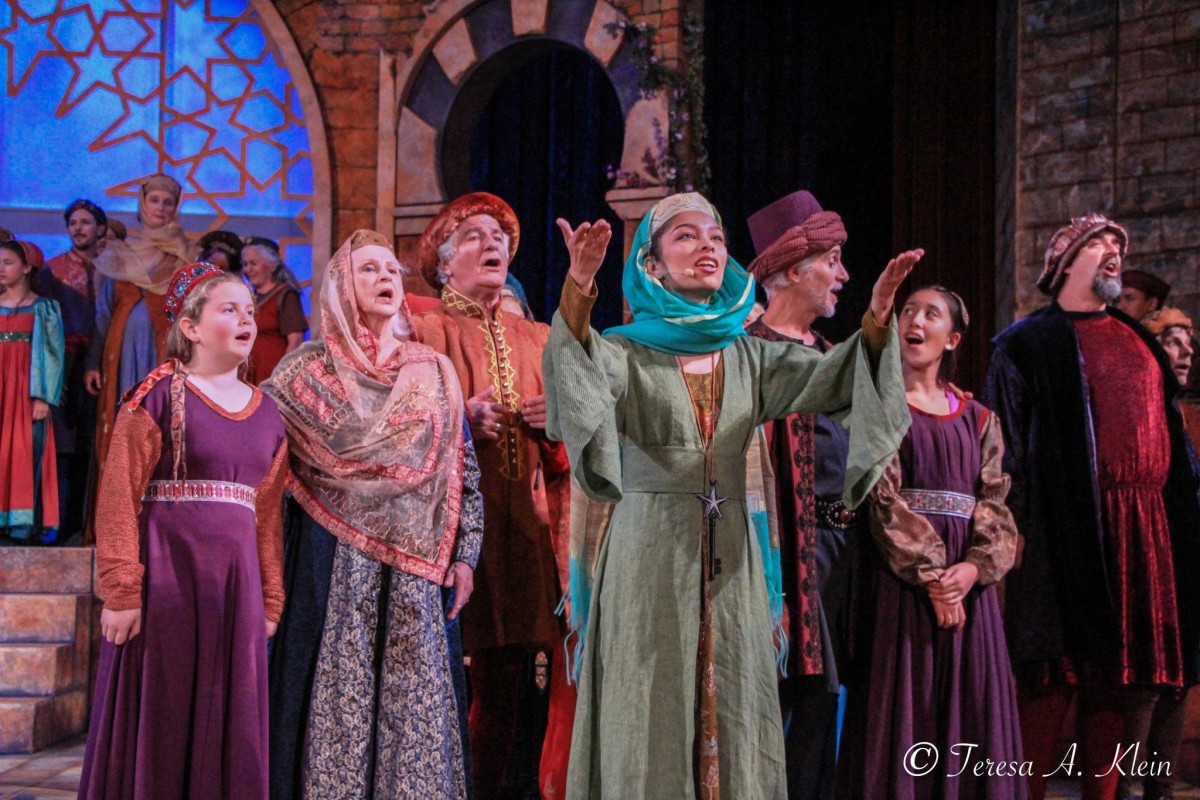 They seek for it among the people of all three cultures whose ways are shared by all peoples everywhere, the warp and weft of daily life expressed in song, food, games, mystery and ritual. The music is a sensual delight of unusual and alluring rhythms, and although mostly not in English, it doesn’t matter. The texture of the songs is complex and delicious, some in a different modality from what we are used to, some using different scales. There are Arabic love songs, Hebrew Chanukah songs, songs of eggplant and hymns to livestock.

The chorus presents all of these varied songs with confidence and flair, moving easily between sacred and secular music of the time, singing in Latin, Arabic, Hebrew, English and Ladino, a hybrid Judeo-Spanish tongue of the time. They are accompanied by the stellar musicians who create wonderful sound with fiddle, recorder, brass, percussion, mandolin, oud and darbuka, viola de gamba and vielle. 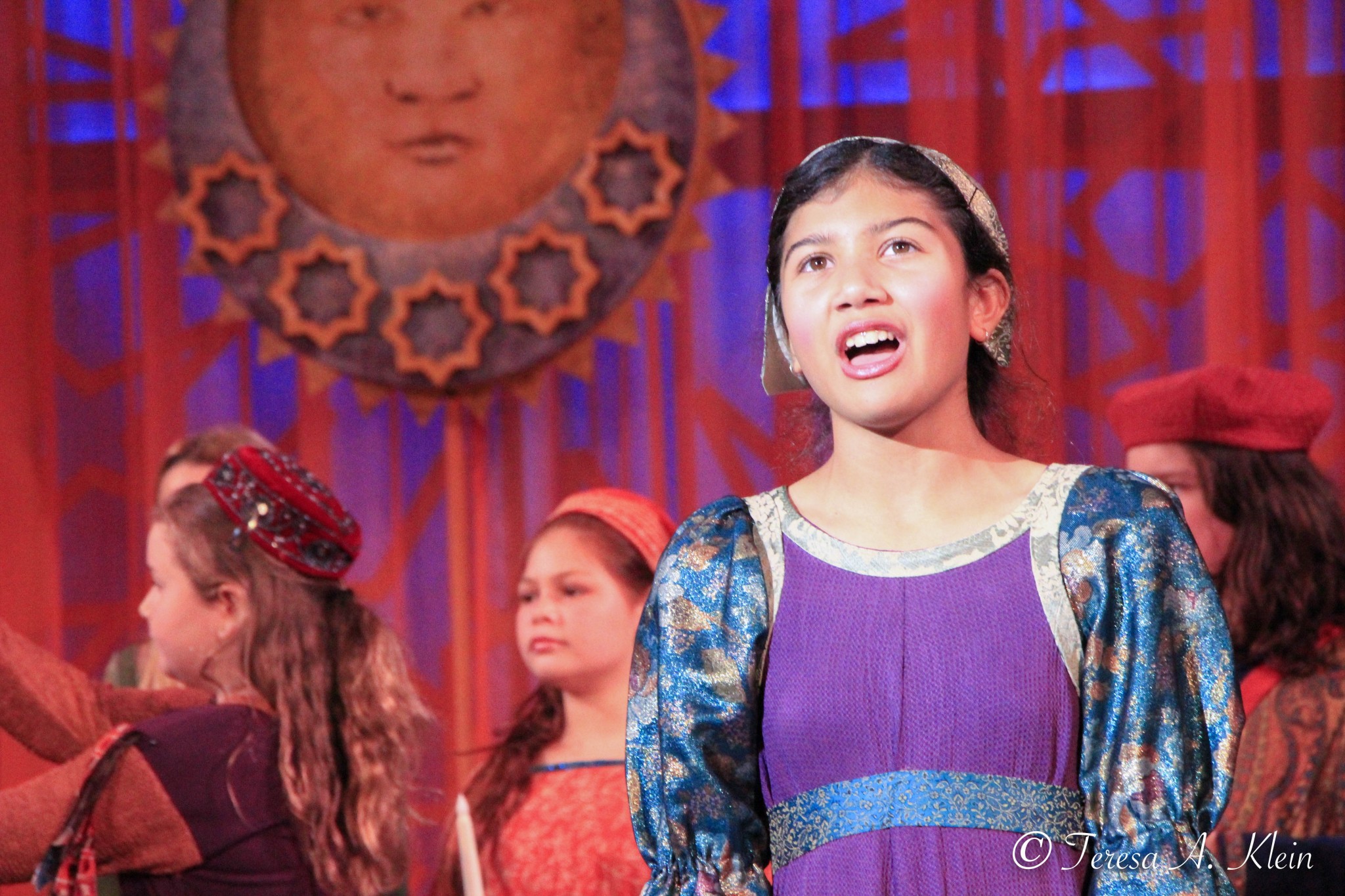 The beautiful sword dance is called al-Sa’id, and is a fierce, sinuous spectacle, mock martial cries punctuating the intricate movements of the young dancers. 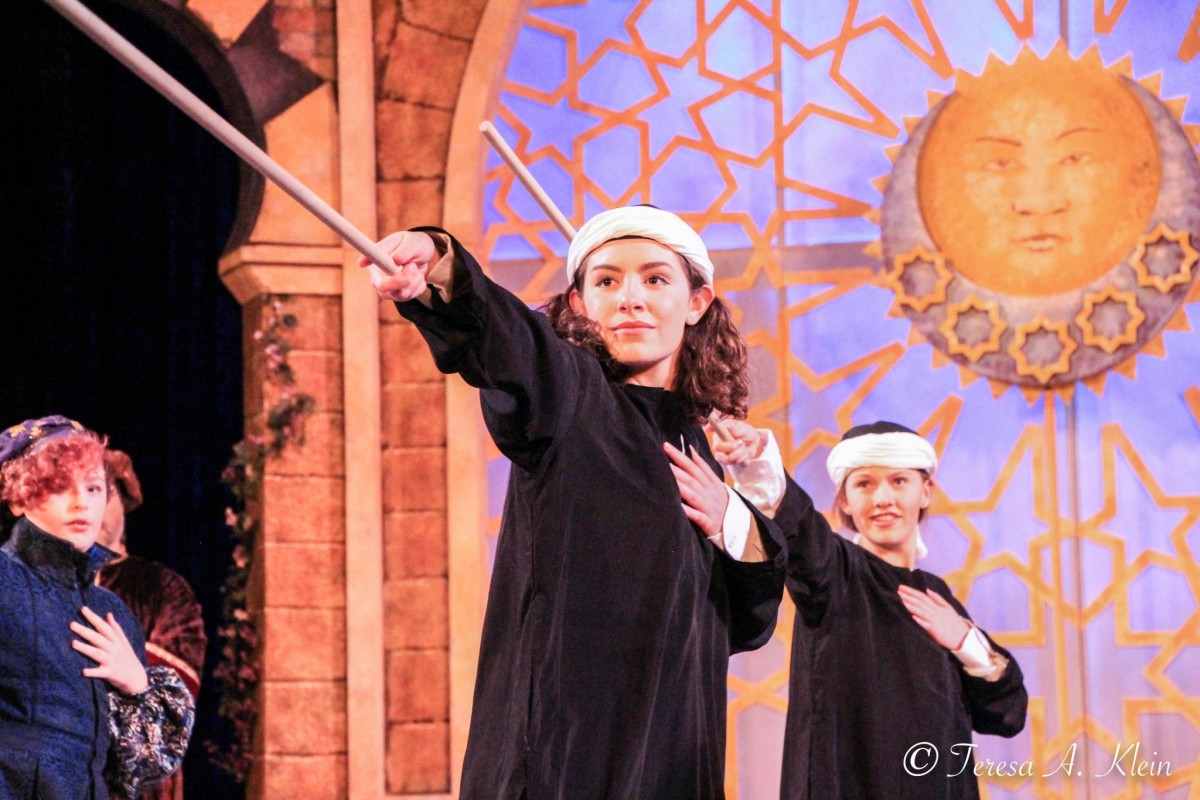 The sumptuous set design evokes the intricate line and pattern of Islamic palaces, and the lighting of the set produces a mystical feeling of a faraway land. 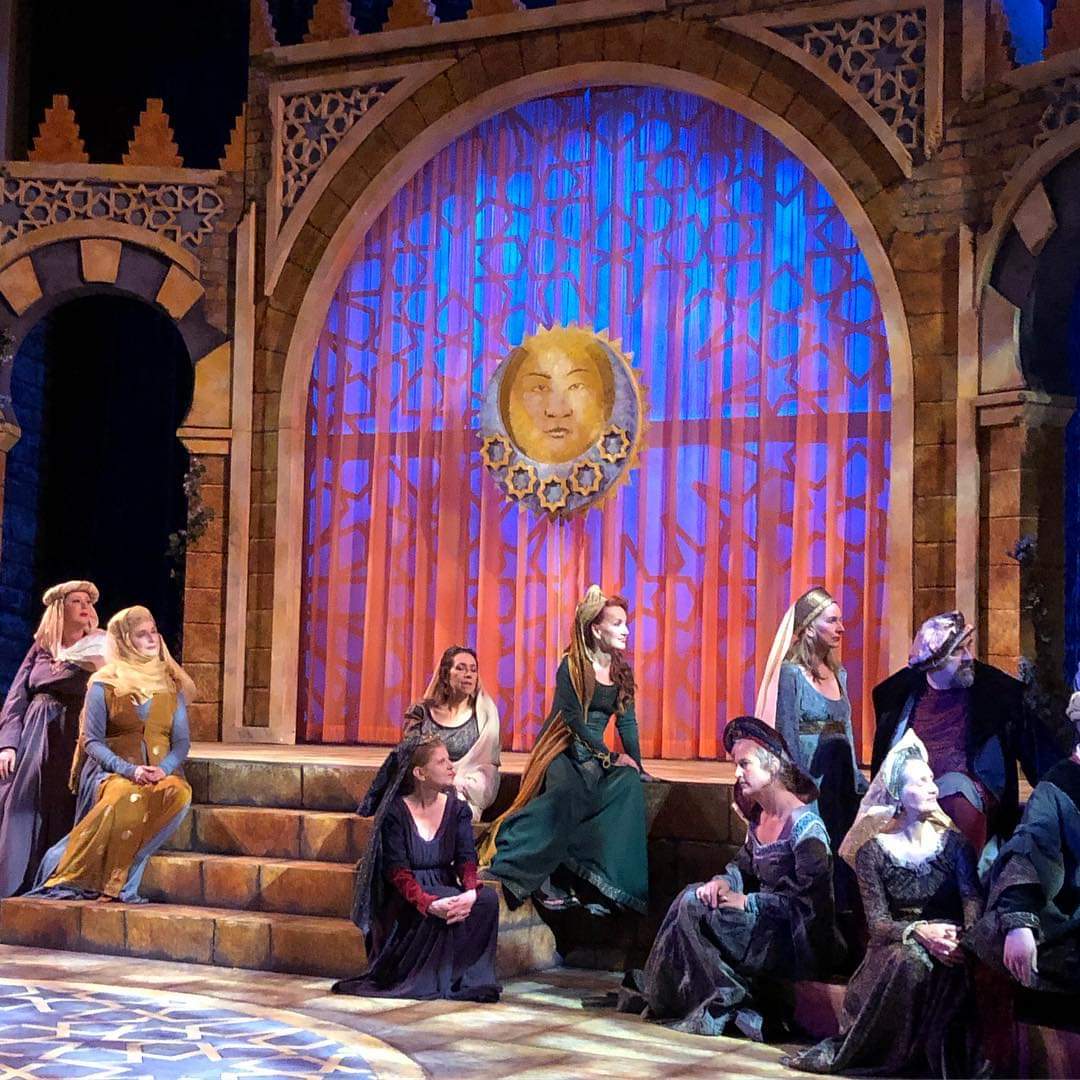 The costumes are a mix of styles borrowed and melded into an exotic blend of drape and veil. The chorus and dancers do not differentiate by cultural costume, which emphasizes the fertile sharing between peoples. 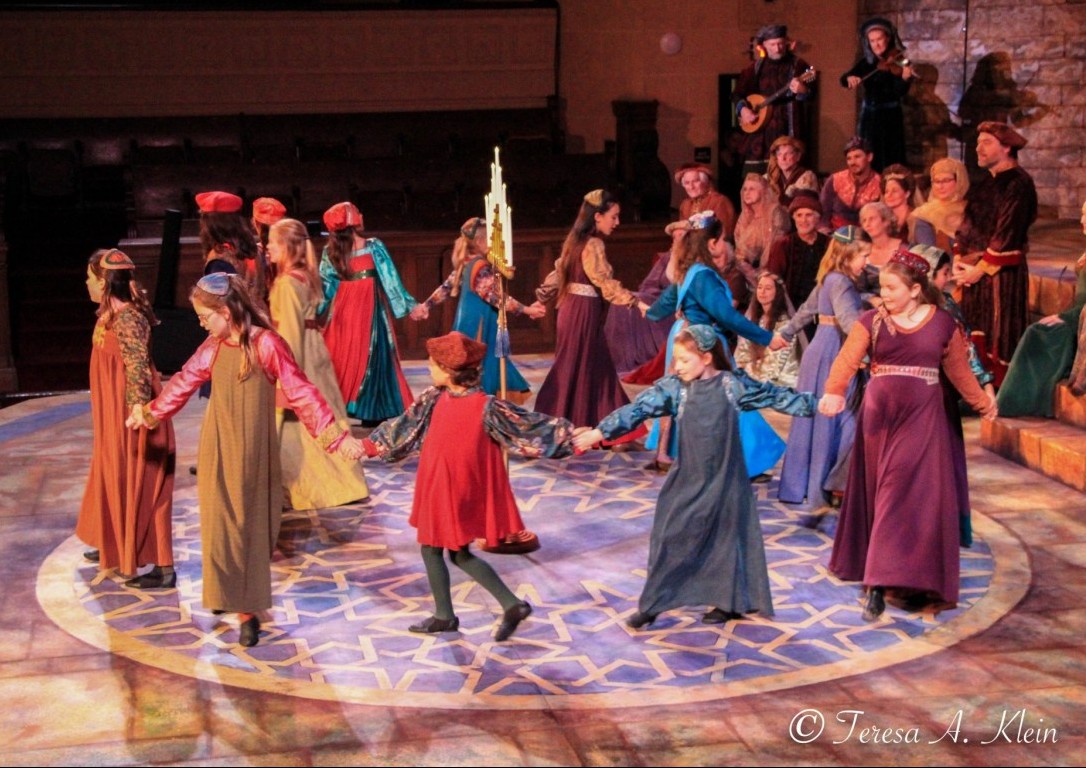 At the end of the first act, the mood of the story turns dark with the arrival of the Danza de la Muerte. Ten twitching, reaching, threatening Esqueletos (skeletons), carrying halberds, spears, swords, and hatchets commandeer the stage, then advance on the assembly, until they have divided them from one another. It is an old winter solstice theme that the sun is stolen from the sky, an echo of what our long-ago ancestors perhaps wondered when the nights became so long and cold. Sure enough, these terrifying figures steal the celestial orbs from the heavens, all the while singing a kind of dirge full of gloom and doom and foreboding. 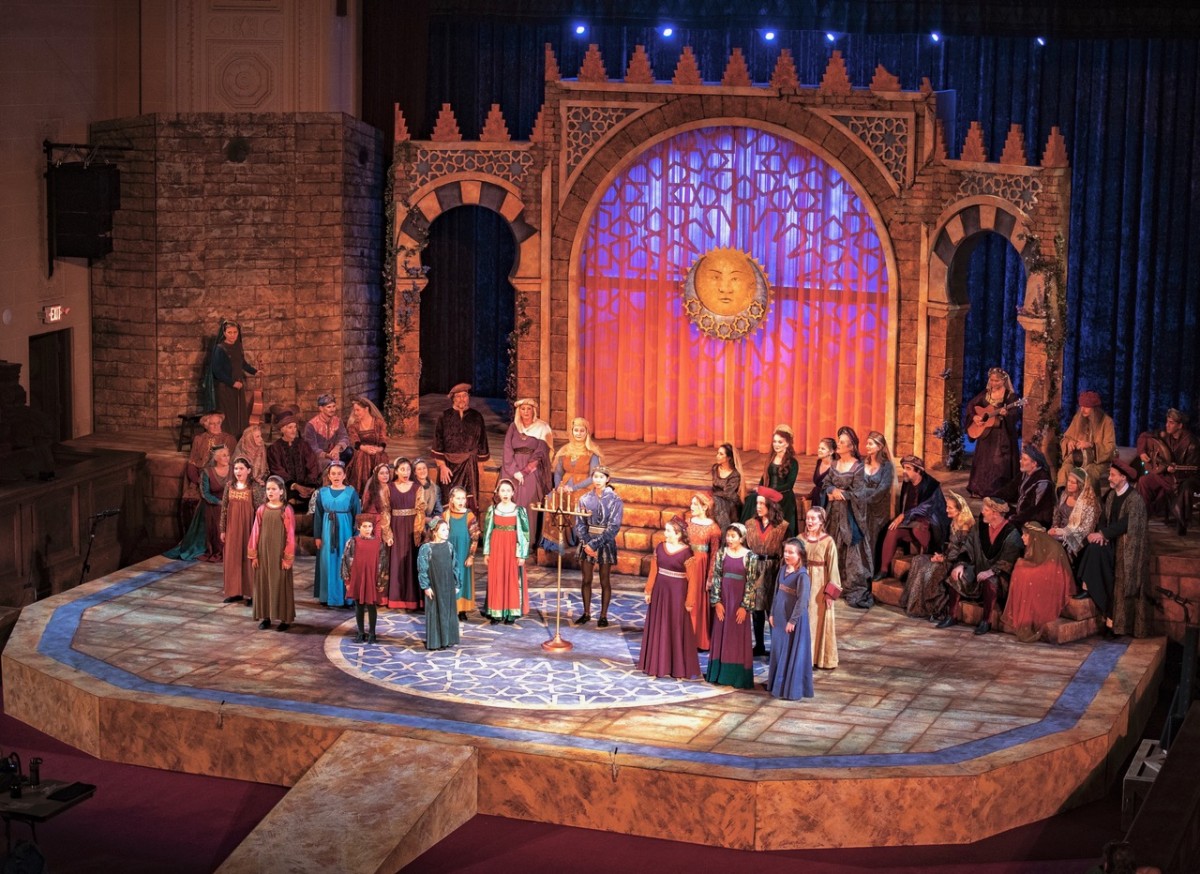 But hope returns, as it so often does, in the darkest night and on the wings of beauty. Zevulun recites a poignant poem by Yehudah Halevi, an Andalusian Jewish poet of the 12th century: “‘Tis a fearful thing to love what death can touch.” Further enchantment arrives with Sufi dancers, as four young performers enact the mystical meditation, whirling the “music of the spheres” in their white gowns and tall hats. The poem that is sung while the dervishes dance their magic is by Ibn Arabi, 13th century Sufi poet and mystic of Andalusia:

O Marvel! A garden amidst the flames.
My heart has become capable of every form:
It is a pasture for gazelles and
a convent for Christian monks, and
a temple for idols and
the pilgrim’s Kaa’ba, and
the tables of the Torah and
the book of the Quran.
I follow the religion of Love:
Whatever way Love’s camels take,
That is my religion and my faith.

The three seekers dream and wake and wander, and soon conclude, “Convivencia is not to be found. It is to be made. Let us now weave on the loom of our voices, braiding together in three parts, the song of Convivencia.” The heavens ring again with music and  harmony, and eventually the company has a confrontation with the articulated, if not articulate, Dragon of Discord, in a twist on the traditional mummer’s play. 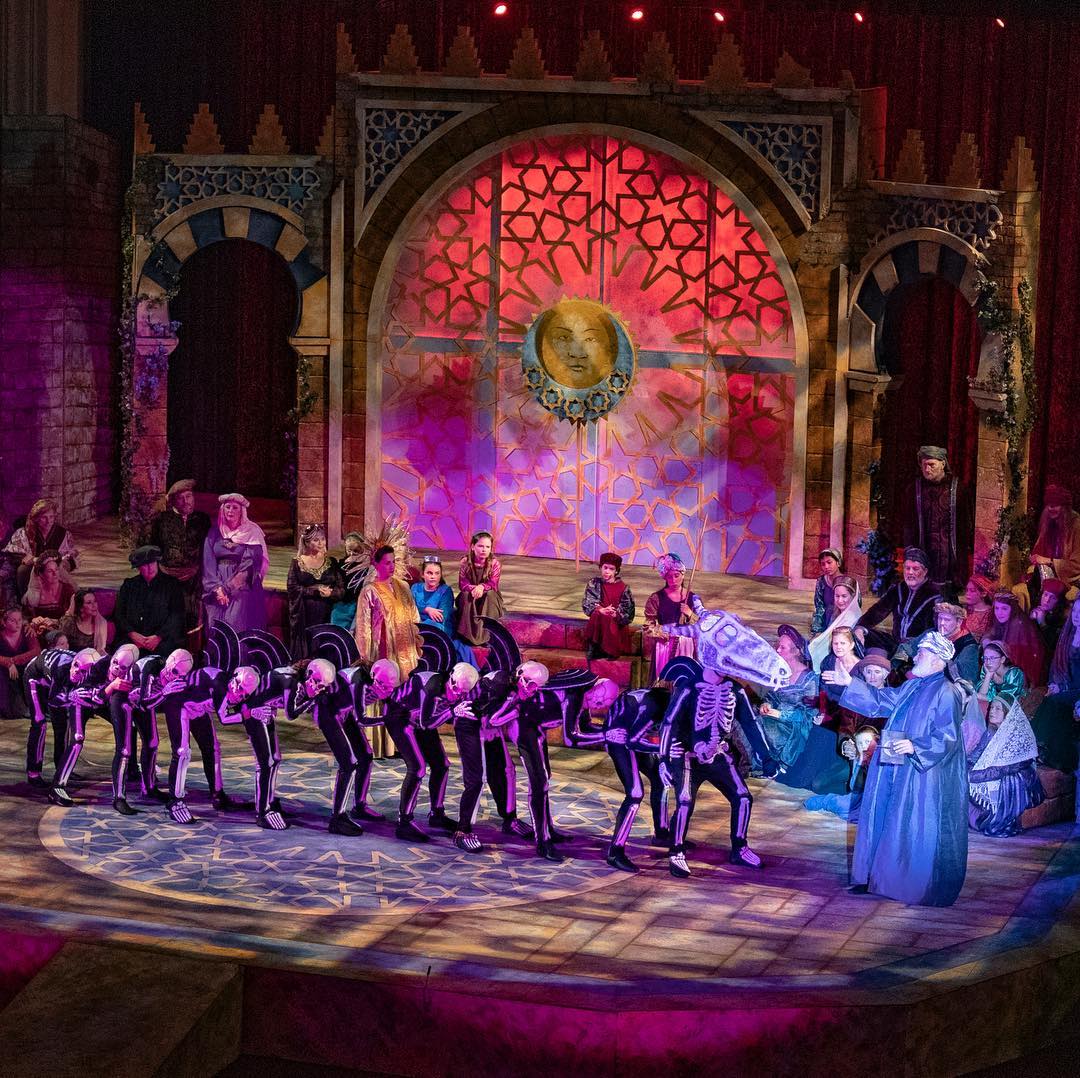 Many among us feel that we live in dark and troubled times, when events seem beyond our control or even our understanding. Everyone feels the same anguish when the figures of Death break into the merriment and wreak division among us. As Constanza says during their wandering in the dark, “How greatly I feel my fear.”

It would seem that the best medicine for fear is love. To see and hear the music and celebrations that cross the boundaries between cultures is the unique gift of Revels, and to share that experience in a great hall with hundreds of people is to experience that much-needed understanding and connection. If we lead with love, we will bring back the light.

Thanks to all the marvelous directors,designers, artists, and writers who make Revels such an extraordinary treat!

There are five more performances of “Ancient Mysteries of Andalusian Spain,” this coming weekend, December 14, 15 and 16, at the Scottish Rite Center on Lake Merritt in Oakland. Tickets and more information are at this link.

All photos by Teresa A. Klein and Peter Crompton, used with permission.

Previous post: A Decade of Musing Round the Wheel