Sacred Words for a Peace Exhibit 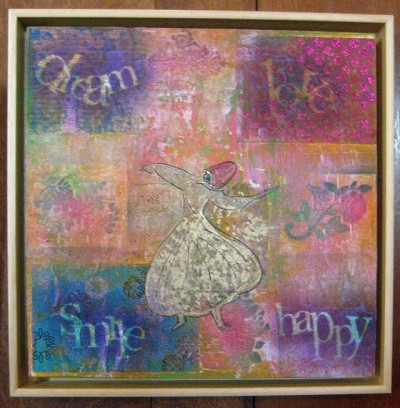 This painting, with its dervish dancer whirling amidst the words dream, love, smile and happy, evokes the spirit of the Interfaith Art Exhibit currently showing in Oakland, California. This, the second since 2011, has grown out of many years of collaboration between three worship congregations in Oakland – Muslim, Jewish and Christian – who call themselves the “Faith Trio.”  After the September 11 tragedy in 2001, a group of Muslim women from the Islamic Cultural Center of Northern California reached out to the community and found willing friends at Kehilla Synagogue and Montclair Presbyterian Church. Potlucks, study groups and friendships flourished. This year’s exhibit is filled with 130 works from members of these three groups and a fair representation of other spiritual paths and explorations by artists in the Bay Area. Here are some of the visual highlights of my visit to the show on opening night. The setting sunlight was so bright it was bouncing off everything; a very sparkly evening indeed! There were many smiles at seeing the dream for tolerance and understanding in a bright light. 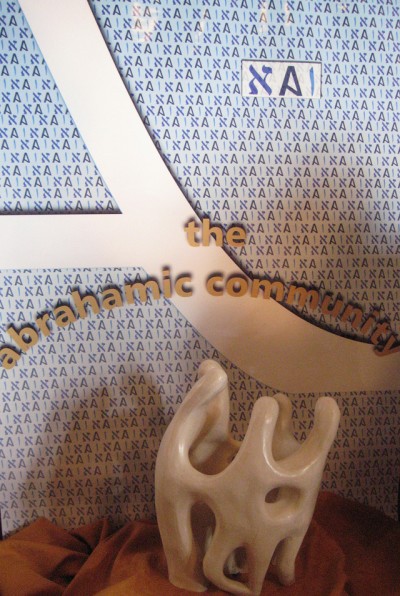 This tableau, with sculpture by Dorothea Cudaback and scroll by Jean Mudge, called “Dancing into an Interfaith Future,” illustrates the ties between the three Abrahamic religions. The letter “A” is shown in Hebrew, Greek and Arabic. The dancing circle of figures reminds me that all faith traditions have been made welcome to this exhibit. Next to it is a lovely piece of calligraphy in two languages by Zubair Simab: “Salaam” is the Arabic greeting meaning “Peace be with you.” 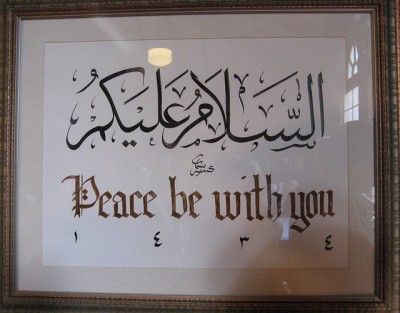 The center of the room is filled by a massive “scroll” created by Arella Barlev, with Hebrew letters cut freehand from paper and fused to a fabric backing. The text is from a famous passage known as “Lamentations” in the biblical book of Jeremiah, describing the grief at the fall of Jerusalem in 586 BCE. The artist points out that nothing has changed, and “wars continue to be waged on the backs of  women, children, and the elderly.” 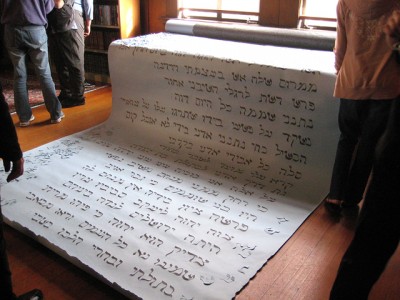 Below is a detail of the cut letters. 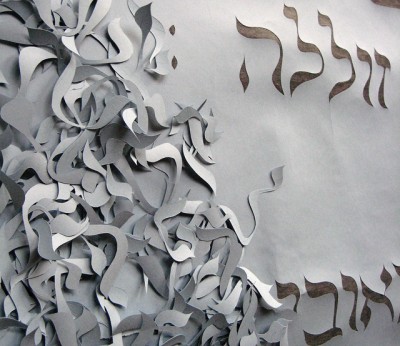 On the wall of this room is a lovely piece of silk painting by Stephanie Brown, entitled “Tallit Wisdom.” Made of sueded charmeuse, a heavy rich silk, the artist wrote on the soft fabric the words chosen by the tallit wearer, the soft fabric encompassing the wearer in the “arms of a Loving G!d.” Traditionally the words are affixed to the prayer shawl. 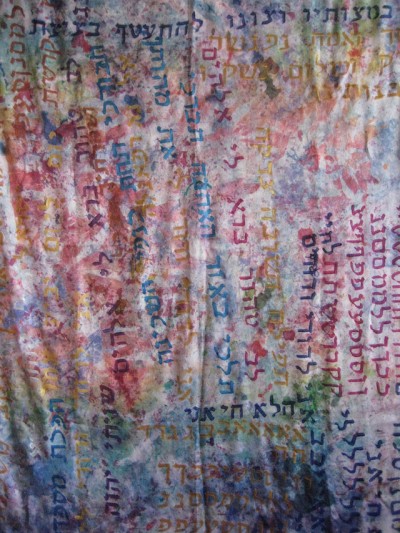 Another piece which utilizes a tallit is this show-stopper, below, “Continuity and Fracturing: In and Out of the Box,” by Elizheva Hurvich. Placed by the doorway of the room, nearly every person who went by stopped in their tracks to examine it. 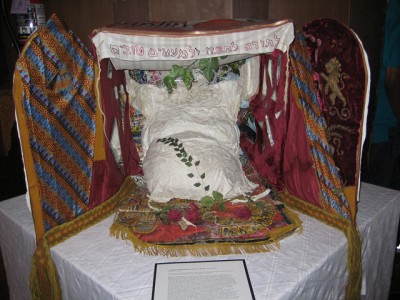 This artist took a discarded tallit, only worn by men and no longer “fit” for ritual use, and used it to cover the shape of a pregnant woman’s torso. This white form, symbolizing both a bride and women’s reproductive power, was placed in a Torah “ark”, the traditional container for the sacred scrolls of Judaism. This box is lined with velvet and shattered mirrors, expressing the “shards of brokenness in the world.” The text embroidered on the valence comes from the blessing to welcome a Jewish baby boy into the world. This complex piece excited a lot of comment. The artist herself states that making of this art felt like “a transgressive act.” 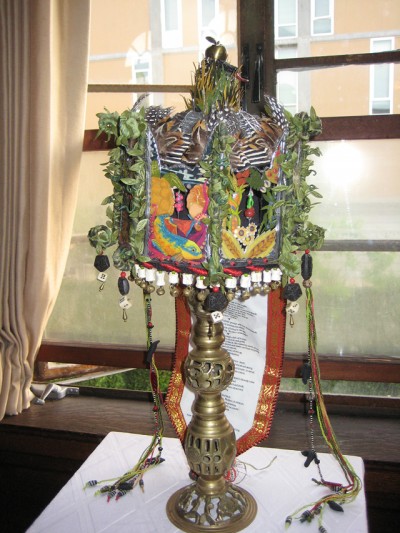 The role of women in these religions is the subject of other art in the show as well. Above, “Eve’s Crown” by Jana Rains, celebrates Eve’s “brave decision” because the artist feels  Eve “gets too much bad press.” This refers to her biblical role as the bringer of “original sin” into the world, for which she and all women were condemned to suffer in childbirth, among other curses. This beautiful crown is a tribute to an iconic female who sought knowledge and is celebrated by many of her daughters today. 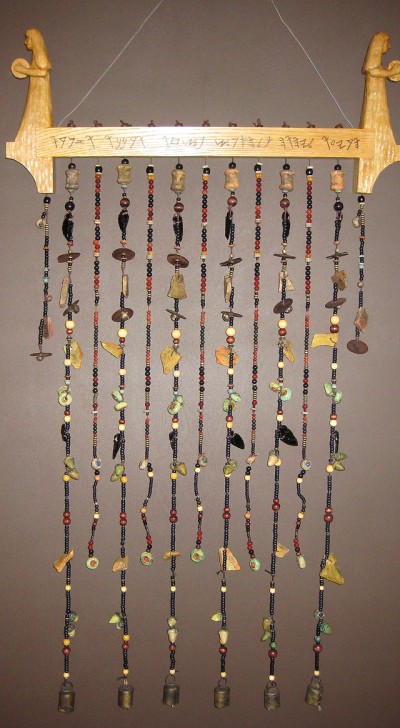 This fascinating mixed media sculpture was made by Pamela Blotner and is called “Harken: Make a Joyful Noise.” Made of “touchstones” collected during her travels around the world, it is meant to evoke elements that are part of primitive musical instruments. The artist’s guest residency at the Graduate Theological Union in Berkeley gave her access to an archive of biblical-era artifacts which helped to inspire this piece. Below is a closer look at these talismanic objects. I wanted nothing so much as to run my hands through these strands, but I refrained. Rocks, beads, arrowheads, bells, cymbals, and the runic letters along the top give this piece a mysterious presence. 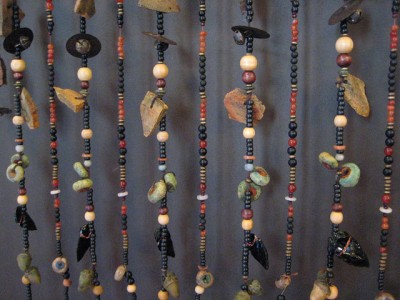 Another alternative approach to sacred words is offered by Tara Harwood in “The Story Jar.” Filled with dice covered with common mythological phrases and words, people can shake the dice and create their own sacred poems and then write them in an accompanying notebook. The little hand is that of a child who fully enjoyed being able to touch the art and make her own story. Many people throughout the evening spent time with this activity. 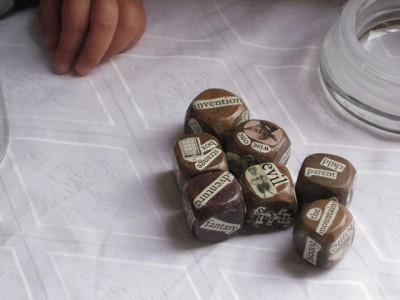 Arabic calligraphy is traditionally decorative all by itself and there are many examples of this in the exhibit. One of my many favorites is this oil painting by Najiba Baig, called “Serenity. The color of this shifted continually and showed the layers of deep waters that nourish and carry us along through life. 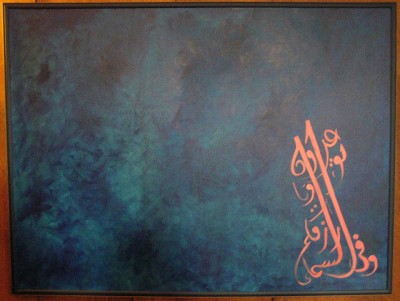 Using a more religious text, this painting is entitled “Indeed God Has Power Over Everything” and shows the script arranged in a balanced way. Perhaps the artist Azeem Khaliq uses symmetry here to show the strong foundation faith can give to one’s life in acknowledging a power greater than one’s own. 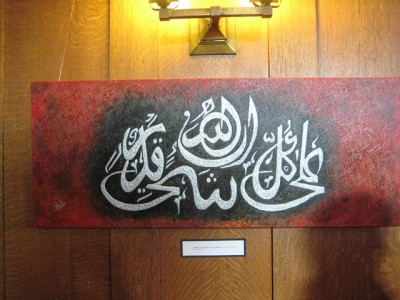 Christian art is well represented by several interesting pieces, among them this wooden door at the opening of the exhibit, called “Knock.” Made by artist Ann Lofgren with the assistance of her then-five-year-old son, it takes as its biblical text Matthew 7:7: “Ask and it will be given to you; seek and you will find; knock and the door will be opened to you.” This artist identifies as a born-again Christian; her art here represents for me the seeking of all artists who knock at the door of inspiration. 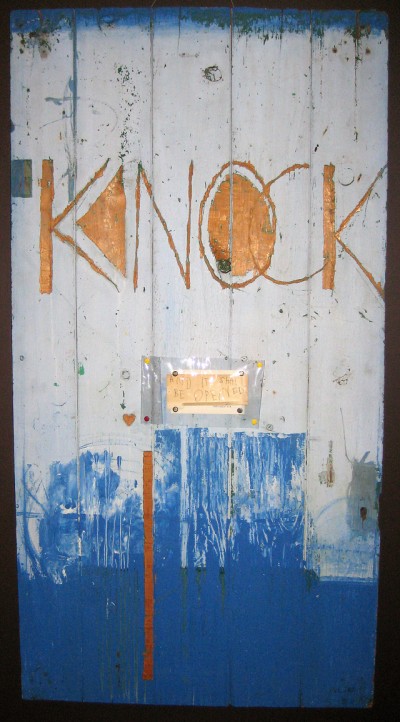 Another kind of knocking at a door is represented in this painting by Rev. Kathleen Morrison, who made this art as a kind of mission statement. Called to the ministry but at the time unable to gain entrance, she eventually found a home in a church who welcomed her as a lesbian woman into the ministry. The rainbow arching above all and the rounded communion table show a place for everyone in this stained-glass styled painting. 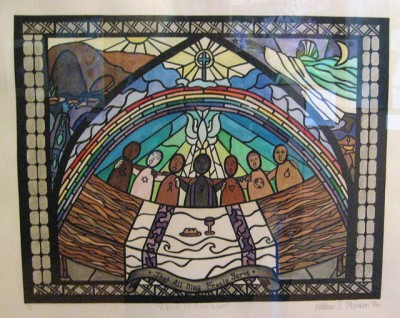 My two pieces are hung side by side, one the ancient Hymn to Earth, and the other this translation of the 13th century Persian poet Rumi, who also inspired the first artwork shown in this post. You can see how the light made photography difficult, and many pieces I enjoyed were not able to be captured in a good photo. My reflection here is emblematic of my reflections on this and the other sacred texts exhibit I am currently a part of, adding my voice to the many of spiritual seekers everywhere. 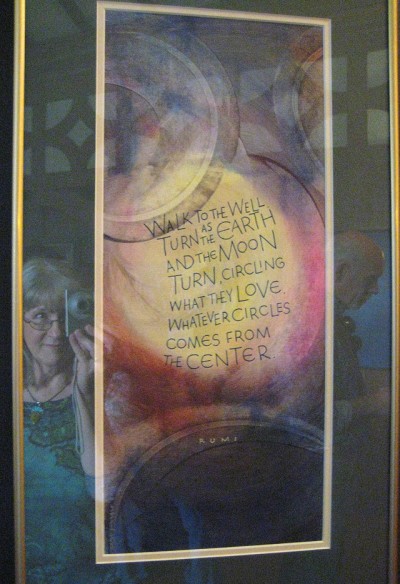 A note about the beautiful facility where this exhibit is being held: the rooms where the exhibit is shown have lovely decorative wood-patterned walls and hanging lamps with scrollwork. 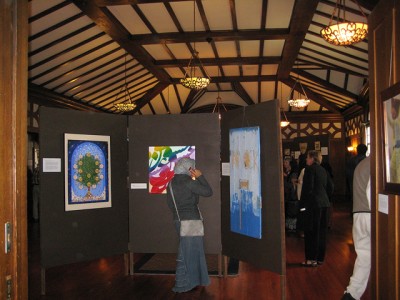 The beautiful main auditorium of the Islamic Cultural Center, shown below, seems like a beautiful sanctuary, though it is not technically a worship room. 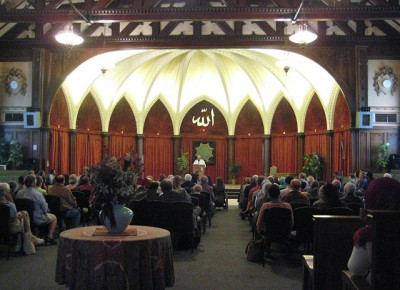 My longtime acquaintance with Persian decorative arts, from my time living in Iran long ago, made me very appreciative of the decorative aspects of this building, and added a wonderful ambiance to the show. 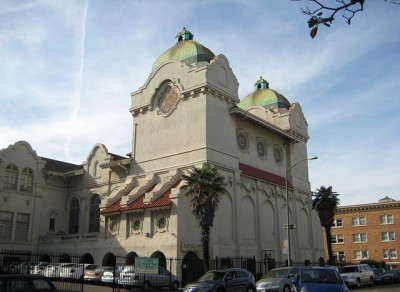 The center, in downtown Oakland near the shores of Lake Merritt, is an imposing presence. There is plenty of street parking nearby. The show runs through June 7, on Wednesdays and Saturdays between 10 and 4 and at other times by appointment. Groups interested in seeing the show should contact the center.