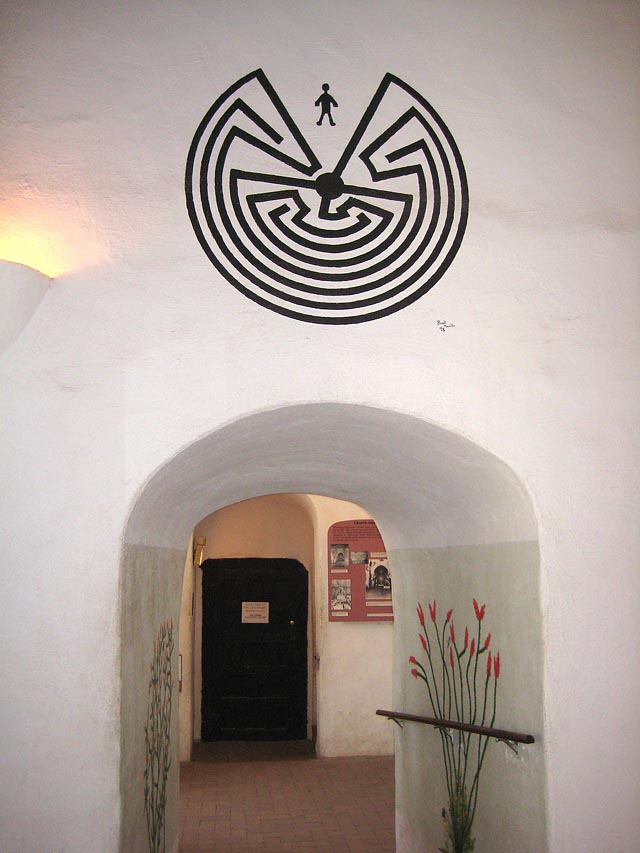 I love to see connections between different cultures and times across the planet. This Man in the Maze pattern in the American Southwest is identical to the ancient Cretan labyrinth symbol of pre-Hellenic Greece, except its corners are squared instead of rounded, and the figure of the man is included, making the reference to the labyrinth as a life journey even more clear. This one is painted on the plaster wall of the small museum to the side of the church known as San Xavier del Bac, on the Tohono O’odham reservation just south of Tucson, Arizona. The plant paintings on the walls remind me of the natural forms on the Knossos walls in Crete as well. Exploring the labyrinth form has been very intriguing for me. 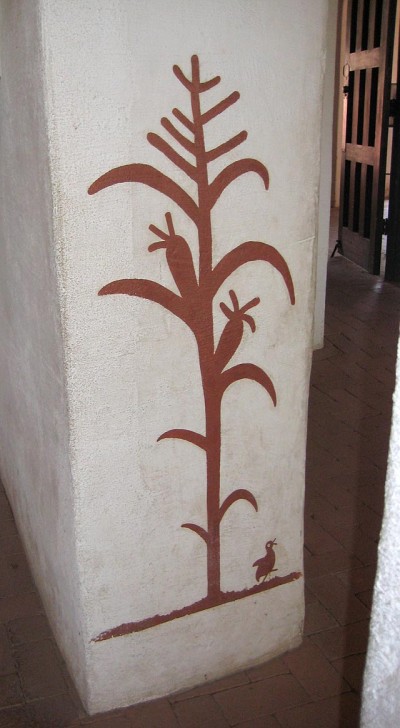 The walls are artfully painted throughout the building, here showing the ever-sacred corn plant. 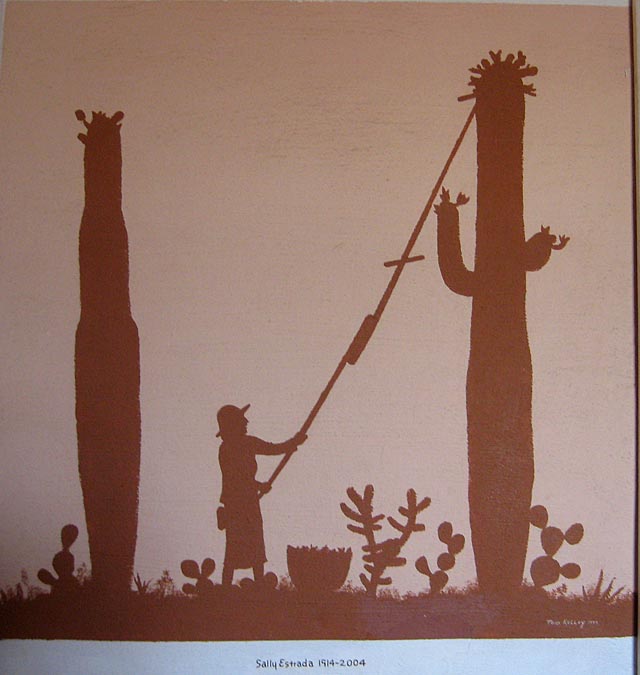 Here is a sweet silhouette drawing of the harvest of the saguaro fruit, the “nawait,” from whose red juice is made the sacred wine for the ceremony to make the rains come. The picking stick is often twelve or fifteen feet high, made of the lashed together dried ribs of the saguaro cactus itself. 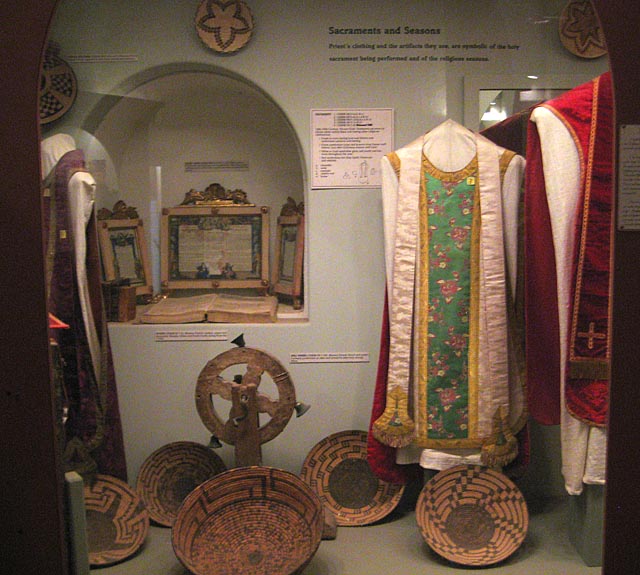 In this display case are mingled the sacred vestments and objects of the old and the new religions of the people. 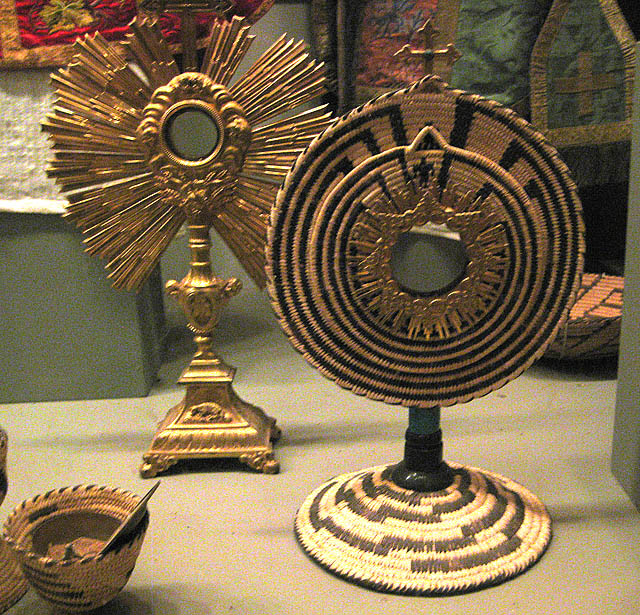 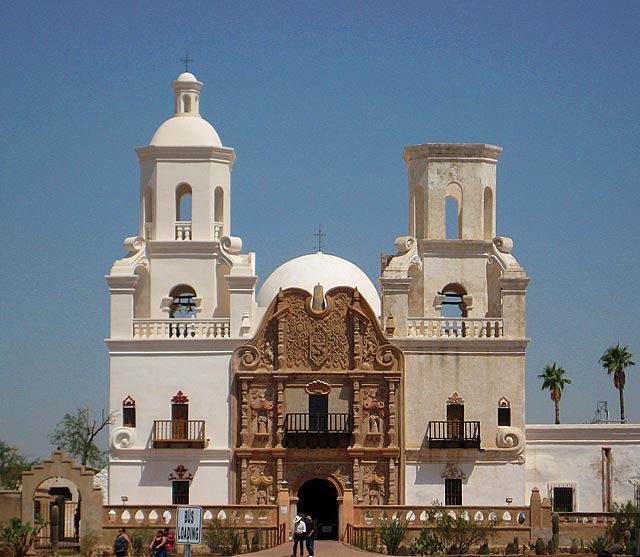 The brown baroque facade of the central entrance contrasts with the bright white towers. The two towers and dome can be seen from a great distance across the desert. This church is also known as the White Dove of the Desert. 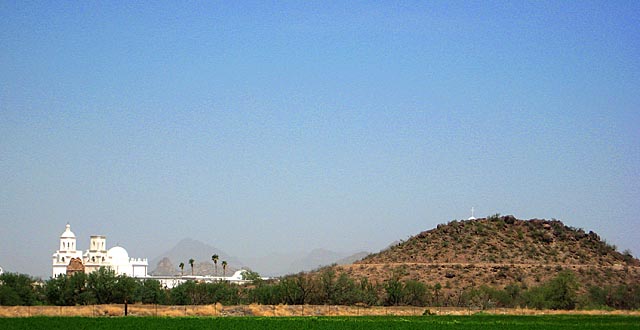 The cathedral sits next to a great mound of earth. We saw people in a steady stream trudging up and down the hill in the triple digit heat. Clearly a sacred site, it is identified in the museum as NOT being on mission property. A natural grotto in the hillside was sanctified by the Bishop of Tucson in 1908 in homage to the miracle of the Blessed Virgin Mother at Lourdes in France fifty years earlier. Perhaps the hill has an even older sacred meaning to the people who lived here before the missionaries came. I was pretty sure it must be a shrine to the Mother. She receives the most faithful and heartfelt worship in almost any Catholic church. I would have liked to see it but couldn’t manage the wilting heat AND the hill. 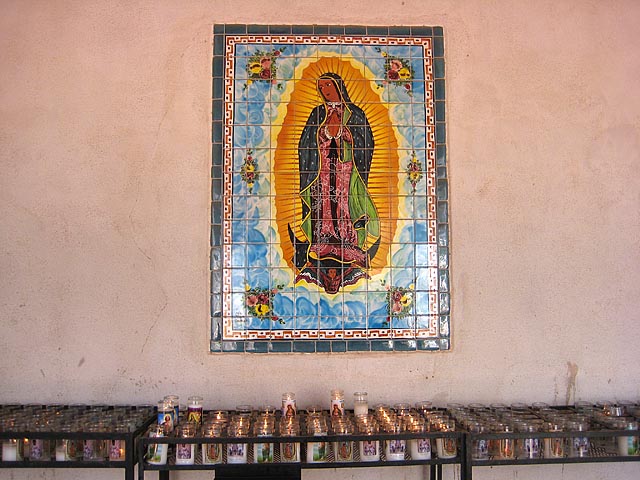 Still, She is in evidence everywhere in the church and environs, all the candles lit for Her at the side of the church, and inside the museum, a carved wooden Virgin with the Latin for Peace, Pax, made of metal letters underneath. 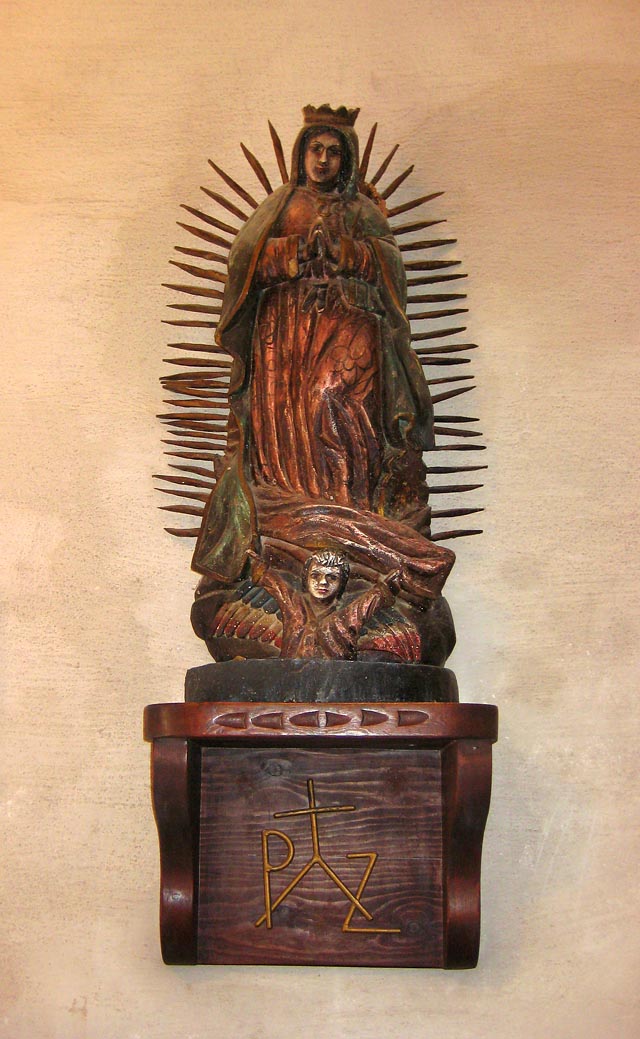 The inside of the dome in the church is beautifully painted, roundish and lovely as a womb. 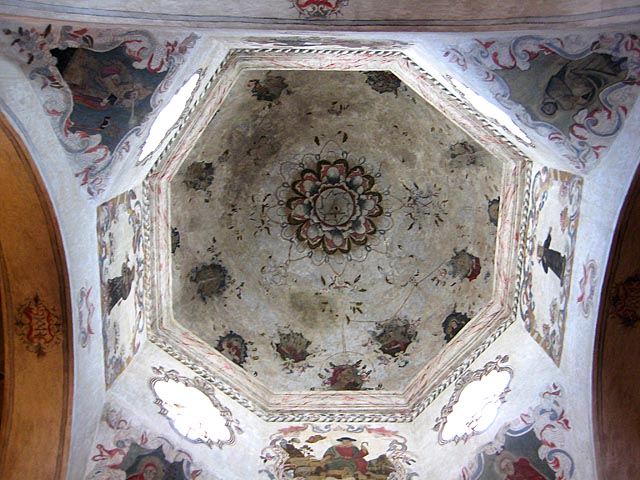 The mass was sweet with singing. Our pew was right next to the small basin of holy water at our side of the church, so we witnessed everyone blessing themselves as they came and went. Holy water is something I completely understand, especially in a desert. A big terrier lay panting on the cool tile of the aisle, making everyone, priest and communicants alike, walk around him, until a woman in a wheelchair arrived, and someone gently slid the unconcerned dog aside to make room.

It was a sweltering but unforgettable Sunday morning in southern Arizona in August. Even though this church is for a religion not my own, it was deeply soothing to be in sacred space, made so by centuries of devotion that wholly suffuses this sanctuary.

Next post: Learning and Teaching Calligraphy By the Book