Sacred Play with the Herbcrafter’s Tarot 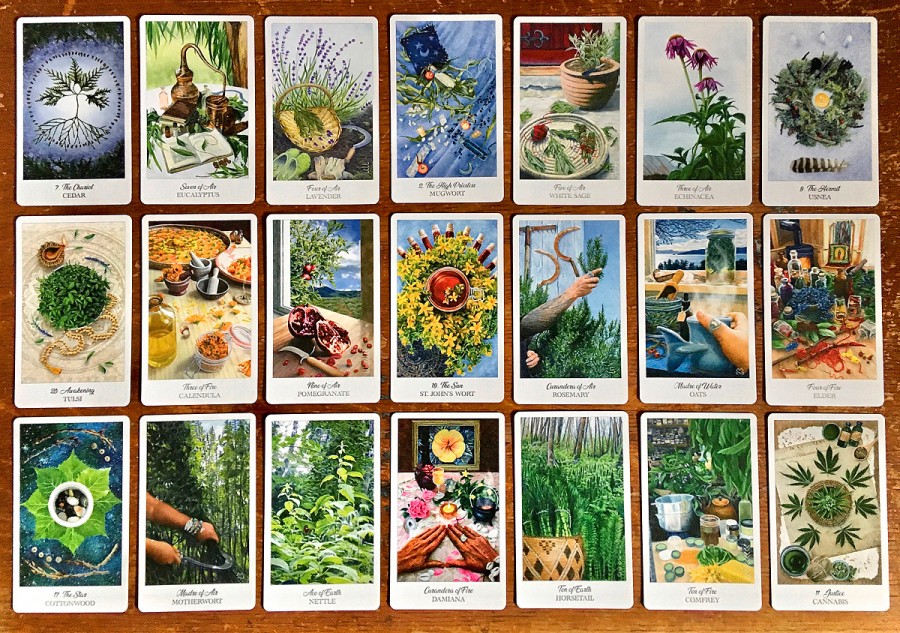 “The indecisive are always open to signs. They solicit portents; seek guidelines in the sky; open bibles to find prophetic verses. They even (I did once) walk down a row of books in a library, with eyes closed, and point to a title that will provide guidance. Eyes closed, I touched a book, and found, when I opened my eyes, that I had chosen the perfect text for the indecisive: Frank Stockton’s The Lady, Or The Tiger.”  I found this lively description of divination years ago in an essay by Jessamyn West, who I had the good fortune to know as a young writer.

I will admit to having trouble making up my mind sometimes – and how do you “make up” your mind? like a bed? like a recipe? – but another way to see it is that the world is full of symbols, if we choose to see them. Synchronicities, coincidences and patterning all delight my creative mind.

Bibliomancy aside, I have for many years enjoyed reading tarot for its images. To hold a full deck of cards with 78 intriguing images is a secret delight for me. And as with any deck of cards, they are, in my mind, meant for play. For someone like myself who is play-challenged – the work ethic was ever present during my upbringing – a tarot deck lets me put my busy mind on the back burner for a bit and frolic in the fields of magic. Mage, image, imagination, magic.

I rarely read the cards for anyone but myself, but I have had a faithful practice for many years. I ordinarily read at the new and full moons, asking questions about what might be going on beneath the surface in my work, my relationships, the natural world, or dreams.

So it was with a keen anticipation that I took my new Herbcrafter’s Tarot outside to open it in my herb and flower garden. A new crescent moon hung in the sky for a sweet augury. I held the deck in my hands and said a fervent wish that the first card I saw would be the Rose. Among the myriad reasons for this: Rose was my mother’s name, and the Empress, which I knew in this deck to be associated with Rose, is about fecundity in the earthly plane, often about mothering and pregnancy. I have been busy writing a book that is much about my mother, these last few years. I was seeking a favorable affirmation for my work.

A new deck needs thorough shuffling to really mix the cards and the moment I began to shuffle, a card began to slip from the deck. No! This one didn’t count, because I had hardly had the deck in my hands for ten seconds! I slid it back into place and continued to shuffle and cut and shuffle again, and let my mind drift, for a good ten minutes. I shuffled that deck six ways to Sunday, until finally another card jumped out – my preferred method since I don’t want to “lead” the cards but let chance have its way. This card was the Moon, indeed a good omen, for it means the deck will be richly intuitive and whisper its messages in the mystery of lunar light: oblique, full of shadows and guessing, indirect, suggestive.

Happy with my “first card” from this new deck, I then went through the entire deck, card by card, admiring the art and compositions, and after a while taking out the ones that felt like old friends. These either showed a favorite herb or were personally significant to me for their tarot symbology. By the time I was done, I had pulled 21 cards, my own personal arcana for this deck. And the very last card in my hand was the Empress. Just when I had left off thinking of her and trying to call her to me, there she was. I remembered the first card I had “seen” and hastily put back, and understood that the Rose had chosen her own entrance, third in line for the triple whammy, in her own good time, but with all dignity answering my call to her to come and be my card. And she wanted to give me the more nuanced message of a three-card reading.

I went back and retrieved the first card. It was the 3 of Earth, Raspberry. Raspberry is a sovereign women’s remedy, particularly during childbirth. Raspberry leaf tea is recommended by Mrs. Maud Grieve in her 1931 Modern Herbal, as being “valuable during parturition … should be taken freely, warm.” And here was the little joke: Raspberry is in the rosaceae family. Just to drive home the point, the 3 of Pentacles is traditionally about skill and craftsmanship, the responsibility of work in the world, and the community that will gather to help build its right structure. 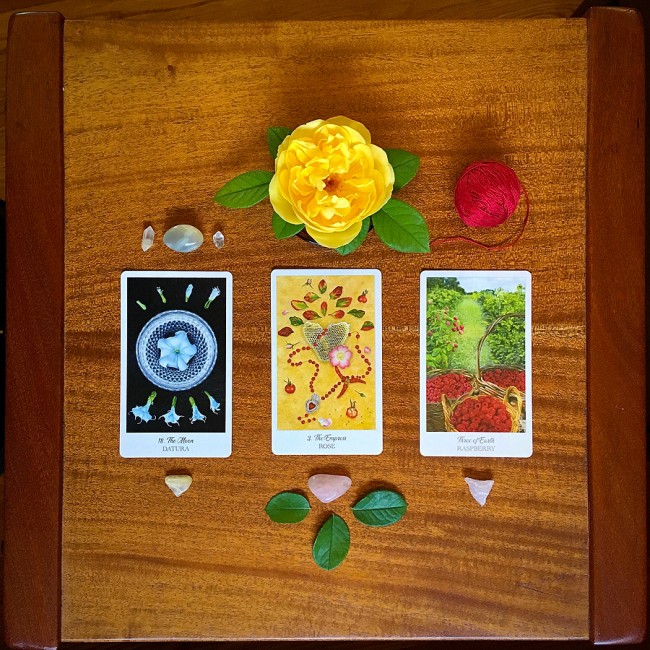 I laid out my three-card reading on my father’s table. I chuckle when I do this, for my father would not have had a moment’s patience for a tarot reading, and yet his beautiful handcrafted table is exactly the right size for a few cards. I like to make an altar, ephemeral though it may be, to remember the reading and add an additional layer of insight to the cards. Here I brought out my moonstones and my rose quartz, a couple of Herkimer diamonds to add illumination to the Moon, a ball of red thread to expand the theme of connection and circle medicine for the 3 of Earth. And I brought in a yellow rose from my garden. My mother always called me the yellow rose of Texas, since I was born there when my father was recalled to the Navy during the Korean conflict. The Empress has pride of place in the middle, though she was the third card to appear. The beeswax heart, the string of rosary beads, and the rosehip tea with honey I drink every morning, all destined this to be “my” card in the deck. And I am already learning: datura, which I know little about, was a favorite subject of the American painter Georgia O’Keeffe who planted it around her patio in New Mexico, the land of enchantment. It is often called jimson weed and its white flowers captivated her imagination. It’s poisonous properties made no never mind to her, but it has been used as a psychoactive plant and is to be handled with care. Just as the visions and dreams of the night must be read with a judicious mind. 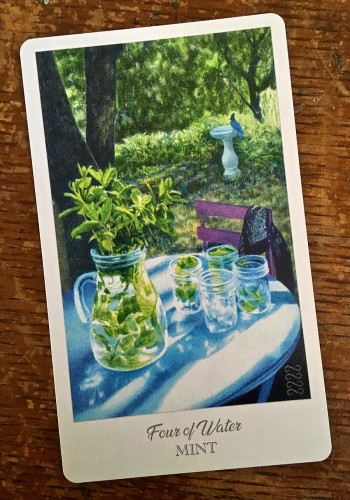 On a tarot card every detail means something. Many of the major arcana, but not all, are mandalas, setting themselves apart from the minor arcana. All of the “court” cards feature hands presenting or processing the plant. The court and minor cards have a symbolic language of their own in the lower right corners, tiny white symbols telling the card number and suit, a detail that’s not immediately noticeable but adds a layer of meaning. Enticing scenes of an herb crafter’s kitchen appear throughout the deck. In the book, the minor arcana is arranged according to the numbers, which carry a meaning and present a theme, when applied to the different suits of air, fire, water and earth.

The content of the book brings forth the spiritual attributes of these plants; it does not make recommendations for medicinal uses. Crafting ideas follow each description. The deck is lavishly made, the cards a generous size.  The deck and book are housed in a compact box. The artwork by Joanna Powell Colbert is luminous.

Of course it must have been a quandary to choose only 78 plants for this deck. I looked in vain for some of my dear favorites: chaste tree, breadseed poppy, feverfew. And there are plants I am not as familiar with, and I look forward to discovering their stories. The experience of the deck encourages  a reciprocal, intuitive relationship with all the green world, and explores aspects of plants we may not have considered before. This deck is just the beginning. At the end of the book are suggestions for how to nurture such a connection. There is also a helpful though necessarily brief overview of how to create herbal oils, incense, oxymels, tisanes, cordials, salves, tinctures and other herbal concoctions.

The story of the botanical world in The Herbcrafter’s Tarot is told from a woman’s point of view. Latisha Guthrie learned herbal wisdom from her grandmothers and aunts. It is a legacy of women’s wisdom, kept alive from times before the heroic measures of modern medicine.  This deck contributes to the ongoing effort to keep the old ways alive, in the face of despair and fear, to continue to offer healing to the people that is within our own grasp. Using the plants that grow in our dooryards and margins, the wild places that civilization has forgotten and ignored, is enlivening and empowering.

I have worked with herbs nearly as long as I’ve been playing with cards, the greater part of my life, so having them joined together is purely satisfying. I learned as a young woman the healing power of soil and seedlings. As a young mother, I learned the deeper medicine of herbs. Putting my hands in dirt, or shuffling the cards, both have the effect of taking my busy mind into a more restful place where I can let things be for a while. As my favorite curandera and cantadora Clarissa Pinkola Estés says in her audiobook Mother Night, “The strengthening that comes to us in our times of travail is so very important.” When it comes in strange ways that I might question in my more orderly times, it has a surprising intimacy, a knowing, that I have learned to listen to and respect.

Thanks to Joanna Powell Colbert and Latisha Guthrie for bringing this tarot deck and book to fruition. I know the care and joy that went into its creation. I had the treat of being able to see this deck at one of Joanna’s retreats last year and have been anticipating it ever since.  It was truly a labor of love. I look forward to many occasions of insight, revelation and curiosity with the Herbcrafter’s Tarot. 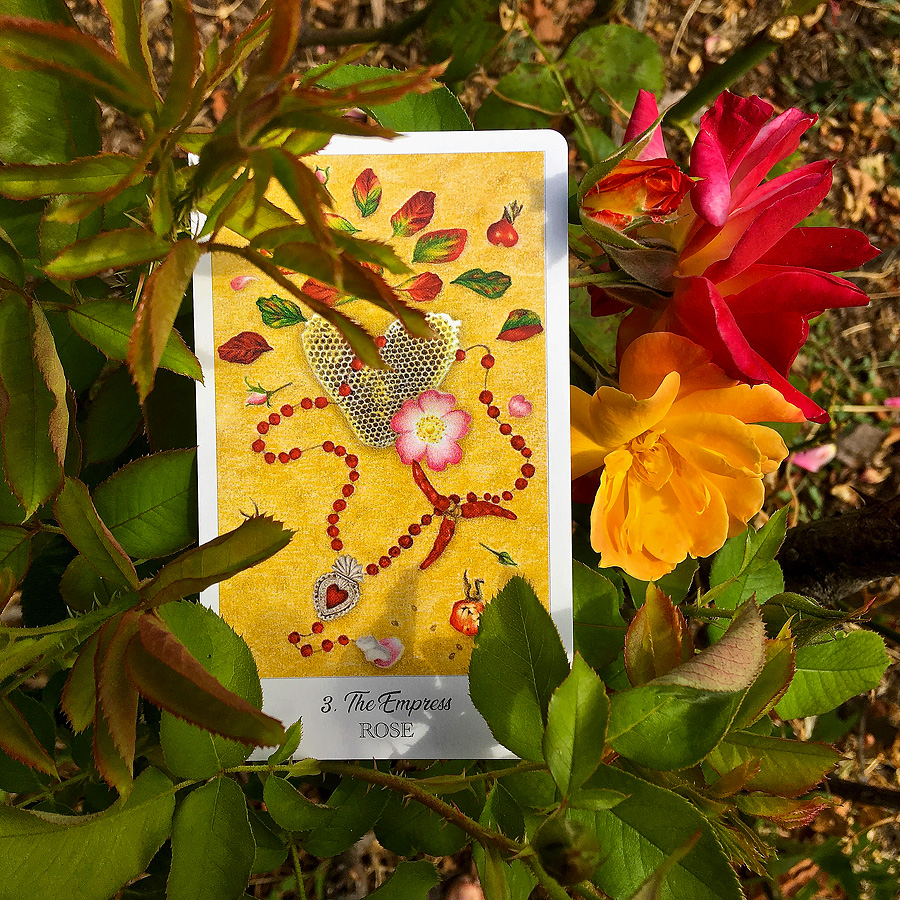 Previous post: Filling the Well at the Codex Book Fair