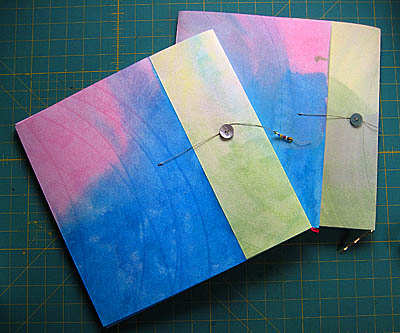 These are some portfolios I made this past week for two of my square mandalas that have gone a-traveling. They are being shown in Berkeley at a conference this week sponsored by Church Divinity School of the Pacific, the Episcopalian seminary for the west coast. Last summer, the conference director contacted me about using my Five Sacred Elements artwork (reproduced here as a greeting card) to make a logo for the conference Epiphany West 2010: Sacred Elements: Creating Sustainable Earth Communities.” The original handmade mandalas are eleven or twelve inches square and are embellished with collage, ribbons, beads, charms, foil highlights, and silken cord loops for hanging from each of the four corners. Here they are ready to be folded up to go. Before closing, I put a piece of protective paper across the painted centers before laying the ribbons and decorations across. They travel pretty well this way. One portfolio is made from heavy Bockingford watercolor paper, the other from 2-ply museum board. I recommend the watercolor paper if you are making a lightweight portfolio; easier to fold and handle. 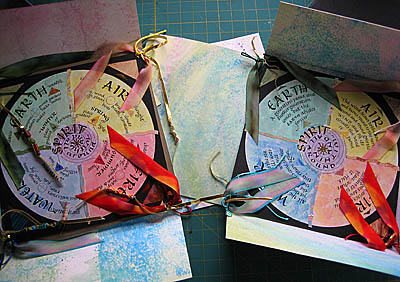 Part of my agreement with the seminary was that I could exhibit two of the mandalas I made ten years ago, one with the attributes of each element of Earth, Air, Fire and Water as they are invoked in many pagan circles, and a similar one with the four elements described by passages from Ecclesiastes in the Christian Bible. Both have the Fifth Sacred Element in the center, Spirit, with the words, Within and All Around Us. I made these two similar in appearance to demonstrate the link between them, to show that the faith I grew up in had many things in common with the pagan faiths IT grew up in, the ancient European ways of apprehending the universe. I did the same thing with my Wheel of the Year mandala, drawing parallels to show that people of spirit often have more in common than they realize.

After I had two of these mandalas reproduced as greeting cards in 1999, I had mixed reaction from some buyers of my work; one thought that these were “too cultish.” This surprised me as I felt I had tried to make this artwork as non-threatening as possible, to show links instead of division. But it turns out I was perhaps just a little ahead of the curve. Earth-consciousness has changed and risen up in the last ten years. I made these at the end of the last millennium; pre-9/11; pre-Bush-gutting-environmental-protections, and pre-An Inconvenient Truth, Al Gore’s best-selling plea to pay attention to climate change and environmental destruction before it is too late. Now it is cool to be green, my mandala cards are strong sellers among people of many faiths, and a mainstream religion (a progressive one, to be sure) is featuring sustainability at its conference and using my artwork to promote it. This is win-win all around. And finally, after ten years, these two mandalas can be exhibited together. The Ecclesiastes one traveled to the Washington Cathedral in 1999 to be shown in a calligraphy exhibit there, but the Five Sacred Elements was rejected; it in turn has been shown in venues that would not include a piece with Christian texts. 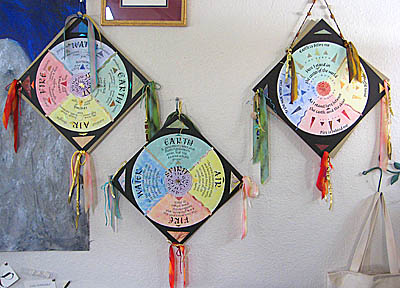 Above is how they look hanging up on a wall in my studio. The one on the far right is the original one I made in a workshop at the 1998 calligraphy conference in San Diego, in a class inspired by Hildegard of Bingen, taught by two of the calligraphers who at that time worked at the Washington Cathedral, Louise Megginson and Carolyn Armbrustmacher. It uses a poem by Ceisiwr Serith:

It was a chant to teach to children, and was an especially good match at our house, since when we stand looking north, the creek is always to our left, to the west, and beyond that, the Pacific Ocean. There are many ways to orient yourself in the world, but an awareness of the ground, the sky, the breeze and the waters is one of the best, in my experience. May it be so for you.