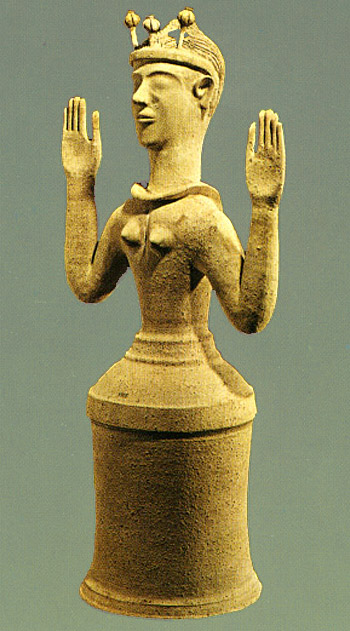 This goddess or priestess figure is from ancient Crete. The Minoan civilization which produced it has such a wealth of goddess imagery I hardly know where to begin, but this one comes to me in meditation. She was made from clay about 2300 years ago.

She holds her hands up to receive and bestow wisdom. Her tubular skirt is typical of many of these figurines and can be seen as an opening for earth wisdom to rise up into her. Her eyes seem closed, as if in trance. And from her crown arise three poppy seed pods.

Poppies are the source of opium, which has been used for millennia not only for sacred trance, but for its unequaled pain relief. Many if not most of today’s narcotic pain relief originates in the poppy. It is also the source of heroin. The poppy, like many medicinal plants, has its dark and light sides. This figure’s crown shows her to be an initiate of poppy’s mysteries. 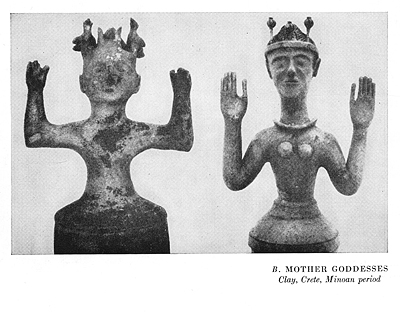 Body wisdom: This posture appears in qigong exercises and is also a posture I have seen many people use while praying, both pagan and christian. I meditate on poppy’s gifts: during mortal illness or wounds, end of life, major surgeries, chronic pain, poppy makes these difficult things more bearable. A gift from the plant kingdom indeed.

Top image from a now broken link; apologies. But this might be a resource: http://www.hartzler.org
Bottom image: The Great Mother, Erich Neumann