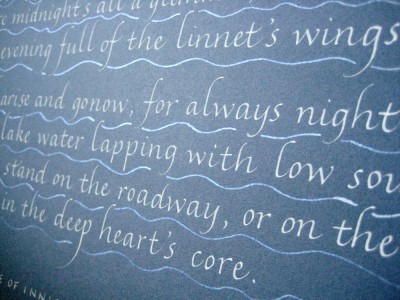 As the summer solstice approaches, when the sun seems to pause in the sky before beginning the long arc toward winter, I find myself with some still moments, a quietness within. And so, “peace comes dropping slow” and poetry resonates in my mind.

I had the pleasure of immersing myself in “The Lake Island of Innisfree” during a cold March, when summer seemed far away. Now its words are a lovely midsummer’s dream, playing over again in my memory.

This poem was commissioned to be given as a gift to a young man who learned it as a child in Ireland, where it is memorized during school days, making it one of William Butler Yeats’ best known poems. Written when he was quite young and inspired by Henry David Thoreau’s Walden, he was not overly fond of it in his later years, but it is nevertheless deeply loved. 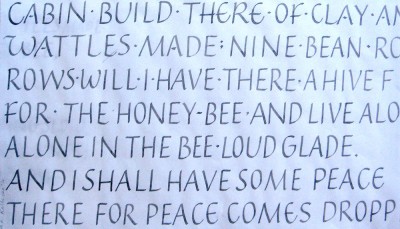 I wrote it out many, many times, not only to warm up my calligraphy hand, but because I loved being with these words. In the end, I decided a simple italic was best, and my elaborate plans to represent waves lapping on the shore resolved easily into shining wavy lines, which universally read as water. An iridescent blue Golden fluid acrylic in a ruling pen seemed best, and, for the letters, Dr. Martin’s Bleedproof White in a Tape #1 size nib, on a 16 by 20 inch dark blue piece of Ingres paper I’ve had in my flat file forever, waiting for just this use. I considered “bouncing” the letters along the line, but in the end the slow rhythm of waves lapping on a shore induced the calmer presentation . 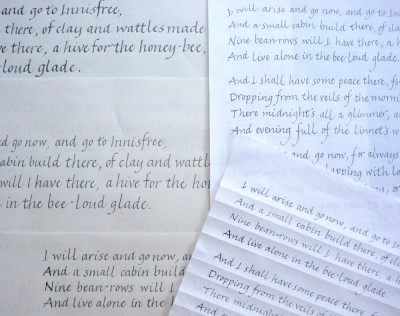 As the great Wheel of the year processes through the longest day in the northern hemisphere, some of us will go to the waters. The ocean, the rivers, the lakes, the creeks, will all be especially honored and loved during the hot days of summer. 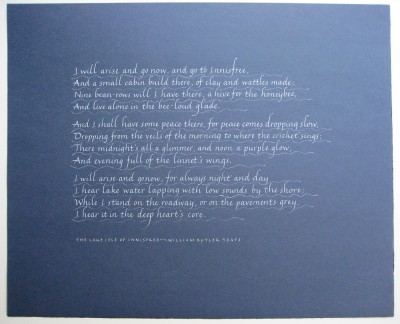 The Lake Isle of Innisfree

I will arise and go now, and go to Innisfree,
And a small cabin build there, of clay and wattles made;
Nine bean-rows will I have there, a hive for the honey-bee,
And live alone in the bee-loud glade.

And I shall have some peace there, for peace comes dropping slow,
Dropping from the veils of the morning to where the cricket sings;
There midnight’s all a glimmer, and noon a purple glow,
And evening full of the linnet’s wings.

I will arise and go now, for always night and day
I hear lake water lapping with low sounds by the shore;
While I stand on the roadway, or on the pavements grey,
I hear it in the deep heart’s core.