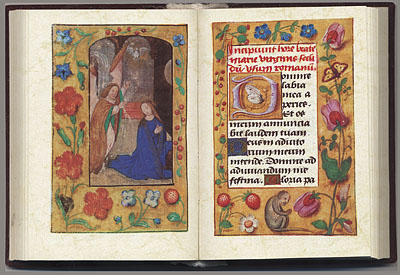 I have been thinking about prayer books, books of devotion. Pagans really don’t have a set of scriptures that we follow, though we often read widely and are deeply interested in various spiritual paths. For as long as I have been making books, I have been doing so with the idea that perhaps they might be used in such a way, during ceremony, or for private devotion to a poem, an invocation, a blessing, or a teaching. But they might look different than the beautiful medieval one shown above, a page spread from The Book of Hours of Pannonhalma, published as a facsimile of the original book in Budapest, though come to think of it, this book is full of natural imagery in the borders.

A couple of years ago I was invited to contribute work to an invitational exhibit at the Milwaukee Institute of Art and Design, called “Sacred Texts, Contemporary Forms.” The curator asked me to contribute some pagan sacred texts, because she was trying to represent every religion and spiritual path. So I sent her The Charge of the Goddess, The First Writing, and one of my original 12-inch wall Wheel of the Year mandalas. Since I couldn’t attend the planned forum for discussing the works, I was fortunate to have Selena Fox of Circle Sanctuary in Witchconsin (her word for Wisconsin) travel through a blizzard to speak at this forum. Selena travels everywhere she can to be part of interfaith conversations and thus was the perfect person to speak for the pagan path at MIAD. In our dialogue prior to her appearance she said something that has stayed with me: “Nature is our Book.” And she is right. I read the sky, the creek, the wind, the animals, my own body wisdom and my own experience to connect with the sacred.

Still, I was brought up with sacred books, and had my first glimpse of calligraphy and illumination in church when I was a child. My scribal training led me to the marvelous and precious Books of Hours that medieval folk (rich ones) used for their daily devotional practices. Beautifully illuminated with color, rich calligraphy and flashes of gold, these treasures represented a way to connect with the Divine.

My sister recently shared with me the dedication written into the Bible given her by our paternal grandmother at her confirmation in 1970: “May you find within these pages light on your path and a well of refreshment as you travel the upward road.”

The upward road. My grandmother was a pillar of Trinity Episcopal Church in Columbus, and performed many good deeds and good works. I didn’t get a Bible for my confirmation from Grandmother Hoyt; instead she gave me a collection of Robert Frost poems for young people, which I still cherish, called You Come Too. Perhaps a sign of things to come, for I would feel far more religious about poetry than I ever did in church.

Beginning with the little tattered prayer book I made for my kids when they were 2 and 7 (a poem about Mother Earth, Father Sky, Sister Rain, Brother Wind, one page pictured here) I have tried many times to make books that could be used in ceremony, or kept on an altar. I still like the idea of prayer books, but true to my roots with Robert Frost, they are often full of poetry, small books that can be held in the hand or kept in a pocket, with poems honoring nature or our Mother Earth. I have just finished making such a treasure, but more on that in my next post.

For my everyday use I have started using a pretty little journal I made about five years ago after I took a class in non-adhesive bookbinding, to collect prayers, blessings, spells, verses and poems that have spiritual meaning for me. There are not too many entries yet, because I’ve put the unrealistic expectation on myself that they must all be in calligraphy, but that is loosening a little. 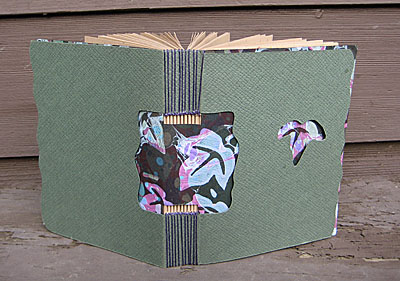 It occurs to me that an extraordinary tarot deck just being published called the Gaian Tarot is a sort of sacred “text” for pagans. The images that Joanna Powell Colbert made are so compelling and real – she used real people, friends and family for her models – and in the truest pagan tradition it’s more about the images than the words that describe them. Images go straight into our deepest child self; words take too much thinking, but images are magical, in fact come from the same root. Image, magic, imagine.

I love the images in this deck. And, no surprise, a deck of cards can be seen as an unbound book, just large enough to be held in the hand. And if they are sometimes used for divination, that word need not be scary, for divination simply means trying to connect to the Divine.

A piece of my artwork, with words by Rumi, played a small part in the creation of the Elder of Water. But I particularly like the one I show here from the Major Arcana, #20. In traditional tarot this card is called Judgment. I have some trouble with judgment, both giving and receiving it, perhaps unfairly, my entire life. So I love that this card is instead called Awakening. And it does indeed portray having traveled the upward road. Realizing we are all kin. We are all in the circle of life together. We all are born from the womb and return to the tomb – the spiral entrance stone from Newgrange represents this – and if we are lucky, reach a place of greater understanding and compassion for all of our relations. 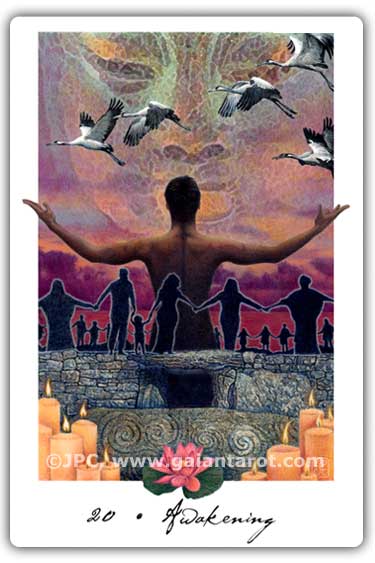 My vision for world peace would be for all the world leaders to stand in circle together, as in this image. I know, it’s a dream. But like John Lennon said, “Imagine.” Or Paul McCartney: “When all the broken-hearted people living in the world agree, there will an answer, let it be” – this is arguably the most beautiful Goddess hymn written in the 20th century: “Mother Mary comes to me, Speaking words of wisdom, Let it be”. The circle rocketed into our consciousness forty years ago when we saw our precious Earth as a round blue and white marble in the black vastness of space, and the circle is a form that is needed in world affairs now, not just in our spiritual practices. King Arthur had it right, in creating the Round Table. We are all at the table. We are all equal, and children of the Earth.