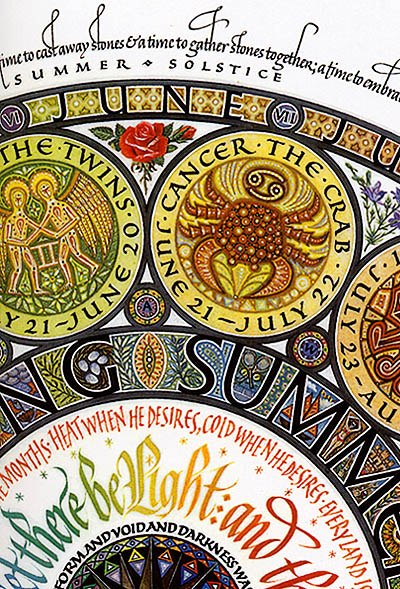 During my two-week trip to the east coast, I spent nine days in the lovely home of Sheila Waters taking her independent-study master class. This, for me, was the realization of a dream that took root decades ago. It was sometime in the mid-eighties that I opened up the 21st edition of the Speedball Textbook and was completely floored by seeing a reproduction image of Sheila Waters’ Roundel of the Seasons, created in 1981. The detail image above shows the actual size in which it was created; for years I have had a poster of it at 200% of its actual size, so to now have an archival print of the Roundel in its original size (13″ x 13″, showing on my monitor set to 1024 x 768 pixels) inspires me all over again. What I felt when I first saw this piece of artwork is not so different than what I feel now: awe and reverence for a true master of the craft, and the lightning bolt realization, back then, that calligraphy could be so much more than making pretty party invitations. It could be Art. That was completely radical to me then and has driven much of my work ever since. I think I can safely say that it had a similar galvanizing effect on an entire generation of emerging calligraphers. It is for this reason that Sheila Waters was my first Hero of Calligraphy, and so it was a complete honor to study with her this past June. Below, an image of Sheila’s scriptorium, every work station complete with comfortable chairs, a slant board, a good light, plenty of space, and her incredible library and collection of work to explore. 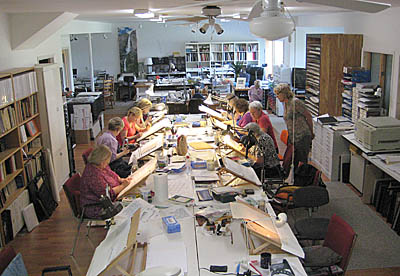 It has been a long wait for me to have my week with Sheila. She and her family moved to the United States from England in 1971, coincidentally to Bethesda, Maryland, the same year I left Bethesda for California, so we were a bit like ships passing in the night. Nevertheless, some kind of fate was at work, so even though I was in faraway California, I took up calligraphy in 1977 and dabbled around in it, but didn’t get really serious about it until 1985 when my first child was born – somehow I needed that creative outlet that was all my own – and it wasn’t long after that that I saw Sheila’s Roundel and my thinking just shifted into high gear about what calligraphy could be. Her class in bookhands was my choice when I attended my first calligraphy conference in southern California in 1994. Her inability to come at the last minute was disappointing, but the serendipitous appearance of Alice Koeth of New York in her place was a fine substitute and I felt mighty lucky to be able to study with such a treasure as Alice.

Fast forward to 2010 and I am feeling like my basic skills are getting rusty with all the freeform stuff I have been learning to do in the last decade, so when I heard about Sheila’s masterclass I decided it was past time for my weeklong with Sheila and finagled an invitation (it is by invitation or recommendation only). I hadn’t been back east in eleven years, and am still in touch with my best friend from eighth grade art class, and was also on a secret mission to the National Museum of Women in the Arts (more on this later). So I cashed in some frequent flyer miles, packed my bags and away I flew to the land of my youth, junior high and high school years in particular. And much to my delighted surprise, when I got to Sheila’s beautiful home in rural Pennsylvania, I worked really really hard, as I expected to, but I also had a supremely fun and hilarious time with a scribal sisterhood, only two of whom I knew ahead of time but all of whom I considered to be dear friends by the end of the week. And though Sheila still, at the age of 81, has an eagle eye and a steady hand, she is also a stitch and had us laughing all week. And on the last evening, she even sang for us! Below, you can see Laurie Doctor’s delighted appreciation reflected in the mirror behind singing Sheila. In the end, we were all singing. 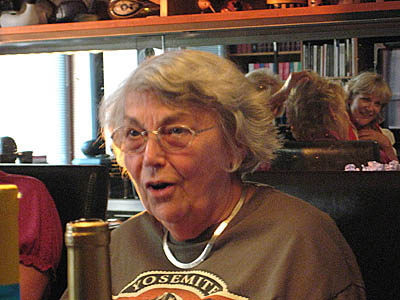 For my independent study I decided to work on cleaning up my foundational bookhand, and boy, did I discover lots of areas to work on. It was truly an experience of beginner’s mind, and so very good for me. I also worked through the intricacies of writing on calfskin vellum, both hair and flesh side, which require different approaches, how thick or thin to make the stick ink, how to line up using dividers on the outer edges of the pages (which will later be trimmed off) so the show-though will not be a problem, working just as the medieval scribes did, how to correct a mistake by scraping and repreparing the area with gum sandarac, how much sanding is right and how much is too much, and how to paint as well as letter on the vellum. Now I feel ready to attempt a small manuscript book, though I despair of ever being able to write as small as my medieval predecessors did, who were using a quill, not even a steel pen. Below is a picture of a binding made using a piece of medieval vellum for the cover material. You can see how tiny the writing is next to my giant fingers (and how worn the letters). Nevertheless by the end of the week my writing was much improved, but I still am so critical of it I don’t think I can share it with you; just look for new and improved lettering in future work. 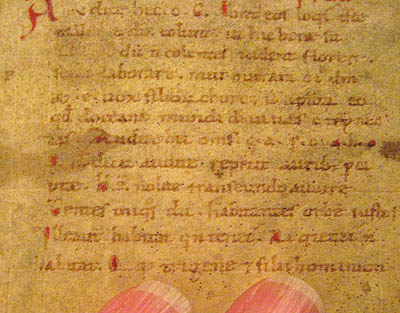 Sheila’s house is a marvel of art and beauty, as you would expect. Below, even the bookcases are decorated with lettering.

Among the treasures available for us to explore were a very rare set of the original rubbings Father Catich made of the Imperial Roman letters on the Trajan Column in Rome. To see these rubbings and the exquisite beauty of these letters was breathtaking, even to the slight difference in height between the top and bottom lines of letters to allow for them to appear the same height to the viewer looking at them from the ground. Below, a couple of samples; I particularly like the extra high “I”s in “DIVINE.” 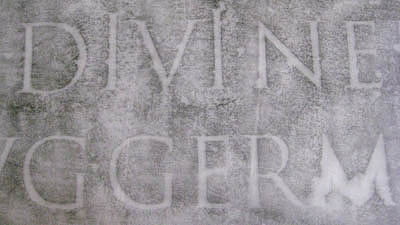 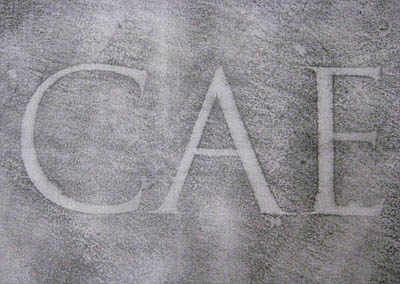 One of the highlights of the week was Sheila’s sharing with us the bookbindings made by her late husband Peter. I don’t believe I had realized just how closely this couple worked together during their fifty-year marriage. The family’s move to the United States in 1971 was prompted by Peter’s designing and overseeing the new department of conservation at the Library of Congress in Washington D.C., work which has influenced generations of library conservators ever since. Sheila prepared us one evening by showing us a video she had produced showing some of Peter’s bindings with commentary about his life’s work. In addition, she also showed us the 1968 film about the restoration work in the National Library of Florence after the 1966 flood: “The Restoration of Books, Florence 1968.” Thanks to Sheila’s sleuthing (finding it hidden in her bookshelves) and her son’s conversion to digital format, this film can be seen on the University of Utah’s website [NOTE: November 2021 this link is no longer valid]. The video shows vintage footage of the terrible damage to the rare books of Florence, some of the conservation techniques developed during this disaster, and in addition shows Peter Waters demonstrating how to construct a leather binding and Christopher Clarkson doing the same for a limp vellum binding.

Being able to see and hold Peter’s beautiful bindings was a rare treat. There were many beautiful ones, from his student days up to the most beautiful exhibition bindings imaginable. I have included a few photos of only one of the bindings here; the first one shows Sheila holding the book upright with the spine lettering oriented from the bottom up, in the “old way” than we are used to seeing. The exquisite binding of the book about Beetles was a true collaboration between the couple. The design on the cover was copied from the pattern on the back of one of the beetles illustrated inside the book; in the closeup you can see the intricate work involved in the leather onlay, which felt as smooth as if it was all of one piece. And the tiny gold beetles interwoven in the pattern were all drawn by Sheila and made into metal stamps for the application of the gold tooling, each one different and minutely drawn. It was difficult to choose which books to show here; this one was only one of many on which Sheila and Peter worked closely together. Over the years Peter contributed as much to Sheila’s work as she did to his, making their marriage a wonderful collaboration in every way, not only in the raising of three sons but in all of their professional work as well. 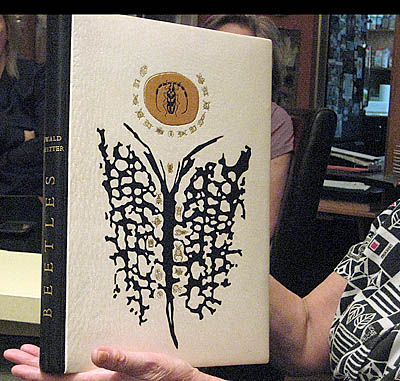 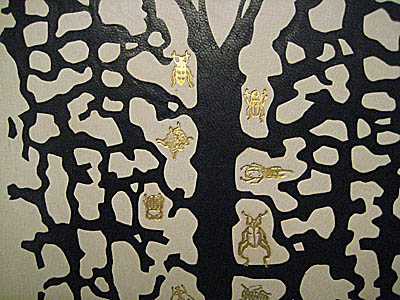 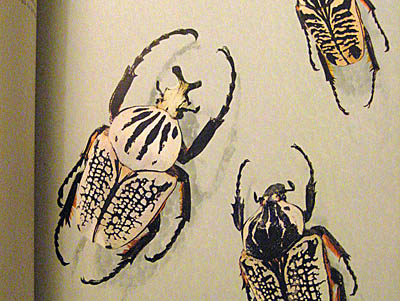 In 2009, a major retrospective exhibition of Sheila’s work was featured at the Strathmore Arts Center in Bethesda, Maryland. Over two hundred pieces of her work were gathered together for the show, and also included were rare examples of Peter’s bookbinding and calligraphy. Afterward, her son Julian Waters, himself a world-renowned calligrapher and artist, produced a special 50-page issue of Scripsit, the journal of the Washington Calligrapher’s Guild, which Sheila founded decades ago. This was truly a labor of love, as Julian designed the font especially for the issue based on Sheila’s dynamic modern interpretation of the ninth century style known as Carolingian, which she developed for her famous manuscript book, Under Milk Wood, a play for voices by Dylan Thomas. Looking through the Scripsit pages is a visual feast, and the sensitively written text adds great depth to the story of Sheila’s career and art. Included are images of her working drafts for the Roundel as well as many other works, from very early drawings to her most recent work, a lovingly produced tribute to Peter. I highly recommend obtaining a copy of this journal before it is sold out. Signed copies (by herself and Julian) are available from Sheila herself, for $30 plus $5 shipping. She also has signed copies of her magnum opus, Foundations of Calligraphy, truly one of the best calligraphy and design instruction manuals available, for $35 plus $5 shipping. You can reach Sheila at this email address: waters_sheilaATyahoo.com. 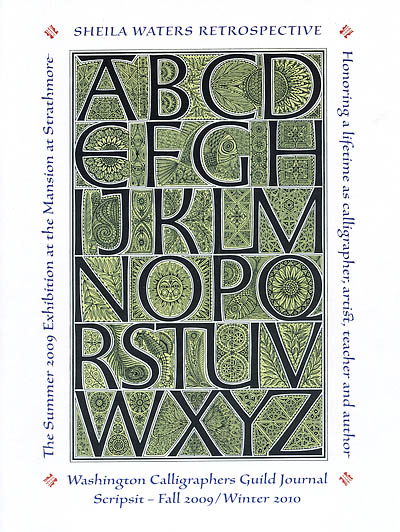 Finally came the end of this magical week. I am indeed a fortunate student to have had this opportunity to learn from the best of the best, in her own superbly comfortable house (yes, complete with laundry facilities, as you can see by the well used clothesline behind us, below), to have gourmet meals prepared for us every single evening by her dear friends and neighbors, to be able to relax in her wonderful hot tub, and to learn so very, very much. 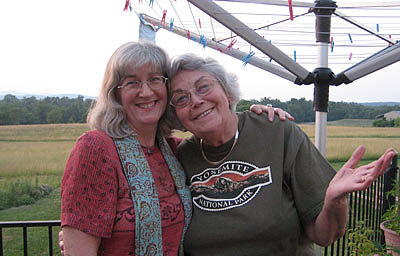 As the sun set over the Blue Ridge mountains on the last evening in this view from Sheila’s back deck, I thanked my lucky stars to have had this week “out of time” to pursue my craft, finesse my art, and to know that now I can in all honesty and humility number Sheila among the wise female elders who have mentored and taught me so much. 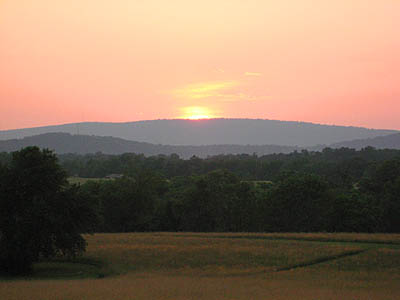