My Faithful Community of Writers 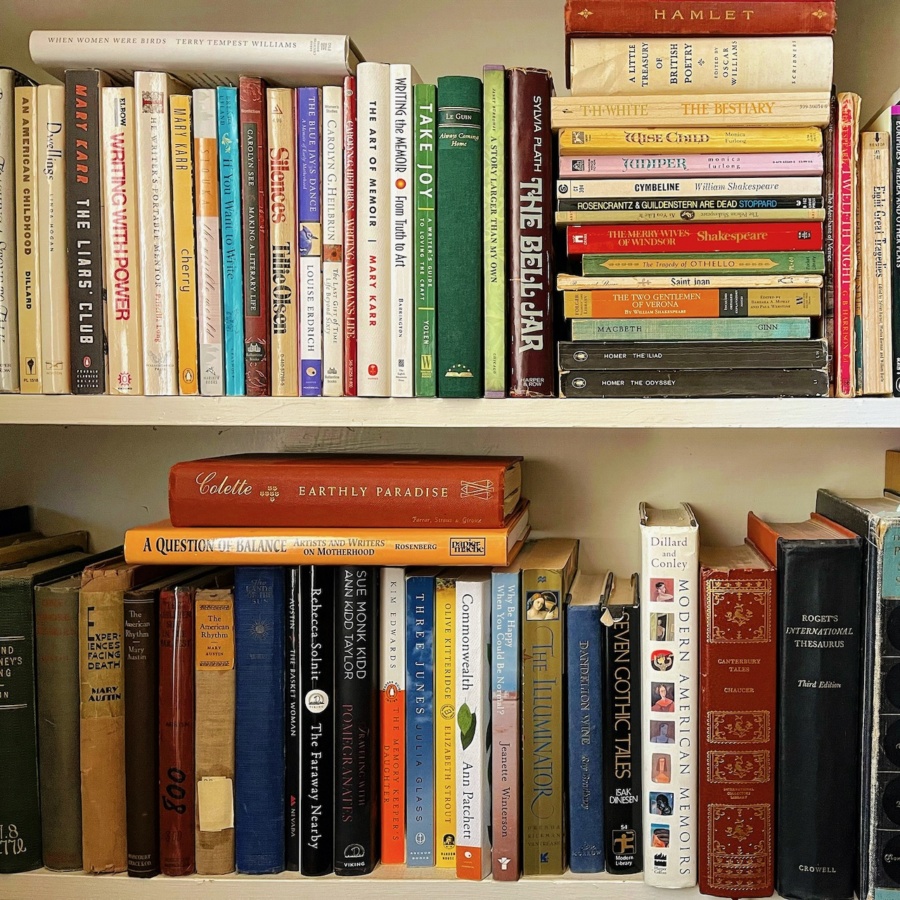 A few days ago, I woke in the morning with an image of an old book in my mind. First I found the book, on a bottom bookshelf, and blew the dust of decades from its top edge. Then I found the scene I had cut from an early draft of my memoir Mother Knot, in the folder where I always keep deleted content.

Its title is “Working as a Typist.” The year is 1973, the place is Southern California, and I am nineteen years old.

The closer I came to leaving home, the more fraught the dinnertime conversations with my father became, tinged with more challenge and ridicule. Classes at the junior college had stimulated my opinions about political and social issues, but when I tried to express them, the terrain was rocky. It was a tense time in the country and it filtered down to our table. The war in Vietnam was the source of protest in the streets, and Nixon was on his way out, though we didn’t know it at the time. My mother resumed her silence at our exchanges, an onlooker only.

My father was a man of science, an engineer who understood his world only through reason and quantifiable mind. He scoffed at my desire to write poetry. I sat at the dining room table trying to speak a language that my father could not hear, a language of feelings and unseen things. When I was inarticulate with emotion, what came instead of words were tears.

I was earning money by typing dissertations for professors  and struggled with a new one who insisted on being called a doctor because of his Ph.D in Sociology. Mounds of paper clips were the only way to handle the inundation of papers he gave me to type. As hard as I tried, he was still full of corrections and criticisms of how I did his work.

“I strongly suggest that you take a course in office procedures. It’s the only practical thing you can expect for your future.”

“What! Aren’t you aware of the difficulties in making any kind of living at it? Are your parents upset?”

I kept silent and thought of the university in the redwood forest at Santa Cruz. He wasn’t paying me enough to listen to this. Yet he went on.

“If you don’t begin thinking more realistically, you will just end up having to find someone to marry you and take care of you.” 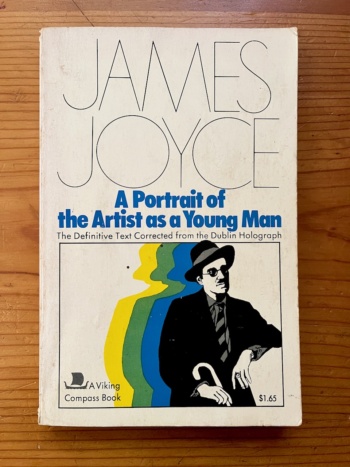 I affected an indifferent attitude to these gibes from the men of authority in my life. But while I pounded the keys on my Olympic typewriter I often felt tears of self-pity sliding down my face. I will never get out of here, I wrote in my journal. I am so lonely.

I had sold my car to add the funds to my savings account and bought a cheap bicycle.  When melancholy overtook me, I fled the house and pedaled over to a secret place on a hillside at the park. From there I watched the day sink into dusk. When the sky became beautiful I could breathe again.

One evening I rode home with my purchases strapped to the back of my bike: a copy of Joyce’s Portrait of the Artist as a Young Man from a new downtown bookstore, wedged atop a sack full of office supplies: paper and carbon sheets, ink erasers and white-out. I wanted to read but had to type and stifled my mutinous thoughts. My isolation was giving way before the great friends I was discovering, writers who had lived years before I was born. I was hardly alone.

I pulled this book out of oblivion because I wanted to remember that early friendship with other writers. There was no book called Portrait of the Artist as a Young Woman when I began writing in the early 1970s. I took what I could get, and gladly. When James Joyce wrote of his protagonist that “he began to taste the joy of his loneliness” I nodded and underlined it. But when he wrote, “Sometimes a fever gathered within him and led him to rove alone in the evening along the quiet avenue,” I underlined it, but now shook my head. Even when I lived in suburbia in the 1970s, I never walked out in the evening without thinking twice about whether it would be safe.

This June I participated in a writing challenge, #1000wordsofsummer. A thousand words a day of free writing was just the medicine I needed after weeks and months of rewrites, editing, and revision. My only criteria was that the writing be in third person. Otherwise, I had no agenda. No stopping my busy fingers until the bottom window signaled 1000 words. Sometimes I would keep going. But sometimes I would stop right there, in the middle of a sentence, the better to pick it up the next day.

The free writing was simple fun, and extraordinarily fruitful. Because I was participating in a writing event that had attracted many hundreds of other writers, I decided to set myself a task to share a quotation about writing and a photo every day on Instagram with all the appropriate hashtags. For many years I have collected quotes of lovely or meaningful writing. So deeply have I loved those crystals of wisdom that I devoted my career to writing them out beautifully. I am still coming to grips with all the time I gave to this, joyous as it was, by giving up writing my own words.

In truth I thought perhaps by sharing these quotes and photos I might establish some new connections with the fabled writing community on Instagram. Instead I renewed a connection with my younger self, the girl whose loneliness sent her to books in the first place, the young woman whose frustration that her writing dream had to wait was amplified by a dismissive professor who frankly discouraged her from even imagining such a thing.

My loyal community of writers exists by the sharing of words across time and space between the pages of a book, or in an ebook on the glowing screen of my iPad, or in the rich resource of essays that entices me in the ethers.

This was how I discovered a writer new to me, Melissa Febos. First I read her essay on personal writing that spoke profoundly to my longstanding predicament of discouragement with that form. That led me to her book of craft essays, Body Work. This was soon followed by her memoir in essays, Girlhood, 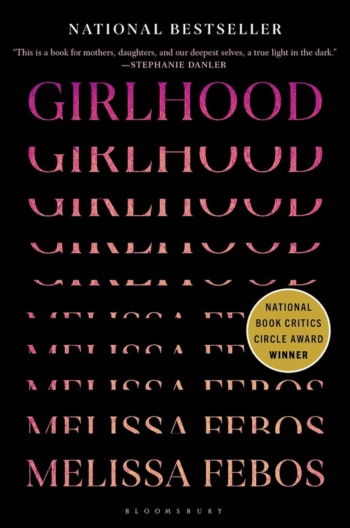 which I hugged to myself in recognition and copiously highlighted (possibly my favorite thing about ebooks, for I will never mark a page in a physical book again). Girlhood has proven to be my long-awaited answer to Joyce’s book, offering me a more accurate description of my life as a girl and a woman who writes to understand herself and others.

Melissa Febos is a generous and honest author, well aware of the communion between writers. She speaks to it in her opening:

It is in part by writing this book that I have corrected the story of my own girlhood and found ways to recover myself. I have found company in the stories of other women, and the revelation of all our ordinariness has itself been curative. Writing has always been a way to reconcile my lived experience with the narratives available to describe it (or lack thereof). My hope is that these essays do some of that work for you, too.
-Melissa Febos, Author’s Note, Girlhood

Still, I will always return to my old friends, the ones who never fail me and will hold my hand during rugged times. Ursula K. LeGuin, a very wise woman and dear teacher, is one. 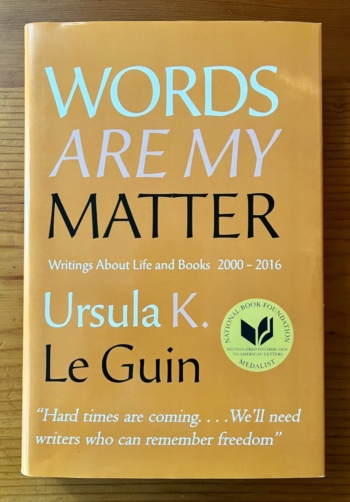 Home, imagined, comes to be. It is real, realer than any other place, but you can’t get to it unless your people show you how to imagine it—whoever your people are. They may not be your relatives. They may never have spoken your language. They may have been dead for a thousand years. They may be nothing but words printed on paper, ghosts of voices, shadows of minds. But they can guide you home. They are your human community. All of us have to learn how to invent our lives, make them up, imagine them. We need to be taught these skills; we need guides to show us how. Without them, our lives get made up for us by other people.

-Ursula K. LeGuin, “The Operating Instructions,” a talk given at a meeting of Oregon Literary Arts in 2002, published in Words Are My Matter

I do hope to share some of those writerly quotes with you during the harvest season we have entered here at Lammastide. For now though, I must get back to the work of rewriting the opening pages of my book, for the hundredth time (or so it feels). Writing here, figuring out what I want to say with as much clarity and precision as I can muster, is my small way of adding my own ray of light to the enduring exchange between writers and readers.