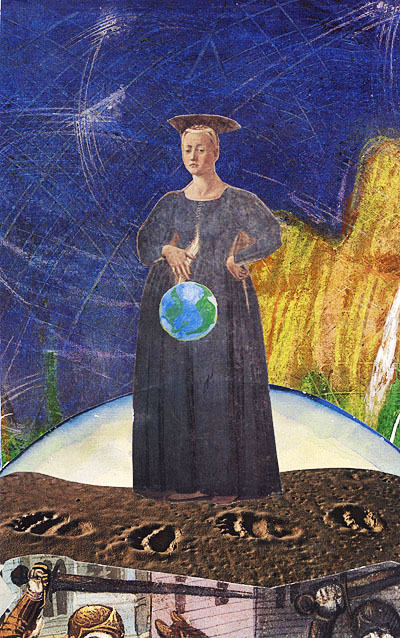 For the New Year of 2010 I promised myself a day “out of time” to play at a Soul Collage-type afternoon offered by my book group, Bay Area Book Artists. I have done collage before and find it a wonderful medium for opening the eyes to layouts and forms, but have not ever attempted the technique in a deeper way, and doing it at the beginning of a new year gave it a little extra juice.

When I have done collage before I have always liked to include bits of calligraphy done for practice but this time we were bidden NOT to use any words but stay only with images. Images bypass the critical mind and come from and go to a deeper place within us. To snip out these images from magazines and old calendars and arrange, rearrange and finally glue them down onto a card was surprisingly satisfying. I never could fully get my mind to go quiet or not enter into the planning of this collage, but I was still a little surprised by the outcome.

The central image is by the Renaissance painter Piero della Francesca and is called Madonna del Parto. I found her in an old Smithsonian magazine, and was attracted to the wonderful, very pregnant Virgin with loosened dress lacings. A line began repeating in my deeper mind from a poem I wrote in 1973, “to mother the earth.” The Madonna del Parto is often shown holding a book over her pregnant belly to symbolize her birthing the “Word”, but my belief is that she births our “World”, our earth-consciousness, so that we may not destroy our home. The footsteps in the sand may be taken in different ways, but my son tells me they are the footsteps of a quadruped that is only partly so, like an ape, a bear, or an early human: perhaps our animal nature, perhaps our ancestors, those who went before and are now part of Earth. The Mother stands on the globe that she simultaneously gives birth to, over and over again, every year at this darkest time. Her power and compassion can overcome the infernal sword-fighting seen at the bottom. May our Beautiful Mother’s presence bring peace to all the nations of Earth, which is our first and last Mother.

Previous post: A Blue Moon and a New Year