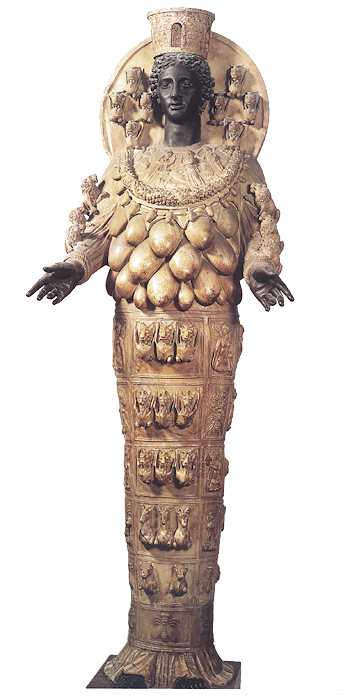 This image has strange and powerful magic. In honor of the full moon, today I honor Diana of Ephesus, a powerful goddess of classical times whose roots are very ancient, and who later, thanks to Leland’s Aradia, has come down through history to us as Queen of the Witches. Her many breasts, the lions climbing her arms, the bulls, bees, deer, antelope and other beasts in her skirt and lunar halo, her blackened face and hands, the kind expression on her intelligent face and open hands; this goddess is fierce and feminine. She opens her hands out to bestow beneficence and sustenance on all. Diana was virgin in the ancient sense of the word, complete unto herself. The goddess tradition that is most strongly and exclusively feminine is called Dianic.

Diana’s temple at Ephesus was for centuries one of the seven wonders of the ancient world, and was founded by Amazons. Diana was the goddess of all wildness. She contains all the animals within her, and is both mistress and huntress of animals. The Homeric Hymns to the Great Mother says, “The giving of life itself, the taking of it back.” Diana is her Roman name; before that she was Artemis to the Greeks. Her temple in Ephesus also puts her in the area where Cybele, the Magna Mater of Rome, came from deep in Anatolia (modern-day Turkey) with her “savage” ways; the towered crown was Cybele’s and her lions go all the way back to the Neolithic Birth Goddess of Catal Hayak. 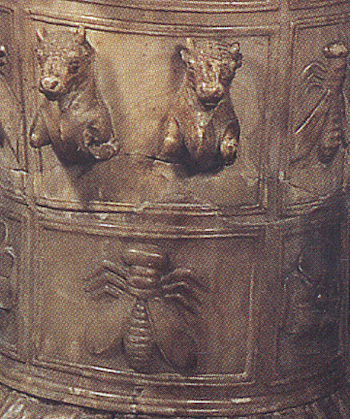 Her black skin seems ancestral to the many Black Madonnas across Europe in later times. Legend has it that the Christian Mary lived her last days at Ephesus, and it was here in the early centuries of Christianity that Mary was given the title of “Mother of God” and the old temple of Diana became hers.

Body wisdom: My animal nature. The mystery of sacrifice in the cycle of birth, nurturing, death, rebirth. During my standing qigong practice, a posture of rest and comfort. Holding my hands out, giving and receiving elemental energy.