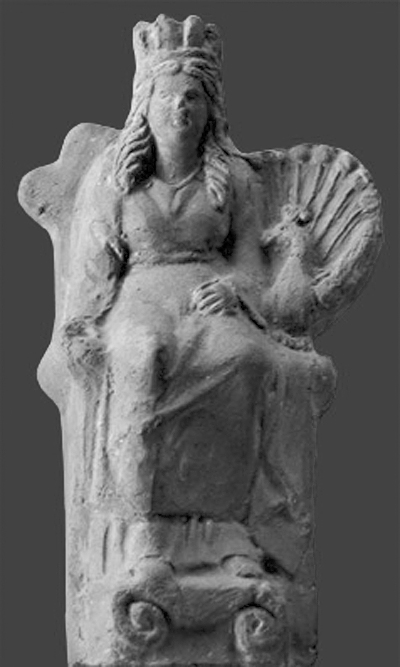 I have been thinking for a while about offering a Moonday School, a place where girls and boys could learn about the ancient images of the Divine Feminine. Like Sunday school, but not. In my post Goddess in the Bible, I invited women and the men who love them to join our circles where they would find “images of female divinity that are powerful and loving.” I’ve decided to post some of these images, ones that inspire me and are images for meditation during my daily sacred practices.

In honor of June, today I begin with Juno, the ancient Roman mother goddess, protector of women in marriage and childbirth, whose festivals Matronalia and Nonae Caprotinae were celebrated by women. The month of June is named for her, and has for this reason long been considered the best month to marry. Juno was honored in many temples under many names; her countless domains were complex and deeply powerful: Juno Fortuna, Juno Sospita, Juno Regina, Juno Lucina, Juno Moneta, Juno Martialis, Juno Caprotina, Juno Februa, Juno Populonia, Juno Seispitei, Blessed Virgin Juno. Her origins are very old, with roots in an older Etruscan goddess Uni, overlaid with attributes of the Greek Goddess Hera, but the peacock which is her symbol puts her in direct line back to the Neolithic Bird Goddesses. As a man’s intelligent soul was known as his genius, a woman’s soul was known as her juno, her own living embodiment of female power.

Juno is our queen, the most important
of the goddesses, the one who holds
the golden staff of sovereignty.
She is the light each child beholds
at birth; she is the mother who gives birth.
At her command girls are made safe
from the labors of childbed, in this way:
an old man sacrifices a male goat;
and from the goatskins, strips are cut;
and those strips are used to strike
the backs of fertile girls, a magic charm
to make them safe and their children safe.

This statue of Juno in the British Museum is from Tunis, which was part of the Roman empire at that time. She wears a crown, sits on a throne, holds a libation bowl and her sacred peacock.

Body wisdom: Sit tall like a queen. Keep a straight spine to support a crown. And listen to my inner juno, my own soul and woman’s wisdom.

As we approach the summer solstice, I’ll be posting images of goddesses going far back into herstory. Juno seems uniquely situated to look forward and backward in time, though that particular skill was attributed to another Roman goddess, Janus. After Juno, the great mother goddess became more hidden in our western culture. I could call this series “Goddess Before the Bible.” She may be forgotten by many, but She is not gone. She rises up in my body, heart and mind.