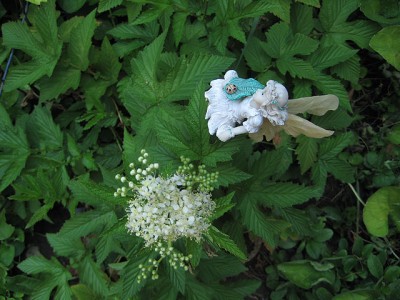 My ancestral English heart is so delighted with the appearance of two blooms on my small meadowsweet plant. I have been nursing this plant along for years, in a couple of different locations. I grew it originally from seed, so am sure it’s the English meadowsweet, filipendula ulmaria. Every summer I try to keep its roots wet in our semi-arid desert. I added this fairy to the meadowsweet’s location, as a marker against being trampled. This plant’s folk names are Bridewort and Queen of the Meadow, and its mythical history is rich. From the ancient Welsh tales in The Mabinogion comes this passage:

“‘Let us use our magic and enchantments to conjure up a woman out of flowers.’ Math and Gwydyon took the flowers of oak and broom and meadowsweet and from these conjured up the loveliest and most beautiful maiden anyone had ever seen.  And she was baptised – in the way they baptised people at that time – and she was named Blodeuwedd, ‘Face of Flowers’.” Bloduewedd was eventually turned into an owl, and the Welsh word for owl is still this word, which means “Flower Face.” And the stories go on.

Meadowsweet is a medicine plant as well as a magical one. Its healing component is salicylic acid, the original source of aspirin. I haven’t managed to grow enough of it to try and make my own medicine, but it makes my  heart light to see it bloom in its little corner of well-watered shade in the high hot summer of California.