The double spiral is a form I have returned to again and again. When casting about for a form to represent the lyrics for “Let Union Be in All Our Hearts,” I finally opened the flat files and pulled out my old folder of spiral templates. It felt a bit like coming home. I briefly considered using a single spiral, but once I lettered into the center I was stuck there. So I returned to my beloved double spiral for its movement, into and then out of the center. 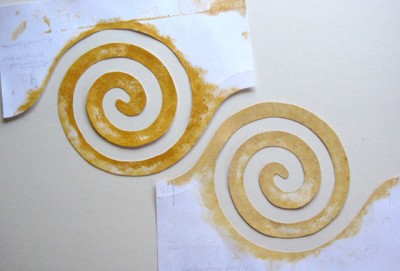 I drew the spiral freehand on Bristol board, making marks along the way with dividers to keep the curves equidistant, and then cut it apart to make two stencils. I decided to use the top stencil for this painting, so the “entrance” for the lettering would begin on the left. 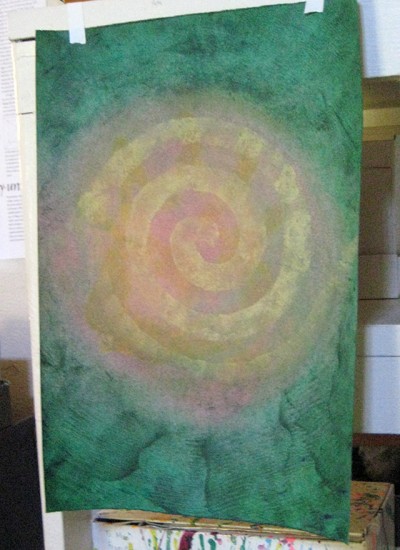 After settling on the spiral form I made several paintings using acrylic pigment and wheat paste. I liked this one because I put a couple of handprints of darker yellow paste in one of the underlayers. Hand over hand, they are not really visible but add to the feeling of a rayed center. Then I daubed the light yellow paste over the spiral stencil with a sponge. 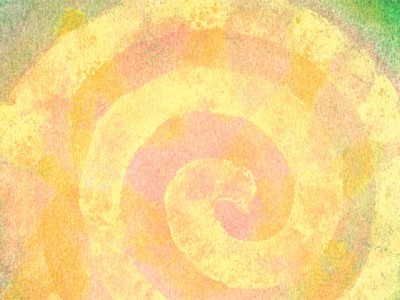 The painting was pretty dark, so I scanned it into Photoshop and played with Levels to really make it pop, giving me the kind of excitement I wanted for this design. 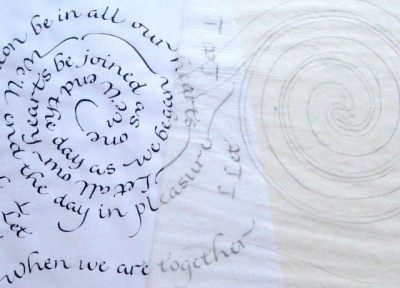 After settling on the final art, I made a tracing of the spiral and penciled in a writing line so the lettering would be pleasingly distributed in the design. Then, I made many lettering trials, playing with size and spacing. The final lettering was scanned into the computer, adjusted to be graphically black and white, the background dropped out and the lettering colored a dark green in the final art. I have used this technique quite often since I learned it, to make art for reproduction. It takes the sting out of writing on the painting and lets me make adjustments as needed. In this case, very little of the original lettering was scrapped; substituting “better” lettering would have thrown off the spacing.

Some of my trials are shown below. The two papers in the middle were experiments made by putting a spiral template underneath the paper and rubbing over it with pigmented paste. 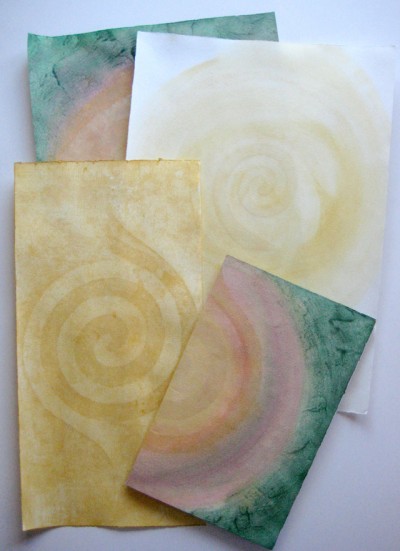 I used one of the rejects to make a wrapper for a signature in my traditional journal, for a nice reminder of my work while writing in these blank pages. As you can see I like to note the phases of the moon. The cross hatch I use to designate the dark of the moon is something I picked up from a medieval manuscript illumination.

The final art for the greeting card, with purchase information here: 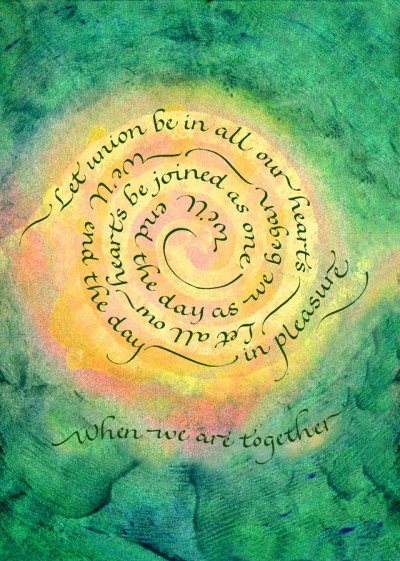 Previous post: Let Union Be in All Our Hearts