Lughnasa, and the Cailleach 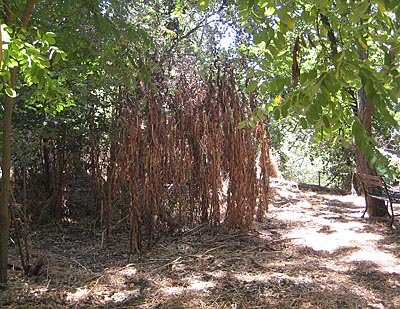 The summer wanes, though in many places in the northern hemisphere it seems high summer still. But the days grow shorter, and there is a tinge of autumn in the air, especially in the early morning chill here in California. The wheel turns on the cross-quarter day of Lammas, or Lughnasa, coming midway between the summer solstice and fall equinox. It is the first of the three harvest festivals on the wheel, and in the old Celtic calendar, the true beginning of autumn.

Those of us who grow gardens are reveling in their abundance, and fruit and vegetables are hanging heavy on the vine. It is time to think of what has come to fruition in our lives, from seeds planted in the hopeful waxing light of spring and early summer, or even all the way back to winter solstice, when seeds planted in the darkest time may be bearing their fruit now.

We don’t grow grain, but in my creekside backyard is a stand of milk thistle, a prickly weed which produces a powerful medicine for the liver in its seed, silymarin. In the green world of the backyard, this crop of thistle stands dry and withered, its leaves rustling in my ear as I practice my daily qigong in my wild place. Though it looks dead, still it holds the seeds of next year’s growth.

In Ireland, the custom of the grain harvesters was to form a circle and, using scythes to cut the grain, work from the outer edge of the field in, until the last stand of grain was left in the center. This was bound around the middle, and ceremonially cut, either by blindfolded women or the youngest worker. The last sheaves of bound grain stood for the Cailleach, the Old Hag. Sometimes dressed as an old woman, she hung in the house or barn until replaced by next year’s sheaf. Sometimes her dried straw was used to fashion the Brighid’s Cross of Imbolc in February, a symbol of youth springing up from age. *

The old festival of Lughnasa was one of the only old pagan festivals the christian church didn’t absorb. Lugh is referred to as the sun king in a chant that laments: This is the wake of Lugh, the sun king; and, Why must the clouds come to darken the sky? The old folk song John Barleycorn references this act of sacrifice also:
They hired men with their scythes so sharp
To cut him off at the knee;
They rolled him and tied him around the waist,
And served him barbarously.

In the midst of any harvest, there is an element of sacrifice. Something must die for something new to grow. It has always been thus, and our ancestors who celebrated the old agricultural calendar understood this well. Today many of us don’t like to think of this, but the undertone of death is heard even in the midst of great growth and abundance. But Nature, the great renewer, goes around and around, in the endless cycles of birth, death and rebirth. If we stand still and listen, we can hear the lessons our Mother the Earth has to teach us.

* Thanks to Patricia Monaghan’s book The Red-Haired Girl from the Bog for this lore.