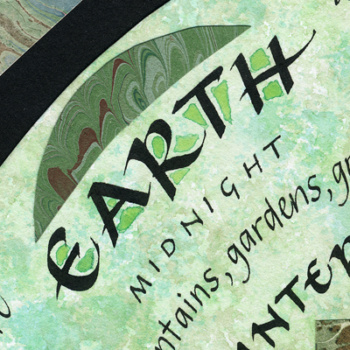 When I was a little girl, but old enough to behave well, my mother would take me with her to prepare the flowers for the altar at church. We would go early, leaving my younger sister either with my father or with the other children in the Sunday School room downstairs. I was perhaps as young as seven, because I remember looking up at the towering vases as they filled with blooms and greens. These would attend the service, adorning the white marble altar in front of the great carved wooden screen which stretched up to the stained glass windows above, at Trinity Episcopal in downtown Columbus, Ohio.

The sacristy was a carpeted room off to the left of the altar, with closets full of cassocks and embroidered hangings, drawers of linens and lace vestments, and shelves full of urns, vases, incense burners, and polished silver and brass, candleholders and vessels. In the center of the room was a big table with piles of fresh flowers. So sweet did the room smell in the early Sunday mornings that I was in a trance of fragrance. I would smell and smell and my small self would swoon a little. The names too were enchanting. I loved the tall lushly blossomed “glads,” for that is how they made me feel, and the name from a storybook, Queen Anne’s lace. And there were lilies, and mums, carnations, ferny greens, ivy, lilacs in spring, and most precious of all, roses. My mother’s first name was Rose, which later became Rosemary, and she was called Rosie. She sometimes wished that she could take a cutting from a rose bush and stick it in the ground to grow a new bush, as her mother did, but that was not her skill. Her gift was instead the alchemy of taking whatever was before her and making a beautiful arrangement of it.

Thirty years later, when she left this world to join the next one, I was shocked with grieving. No number of tears would ease it; no poetry or wise words or hugging comfort would help it. Finally, without knowing quite why, I began to build an altar on the flat top of the wood stove at our kitchen hearth. We had stopped building fires in it when my own little girl was born six years before, and it had sat idle, gathering dust and stuff. I cleared it off, lit a candle and began bringing the outside in. Twigs, cones, seed pods, leaves, rocks, shells, driftwood, feathers, and flowers. The deodar cedar next door produced cones that were shaped just like roses, and these had a place of honor, lining the apron of the stove. I found a tiny photo of my mom with a mobile angel floating above her head. She looked happy and relaxed, with her open-hearted smile rather than her stage one. I tended this altar every day, lighting the candle every morning, replenishing the greens and flowers as they faded and dried. As the seasons rolled on, the decoration of the altar changed too, from the red rose hips and California live oak acorns of the fall equinox when she died, to the evergreen boughs of Yule, flowering branches in early spring, daffodils and lilacs and roses as spring unfurled, sunflowers and zinnias and snapdragons in summer, and around again to gourds and bright leaves in the fall. My altar is always changing, for the seasons go and come and go again. Over the years more things have come to live there: antlers, figurines of birds and animals, a revolving display of tiny framed pictures, small vessels for sacred water, bells for wind, and many candles. I lettered and painted a wheel of the year to hang above, and turn it with the seasons. But when I began, I had no language for what I was doing. I only knew that by tending this altar, I had a place to put my tears and my memories, a place to talk to my mother and hold my hurting heart while my hands moved and arranged and decorated my hearth space. It felt right to bring these emblems of earth into my house and make a beautiful place with them.

In the vast and soaring Gothic stone sanctuary of my childhood church, I was awed by the colored light through the windows, and the sound of the massive organ thundering forth hymns from the upper recesses. But being in the sacristy is my sweetest memory, among the women of the altar guild who performed the ministry of polishing, cleaning, laundering, ironing, caring for the items of the altar, and arranging the flowers. It was the first place I knew the natural world as holy, and became the inner sanctum that I have returned to again and again, a ground from which to heal and praise.