The Making of Star Spell 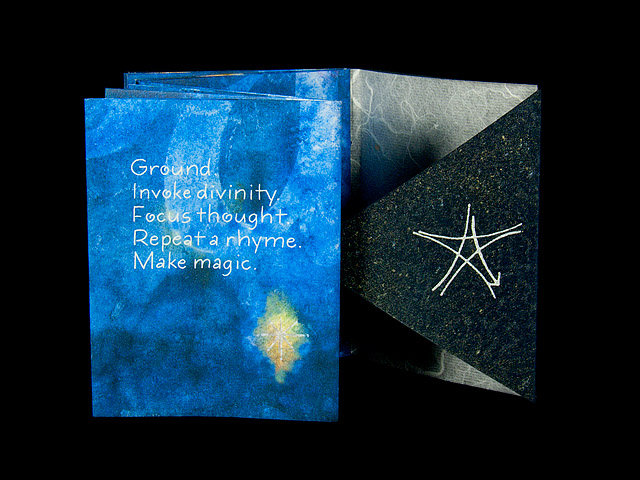 In 2007 I published my second limited edition book, Star Spell. I have been fortunate to find homes for many of my unique books, but they are generally too expensive for most people, so a limited edition makes my work accessible to a larger audience.

The idea for Star Spell grew out of an assignment in my calligraphy study group: to make a piece of calligraphy about wishes. I chose the nursery rhyme “Star light, Star bright” because it is familiar and also fulfills the basic definition of a spell. I have been working with the idea of spells and spelling in my art for several years.

I wanted to try a new folded structure, a double French-fold accordion book. On a single sheet of Zerkall book paper cut in half lengthwise, I lettered the words STAR SPELL in large caps using masking fluid in a split Coit pen, then painted the night sky with watercolor. After removing the resist, I painted the sheet again. At the time I also made a second painting on the other long sheet, in case the first one didn’t turn out, but this time used the masking fluid in a flat brush. After the painting was finished, I folded the paper into the book form. I lettered the words of the nursery rhyme on each page, gilded some stars, and completed the original book, which has now gone to a private collector.

To reproduce my first limited edition, The First Writing, I had scanned and reproduced the lettered, painted pages of the original manuscript book. However, for Star Spell, my increased knowledge of Photoshop encouraged me to venture into the world of compositing. I decided to produce the limited edition of Star Spell with the second watercolor painting. To begin, I scanned the painting into Photoshop in several pieces, and then “stitched” them together to form the continuous piece of art, as my scanner is only letter size. 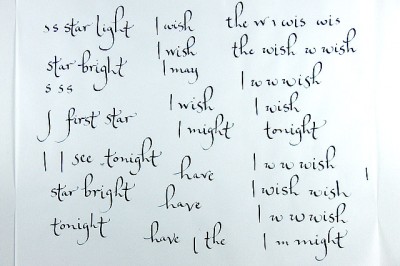 I lettered the text in black ink on a smooth white paper and then scanned the lettering into Photoshop. There I chose the best-looking text and cleaned it up. This does not mean that I changed the lettering in any fundamental way, but just filled in areas that were a bit too light and smoothed a few rough edges. Then I converted the lettering to white, and pasted it as its own layer on top of the watercolor background in Photoshop. I tried several different lettering sizes and made test prints to determine the right size. This meant completely folding each book proof to see how the lettering looked on each page. If so, the entire layer needed to be resized so that the lettering would all be the same size. 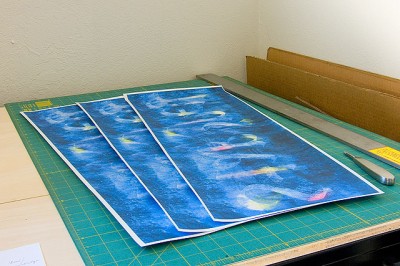 I printed the book on my Epson 2200 inkjet printer with archival inks, which are lightfast and waterproof, so longevity is assured. My prototype book was printed on only one side. Many book artists design editions to be printed on one side only, to avoid the problem of shifting registration (getting the front and back sides to match up) on desktop printers. A book dealer advised me that the glimpse of white on the reverse side of the paper interrupted the feel of the night sky while turning the pages, so I decided to print the back side as well. For this I took the watercolor background, flipped it in Photoshop and made a new file, about 10% larger than the front artwork. This allowed me to trim the four edges of the front print, without fear of the white edges of the back still showing after the trim. It also allows the front and back paintings to be seen as slightly offset from each other when the opened-out pages are held up to the light. The ghost image showing through from the other side adds to the magical feeling of the night sky. The reverse print shows in the photo of multiples prints drying . 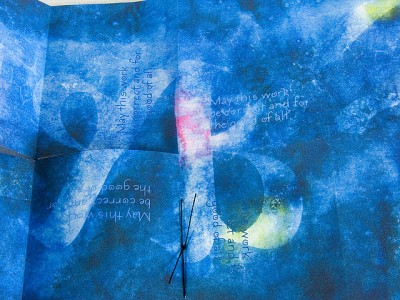 Having a reverse side let me hide some extra words inside near the binding of the book, echoing the idea of binding a spell (making sure it is used only for good). 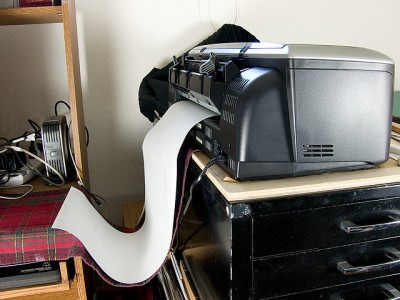 After several trials with different papers, I decided to print on Zerkall Book Paper, smooth, 100 gsm, the lightest weight for the easiest folding. This is the same paper that I used for the original book, and it has a nice soft feel. It is a lightweight paper with little show-through. Feeding the long paper into the printer was problematic without denting it, so I fashioned a fabric “pocket” from a long table runner to hold the paper before it fed into the printer. My office is very small so the printer lives up against a variety of other objects. Each page was hand-fed into the printer, twice for each book to print front and back.

Each book after being printed had to be trimmed as the printed color did not go out to the edge. Making sure to trim on the square for trouble-free folding was an exacting and tedious process, but necessary for the book to fold correctly. The first fold was the lengthwise fold and went against the paper grain, so I scored it against a long straightedge to assist in the folding process. The score had to be exactly centered or it would show on the finished pages. 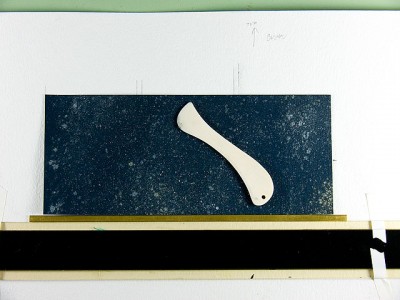 I decided that the book needed a deluxe version, so the first thirteen of the edition were gilded with palladium leaf, and a slipcase made. Gilding the star for each cover of the deluxe edition presented its own challenges. I was gilding on a fairly textured surface so the base either sank into the paper or showed too much of a ragged edge. I finally settled on a thinned PVA fed through a standard ruling pen (one of my favorite tools for thin lines and freehand flourishes). The interior pages also have a few gilded stars which were much easier to lay. I then gilded with palladium leaf. The standard version has its stars drawn with Dr. Martin’s iridescent silver calligraphy ink, a nice dense metallic ink that catches the light nicely and flows well through the ruling pen after being thinned with a little water.

The slipcases for the deluxe version are made from 90# Arches hot press watercolor paper, painted with a silver watercolor which was then lifted off (“blotted” with a paper towel to give a textured look). It would have made more sense to use a silver acrylic, but the watercolor gave a better silver color. So I sprayed the painted papers lightly with Krylon matte finish spray to fix the watercolor before folding and gluing them. 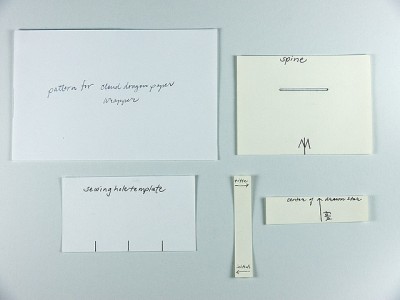 The last photo in this gallery show the jigs and templates I used in assembling the books to speed the process, for scoring, poking holes for the stitching, cutting the slit for the front cover point, where to start the spine lettering, where to draw the cover star, and the size for the endpaper.

Once all of the trials were made and the design decisions finalized, the production began to go much more quickly. I wanted Star Spell to be published and announced on my 54th birthday, since most of the work had happened during the year following my 53rd birthday and I had chosen the edition size based on my age. This meant that I was working with a deadline of my own making, but it also meant the project got done instead of languishing in a neverending limbo of decision making. The manufacturing of the books (from Latin manu factus, literally, made by hand) has been very time consuming, but the advantage of being able to oversee the production of the book from beginning to end has been well worth it.

For photos of the finished book, go to the Gallery page for Star Spell.

(Originally published in 2008 for the calligraphy and book arts journal Bound and Lettered., issue 7.1) 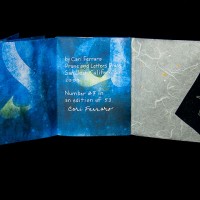 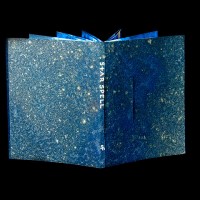 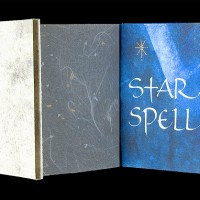 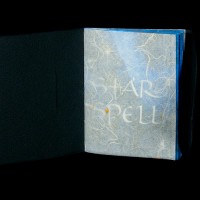 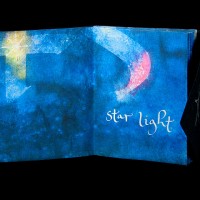 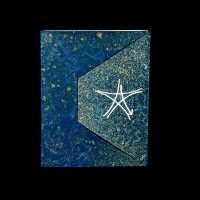 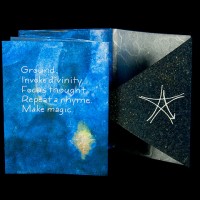 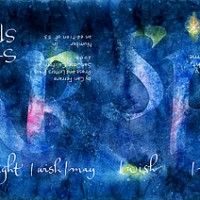 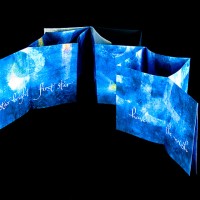 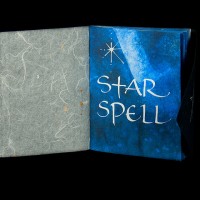