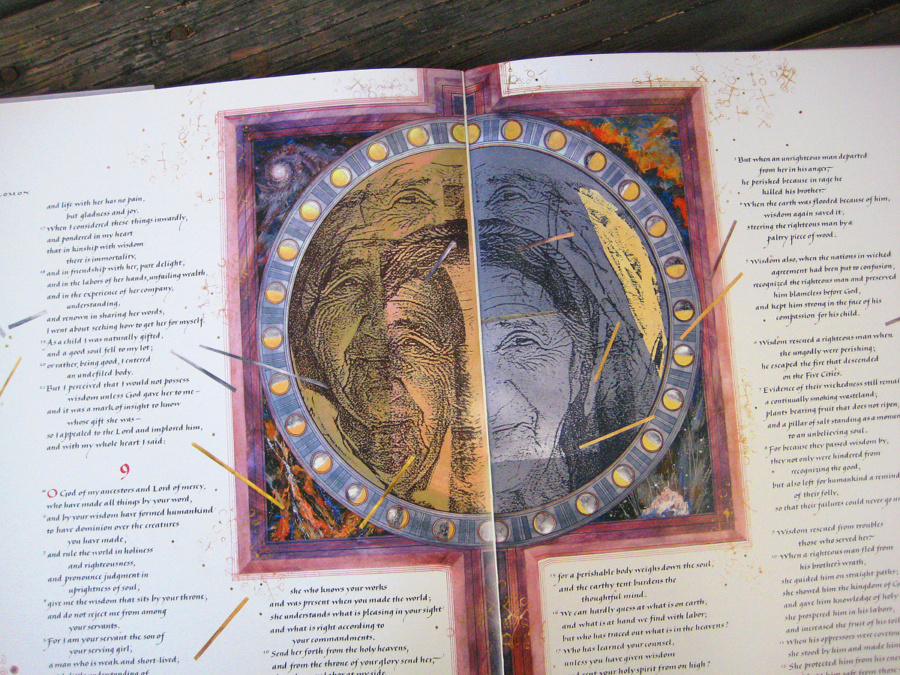 published in Alphabet, the journal of the Friends of Calligraphy, Summer 2009

This image of Wisdom as seen in a hand mirror has an astonishing effect on me: when I look at it I see myself in these pages. As my Cherokee friend said when she saw it, “It’s the Grandmother!” The revolutionary thing about this image of an old woman, framed by phases of the moon, is that it appears in a Bible. She is illustrating Wisdom as a manifestation of the Divine Feminine, as She appears in parts of the Old Testament. I capitalize all of these words as a mark of respect, and could wish that the words Wisdom and She were also capitalized in the book as I have written them here, but they are not, because this book is a Catholic Bible.

The book is the Saint John’s Bible, a project being sponsored by Saint John’s Abbey and University in Collegeville, Minnesota. Under the direction of Donald Jackson, scribe to the Queen of England, a team of calligraphers and illuminators is creating a seven-volume handwritten and illuminated Bible, essentially for the first time since the invention of the printing press. Combining medieval methods with modern page layout techniques, the project is monumental in size and scope.

In March, I went with some scribe friends to see one volume of the Heritage Edition in the Santa Clara University special collections library. This edition, limited to 360 copies, is reproduced at actual size and uses foil stamping to represent the gilding that is on the original manuscript. Its size is quite impressive: two by three feet when opened. The volume that I saw is called Wisdom Books, and includes some books that at one time or another were considered Apocrypha, the “hidden away” books of the Bible, or those outside the canon.

The Saint John’s Bible project has caused great excitement in the calligraphy community for the last ten years. I’ve been fortunate to see some of the original pages at a calligraphy conference, and to have studied with its only (at that time) female illuminator, Suzanne Moore. So I have had a special interest in this manuscript.

My visit to this book was reverent, but not in the usual way. This holy book is not mine. My relationship with the religion of my fathers is problematic. The text is tough for me to read: there are heinous things written about women in this book, and I have stayed away from it for many years for exactly this reason. This religion has much to answer for: the pope’s recent statement on the ineffective use of condoms to halt the spread of AIDS in Africa; the priestly pedophile scandals, the utter exclusion of women from the priesthood. I do not have to read far in these books to find language denouncing woman as the source of all sin and death in the world, detailed instructions for how to control wives and daughters, how to whip children, and many many descriptions of God as dominator. I am a Goddess-loving woman, not a God-fearing one. Reading these texts can really make me feel ill. 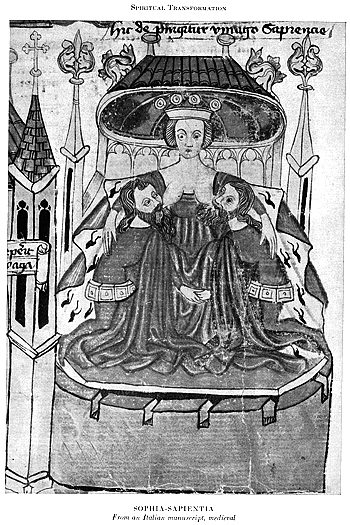 But the images! Images open up the possibility of finding poetry in these texts and have drawn me into reading and discovering traces of the old Goddess worship woven throughout the pages. Wisdom is anciently referred to as feminine: in both Hebrew (Hokhmah) and Greek (Sophia) the gender of the noun is feminine. Sophia, or Sapientia in Latin, was present at the creation of the world, and delights in Her creation. In medieval times She often appeared in alchemical texts, as seen in this illumination showing the bearded patriarchs actually nursing from Her breasts. Historically Goddess was also symbolized by the Tree of Life, which is beautifully shown several ways in the Wisdom Books. Lines of writing in the margins become an image of a graceful tree branch. And though the church fathers tried to reframe the Song of Solomon as a love story between God and his chosen people of Israel, I’m not fooled. This is a beautiful description of the Sacred Marriage, an ancient ritual going back to Egyptian and Babylonian times, when the king of the land and priestess of the Great Mother consecrated the fertility of the land with sacred sex. Yes, this really is erotic poetry! 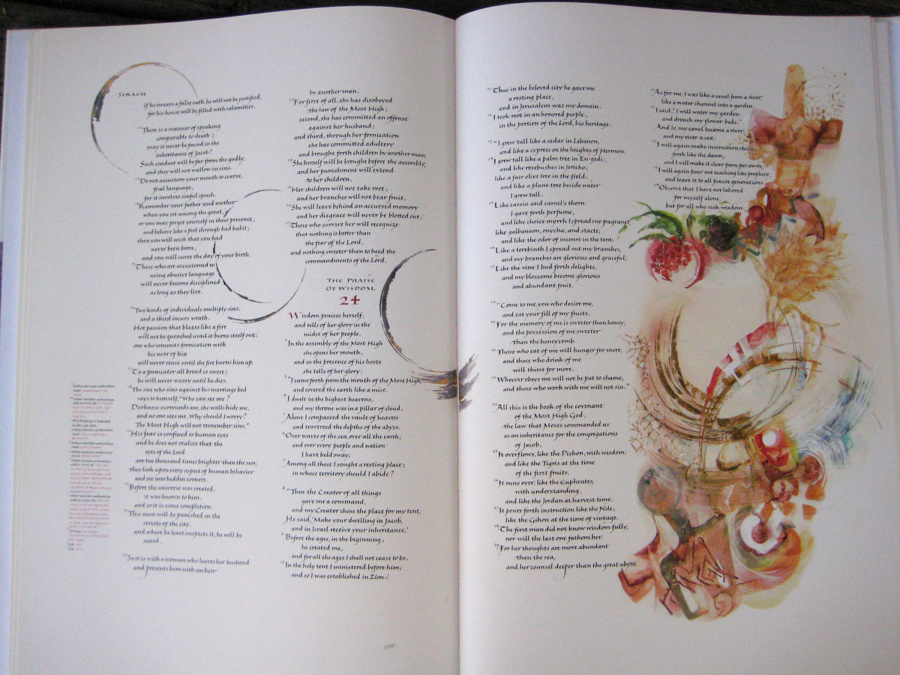 In my favorite image, the moons (gilded in palladium on the original page) drift down diagonally across the page spread and become the communion chalice (itself a very old female symbol), abstractly seen from above. Surrounding it are fruits and bounteous symbols of earth’s abundance, and two ancient goddess images. These clay figurines have been found by the thousands in Old Europe, and many are incised with markings that can only be seen as a kind of writing. They are the source of much of the Danube or Vinca script that has continued to inspire my work for several years, and seeing them represented so lovingly in the Bible has made me feel . . . well, included. Apparently the directive to the illuminators was to make images that had never been seen in the Bible, and this certainly qualifies. 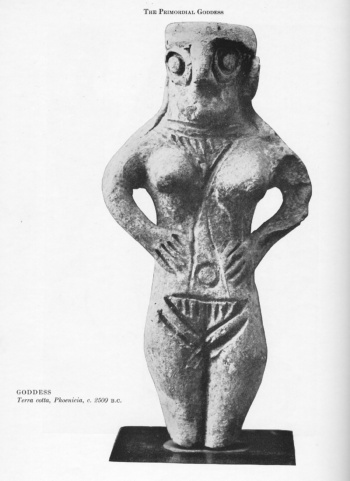 This Phoenician goddess from 2500 BCE was made about a thousand years earlier than the Old Testament writings, but in roughly the same part of the world. Her attitude is not submissive and her emphasized pubic triangle and other markings identify her as a priestess or an early manifestation of Goddess from Bronze Age agrarian cultures that immediately preceded the Iron Age patriarchs.

The inclusiveness of the Saint John’s Bible is a radical thing in the Christian community. These Benedictine monks have been brave to allow such feminine images into the Bible. The Saint John’s Bible Committee on Illumination and Text has aimed for universal, cross-cultural and inclusive language and imagery, and the representation of many spiritual traditions, both ancient and modern. This is accomplished much more successfully through its use of images than through the text. Though they have tried to “employ gender-inclusive language” in a “non-obtrusive manner” the language is still overwhelmingly masculine because of the desire to avoid “altering the passages that reflect the historical situation of ancient patriarchal culture.” 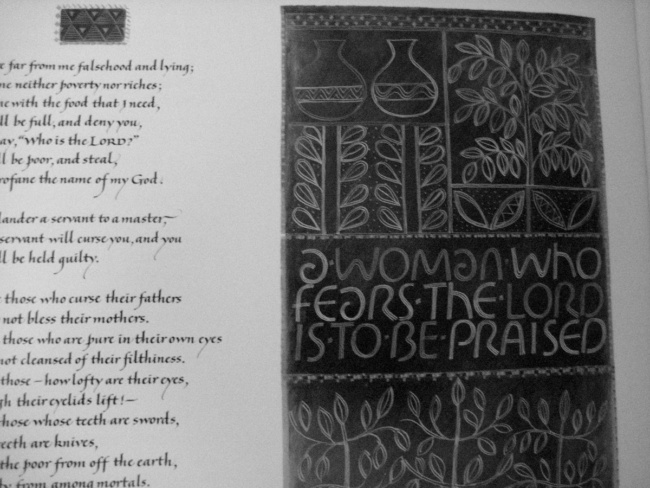 The historical nature of that patriarchal culture is disturbingly still quite current, and there is vehement sentiment in the church against representing feminine divinity in any way, shape or form. This was shown recently by the sudden dismissal of Ruth Kolpack, a “pastoral associate,” who had devoted over thirty years of service to a Catholic church in Madison, Wisconsin. She was summarily dismissed by the bishop who suddenly noticed that her master’s thesis asked the church to become more inclusive, to “free God language from captivity.” In her thesis, she writes of a three-year-old girl’s response to being told God is She: “God is He. God is a word for boys.” She also writes: “The exclusive use of male language for God is idolized as if it is the only way to speak of God. It has become our ‘golden calf’ in public prayer.”

The Bible is made up of images and text together, and just as the illiterate pagans of old were awed by the golden pictures, this modern pagan is most impressed with the images. Because of these images, perhaps this Bible will be about healing and reconciliation, rather than alienation, domination and power. It is a good first step in the right direction. When I see these images I have a very different feeling than I have when God is presented to me as a punishing Father. As one woman commented, “Could this be a Bible that deserves to be studied? That offers hope and love and something more than dogma? Exciting to think so!”

At times I want to invite all the women, and the men who love them, to come and dance in a circle under the full moon with us. I know that some of these people have been awakened and are trying to change the institutions of patriarchal religion from within. This is very difficult, for the punishment can be severe. If they leave their churches and synagogues and mosques, we will welcome them into our circles where they will find images of female divinity that are powerful and loving. As the dancing letters say on the last page of this book: “She is a tree of life to those who lay hold of Her; those who hold Her fast are called happy.” 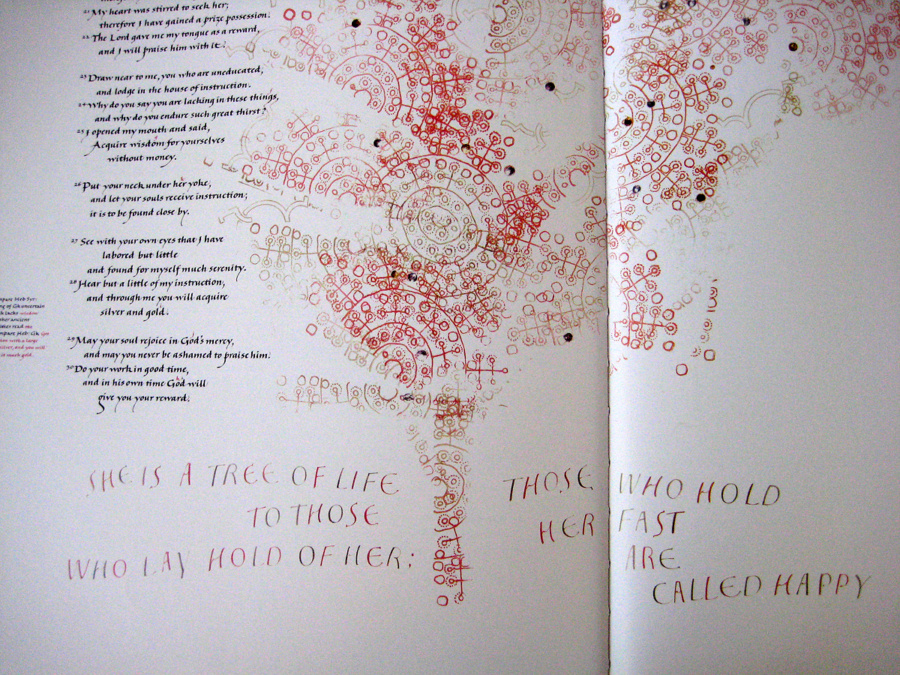 The Library of Congress website, which has some interesting photos of sketches of the work in progress
http://www.loc.gov/exhibits/stjohnsbible/stjohns-exhibit.html

The text of Ruth Kolpack’s thesis calling for inclusive language for God
http://www.scribd.com/doc/13441413/Ruth-Kolpack-Thesis

A very thoughtful article entitled “Why Words Matter” in relation to religion, God and Goddess
http://fullcirclenews.blogspot.com/2007/05/recovering-from-this-culture-why-words.html

My original blog post, with comments from readers
https://cariferraro.com/goddess-in-the-bible/

This essay expanded on the original post with additional images and material. I am grateful to the editor, Judy Detrick, for publishing this unorthodox view of the St. John’s Bible, and particularly to the illuminators Donald Jackson and Suzanne Moore for this lovely new interpretation of the Book of Sirach. The illumination “In Praise of Wisdom” especially draws on the images in Marija Gimbutas’ book The Civilization of the Goddess, reaching much farther back in history than when the Christian Bible was written. It is a joy to see these ancient images in this modern version of the Judeo-Christian holy book.

The published essay ran with this byline:

Cari Ferraro was well brought up in Ohio girl as an Episcopalian. She was recently inspired by the scene in the movie Milk when Sean Penn as Harvey Milk tells a room full of gay people, “You have to come out!” She is glad to be coming out of the broom closet in a San Francisco journal dedicated to the art of calligraphy, whose practitioners are overwhelmingly women.