Work in Progress – An American Girl in Tehran 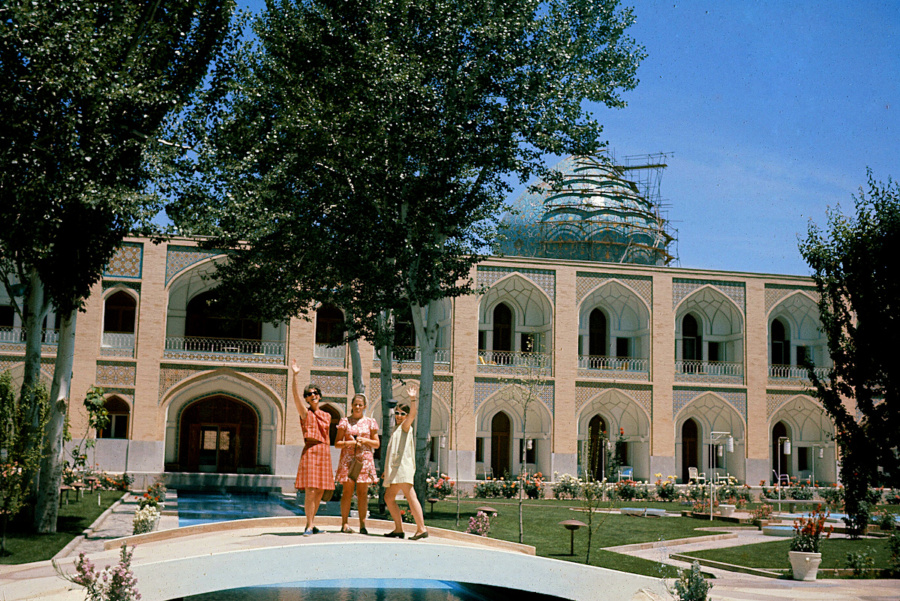 This is an excerpt from my work in progress, about half written as of February 2022. It stands now as the prologue, and will give you a taste of the subject matter of this project. I have been asked for years to write these memories and now I am writing them. As many titles as my first book had, this one has only ever had one, An American Girl in Tehran.

In the photo above my mother and younger sister are practicing their “Shah” waves in front of the Shah Abbas Hotel in Esfahan. I am in the middle, looking clueless, which is a pretty good summation of how I felt most of time I lived there. And wearing a minidress, as were many modern Iranian women at the time, and all the girls from the West. That was only the beginning of the culture shock that was a constant presence during our time there.

I heard a sob and looked over at my sister. “Are you crying?”

“You are too!” She was right, but I was surprised. I had wanted nothing more than to go home to the States since we had landed in Iran nine months ago. Now I was finally going home, my constant wish, home to my friends, my high school, big modern shopping centers, and roads without big gaping ruts.

Mehrabad Airport was busy for being 5:00 in the morning. People were everywhere I looked. Women were shepherding children away from the flow of foot traffic in the corridors, holding their chadors closed with one hand while they shooed their children with the other. Men in dirty dark jackets and baggy pants smiled and waved at their departing relatives, showing their missing teeth in grizzled faces. Modern young Iranian men and women, trying hard to appear Western, walked confidently through the door leading to the plane. Smart-suited pilots and stewardesses pulled their suitcases on little wheeled carts behind them as they strode through the common area, drawing admiring glances from the poorly dressed Iranians standing around in family groups.

We stood in our own little group, saying our goodbyes. I couldn’t help glancing toward the door to see if we were being pursued. I had looked out the back window of the taxi all the way from the Tehran Hilton to Mehrabad airport, expecting to see the flashing red lights of the gendarme coming after us. But all was quiet.

We had gotten the call three weeks ago, instructing my father to pack up and return to his job in Washington. I had been overjoyed at this news, but now I looked at the the dear friends who had come to see us off. Even in my fifteen-year-old haze, it was dawning on me that I would probably never see these people again.

Our Iranian maid Aghdaz had gotten dressed up for the occasion of saying goodbye to us, wearing her best dress, her chador as usual pinned carelessly to the top of her head and hanging behind her. Even Reza, the driver from the company carpool who had been assigned to us, had slicked his hair back and worn a tie.

And big Larry McFarlane was here. The self-appointed hospitality ambassador from Dad’s office, he always came to the airport to greet and say farewell to the families when they arrived or went home. This morning, he made a mock bow to my mother and handed her an airmail envelope bordered by red and blue slashes. On the front was typed, “Jack and Rosie – Open this when you are breathing a sigh of relief on this first day of what, I hope, is going to be a wonderful trip home.”

“Now Jack, you must not let Rosie read this until you are aloft!” His eyes crinkled in anticipation of the good joke that would undoubtedly be inside, and he ran a hand over his bald head as if to congratulate himself.

My dad looked narrowly at Mom and said, “Then you had better give it to me.” Mom made a motion as if to stash it away in her purse, and then sighed and gave it to my dad. She looked away from him and said, “Larry, you’ve been a wonderful friend to us. I hope we see you when we are all stateside again.”

“I wonder if that will ever come for me, I have been here so long! But I promise I will look forward to the day.”

“Hope you get out of here soon, Larry,” said my Dad. “This pisspoor excuse for an airport isn’t our problem anymore.”

“You did your best, Jack. May your next project be more successful than this fiasco!”

He turned to me and my sister and put his palms together as if praying. “Don’t ever forget these days in the beautiful country of Persia.”

We nodded and both promised we wouldn’t.

“Flight 247. Passengers will please board.”

Larry solemnly shook each of our hands. Aghdaz burst into tears and began dabbing her face with her chador. We had never hugged her, but this morning we did. She smelled of cardamon and lemon furniture polish, and she hugged us for all she was worth. She hugged my mother too, but to my father, she said, “Mr. Hoyt, we will see each other again, inshallah. Thank you for this job, and bon voyage!” Of course, Aghdaz would know a little French. Most Iranians did.

I was crying openly now, unashamed of my tears.

“Come on dear,” said my mother. “We’ve got to board.” She wasn’t shedding any tears.

We walked to passport control where a bored-looking official stamped our passports. My father took one last look around the airport he had come to Iran to remodel, his face full of his disgust for the battered walls, the peeling paint, and what he knew was the poor condition of not only the terminal, but the entire airport. But it wasn’t his problem any more, and he turned his back on it all and walked onto the airplane. We followed him, as we always did.

The plane lifted off the ground. I held my breath and closed my eyes, waiting for it to be over. I knew this was the most dangerous part of the flight, taking off, landing. But we lifted above the clouds over Tehran and were in the blue sky that went on forever. I fancied that I could see the curve of the earth beneath us. I finally relaxed, and, I think, so did everyone in our family, though I couldn’t tell for sure. Mom and Dad weren’t saying much.

The plane’s intercom crackled alive in the close air and the pilot’s voice filled the cabin.

“Good morning, ladies and gentlemen. Shalom.” His English was almost perfect, as it would have to be. English had supplanted French now as the international language, as aviation knitted the world together and with it our American ways and language. The sound of his announcement was loud with the roar of the cockpit. He was chatty, as some captains were.

“Welcome to El Al flight number 247. I am Captain Rachamim. We are flying at 35,000 feet and it’s a beautiful day. The weather in Tel Aviv is a pleasant 24 degrees centigrade and we are on schedule to land in two hours and twenty-five minutes. We will be turning off the seatbelt sign and you will be free to move around the cabin. Our lovely stewardesses will be along to offer you some morning refreshment. Settle in and enjoy the flight.”

His voice cut off and the sound of conversation resumed in the cabin. I wondered what kind of adventure awaited us in Tel Aviv.

I looked over at Mom. She was watching the light on the overhead console, and as soon as it winked off she pulled out a cigarette and lit it. “We’re on our way, girls. Free as birds!”

Dad looked out the window and didn’t say anything, but he never did say much. I knew he was glad to be going home too, but it was more complicated for him. His two daughters had made his life pretty miserable with our persistent whining about everything we were missing at home.

He looked over and caught my eye. “You’ll miss it a little bit won’t you, kid?”

“Yeah. There were some good things about it.” This was my concession; I knew I had been obnoxious.

“There were. Hope someday you’ll look back on it all more fondly than you feel now.”

“I’m going to miss the barberi!” my sister said. “With butter!”

“And Masud?” teased my sister. I looked away. I didn’t want my father to see my face. But he was looking out the window again, and it was Mom who looked searchingly at me. She always did see right through me.

“Well, I’m looking forward to plumbing that works and no stinky jubes in the street,” she said.

“Peeyoo.” My sister wrinkled her nose.

And thus began the story.

My mother averted her eyes after her comment, and my father again looked out the window. My sister and I raised our eyebrows at each other and shrugged. She reached for the in-flight magazine, and I pulled my current paperback novel, Exodus, from my bag. We each retreated into our respective shells, and tried to look ahead.

The intercom sounded again, and my father looked up, surprised to be hearing from the captain again so soon.

“Hello again. I have exciting news for you. American astronauts have just landed on the moon!“

Everyone began looking at everyone else, astounded and proud. From first class, a woman’s voice burst out, “God bless America!”

The pilot’s voice continued, “This is a day I am sure you will all remember. The twentieth day of July, 1969.”

He was right about that. It was the day my family escaped from Iran. 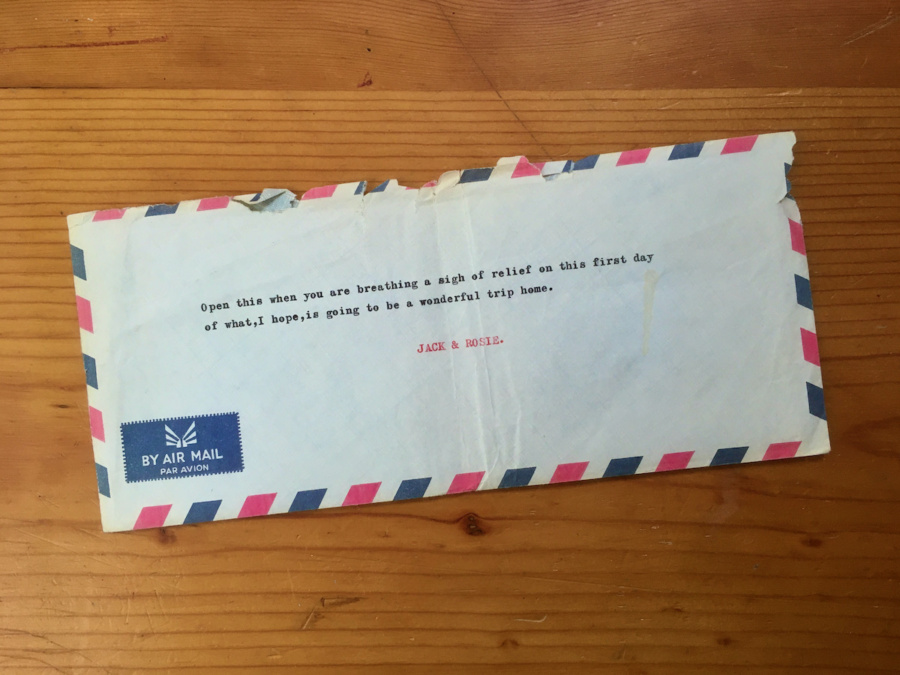 Above is the letter given to my parents the day we left Iran. Inside was indeed a good joke, for Larry had written a poem which began, “This is an Ode to Battling Rosie.” For the rest of the story, you will have to read the book! 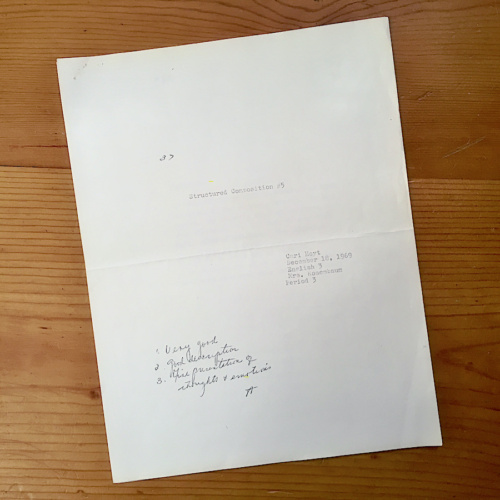 I am ever grateful to Larry for immortalizing our exit from Tehran in his ditty, and to my 11th grade English teacher, Mrs. Rosenbaum, for assigning me “Structured Composition #5” six months later, in which I captured some of these memories for the first time, in 1969. Let it be known my writing style has evolved and I no longer write such things as “My heart wrenched free of its prison.”