Mother Knot – Mary at the Movies 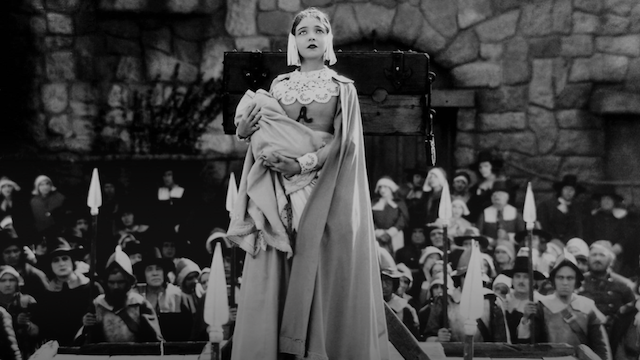 “The End” glowed in curly script letters across the wide screen and then faded into black. The collective quiet broke apart into low voices as the houselights came up, bodies rustling as hands groped under the plush seats for pocketbooks. Light flared into the blue dimness from the back of the theater as people pushed open the swinging doors to the sunny lobby.

In the fourth row Mary sat on a little longer than the rest, dabbing her eyes with her handkerchief. Could there be anything sadder than the heartbreak on the screen? She looked around and saw a few other women, lingering in their seats as she was, composing themselves. She had heard them crying along with her, in the dark theater.

The orchestra began to emerge from their alcove at the left of the screen, talking in low voices to one another. A few silently strode up the aisle to have a quick bite to eat during the break before the evening show. This was a better movie house and had an orchestra rather than a single piano player.

Still Mary lingered, turning over the vivid black-and-white images of the story in her mind. That last scene, when the minister bared his breast and revealed his own scarlet letter, bloodied into his own skin by guilt. Had he cut the A himself? And when the lovers met in the woods, it was so thrilling, with their little girl playing in the creek nearby. She could have swooned. She knew the movie had been made from a book, a book that had been banned for its sinful theme, and she knew very well her mother would find such a book if it came into the house. She had to hide her dime store novels very carefully. But Mary could slip away of an afternoon and see such exciting and lovely stars, moving so assuredly through their brilliant glimmering world. She knew it was just a story, but oh! How it made her feel! It was well worth the extravagance of two dollars to have seen it.

A young man with a broom was making his way through the rows, sweeping up debris and flipping up the cushioned seats. Well, she sighed, it’s so nice and cool in here, but I can’t sit here all afternoon. The heavy red curtains swung slowly across the screen, pulled by invisible hands in the wings in preparation for the next showing,. Reluctantly she stood up, stretching out the kinks, then followed the last stragglers into the lobby, pausing to look at the posters of coming attractions. Mary loved going to the movies. She could still remember when her parents had taken her and her sister Sarah to the Dreamland nickelodeon to see a Charlie Chaplin movie. They had all laughed in delight at his antics and talked of it for days afterward. A few years later she had been mesmerized by the movie Reckless Youth, with its fantastical tale of an orphan girl running away from home to find a joy ride on “the big roundabout.” She did prefer a light-hearted picture to the sad ones with doomed heroines. She was not sorry, though, not at all, to have seen this one. There was something so beautiful about suffering.

She made her way to the matching glass doors, decorated with graceful arcs and shapes in gleaming stainless steel, like so many of the new buildings rising up in the city of Columbus. The late afternoon sun was pouring into the lobby, so that she didn’t at first see the two boys skipping down the sidewalk and nearly bumped into them. One strummed an imaginary ukulele; they were both giggling and singing “Yes, sir, that’s my baby . . .”
The song lifted her spirits. She smiled and picked it up “ . . . no-o-o sir, don’t mean maybe” humming softly to herself as she strolled down the scorching sidewalk, swinging her beaded blue bag on her wrist, and feeling in her hips the swivel that her favorite screen stars affected, tilting their bobbed heads from side to side and pursing their red bow lips. The movies were full of such girls, sassy lasses who walked with a flounce, who were independent and pretty and wore lovely clothes. She was a modern girl, after all, and not stuck in Puritan New England in bygone times.

She was still lost in thought when she felt the smiling gaze of a man across the street taking her in with his eyes. She looked away, crossing herself rapidly, knowing that if she looked back at him, he would think she was easy. He must think me a perfect fool! A few steps on, she stole a look at him. He merely raised his eyebrows and tipped his straw boater hat. As he walked away, she sighed with relief and thought, At least I’m spared having to say good day to him. She resumed her own modest pace down the sidewalk of State Street, her mother’s voice in her ears. Keep your eyes down. Don’t answer to strangers. She was, her mother often reminded her, well brought up. Her step was that of a tall woman who at one time wished she was smaller, drawing her shoulders down around her height. She felt acutely the decade’s preference for petite women.

At High Street she turned left toward Lazarus Department Store to meet Sarah, who had a proper job as a punch card operator in the downtown store’s accounting department, unlike her older sister who idled her afternoons away at the picture show.

As she crossed the street, she heard her name called and looked up to see her sister coming toward her with a smile.

An excerpt from Mary’s story in my book, Mother Knot. The photo is of Lillian Gish, known popularly in the 1920s as America’s Sweetheart, starring in the controversial 1926 movie she fought to make of the book, The Scarlet Letter, written by Nathaniel Hawthorne, published in 1850. One of the few things I know about my lost grandmother is that she loved the movies and she very likely saw this one. The movie itself caused quite a stir, and the religious authorities were brought into the negotiation process to approve the script. I don’t pretend that Mary was as glamorous as Lillian Gish in this photo, with her blood red lipstick, but I am sure she would have aspired to be so.