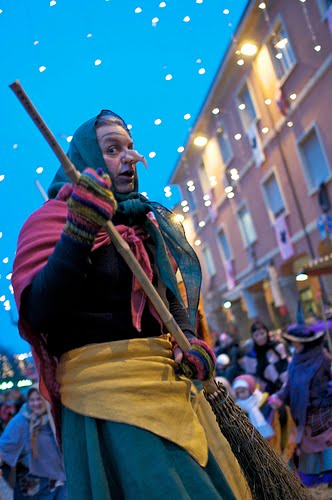 Leave it to the Italians to keep the old ways around in the form of a broom-riding, gift-bringing witch at Christmastime. In parts of Italy, children know the story of La Befana, a “strega” (that would be the Italian word for witch), who was visited by the three Magi a couple of thousand years ago, who were following the star in the East to find the sun child, and invited her along. She wouldn’t leave off her housecleaning to go and see the baby Jesus, and in her remorse later became the Giftbringer, riding down the chimney on her broom and leaving sweets and toys for good children at Epiphany, or a lump of coal, or black candy, if they were bad. Thus she would visit “all the holy children.”

Urbania’s Festa Nazionale Della Befana is a five-day Italian festival in early January that celebrates Befana, and it’s a parade FULL of witches. The photo above was taken by photographer Nico Tranquilli. More photos of the festival can be found by searching Festa Nazionale Della Befanna (try here). Many wonderful pictures of the entire festival, f-f-f-f-filled with w-w-w-w-witches!

Years ago, after my mother died, I found in her things a poem about La Befana. Wish I could find it right now, but it was the first time I’d heard about her. It seems a little funny that an Ohio Irish/German housewife would have saved this story, but something must have rung true to her about it, maybe that she too could fine the Divine if she left off her endless round of housecleaning, cooking and child care. Maybe we need a little of that right now, in our endless hustle and bustle, to leave off our errands for a moment and go out and look at a star.

In anticipation of going to see my local Revels this coming weekend, I’ve searched and found some wonderful video on YouTube of Revels excerpts from all around the country and from many years past. Storytelling and music are time-honored traditions that flourish in the dark time, and there is a gem on YouTube I found of Norah Dooley telling the old story of Befana. This celebration falls on January 6, so I am jumping the date here a little, but this is such a wonderful performance I have to share it. About six minutes, you can spare a little time this busy season for a magical story, can’t you?

Previous post: Looking for the Light on Santa Lucia Day