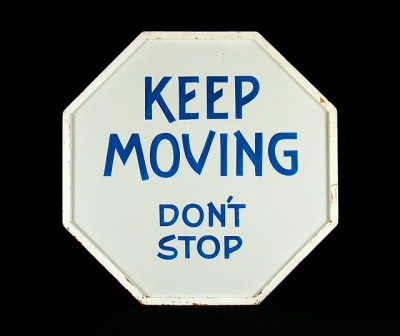 This is an old sign I picked up years ago in an antique shop. It used to be at San Jose’s Frontier Village, now long gone, and was used for crowd control, that is, don’t hold up the line, Keep Moving, Don’t Stop. I bought it as a gift for my husband; at the time we were running his family’s household moving business and it was kind of a joke for him and the movers. We charged by the hour, and of course the shippers (customers) didn’t want to see any lollygagging about. And when my husband was on the job, you can be sure everybody stepped pretty lively to get the job done.

Over the years the sign continued to hang in his office, but after we had gotten out of the moving business and gone on to other things, the sign began to have other meanings for me. It became a kind of mantra, almost Zen-like in its wisdom: Keep Moving meant don’t get stuck in old attitudes or habits; Don’t Stop meant keep the flow going, because, even though you need to rest, if you really stop, well, you’re not alive anymore are you? And sometimes, during rough times, when life’s difficulties seemed overwhelming, it became good advice to see it every day, just keep moving, just put one foot in front of the other, this too shall pass, and tomorrow’s another day. And as I age and have struggled with bouts of disability, it has reminded me that moving my body in whatever way I can has benefits, even if I can’t do what I could when I was younger. I can make adjustments to how I move. If I can’t take a walk, I can still do a standing qigong routine, and if I can’t stand, I can exercise sitting or even lying on the floor. The point is to keep moving, don’t stop, because once you give up, it’s hard to get it back. For me, the bodywork I do every day is a spiritual practice; my body is my home here on earth.

So I’ve always loved this sign, with the octagonal shape of a stop sign but a calmer blue and white than alarm-inducing red. And of course, it’s hand lettered, probably in the 1940s or 1950s, so the letters are irregular and show the hand of the signmaker: that longer right side on the M, the uplift of the middle crossbar on the E’s.

I’ve been meaning to post this for a while. Today I publish it in honor of Jack LaLanne, who just left us at the age of 96, full of roaring good health right to the end of his life. He was a visionary man, way ahead of his time. When I was a kid, he was on TV teaching us how to do jumping jacks (which are named after him), and telling us to avoid eating junk food and instead eat lots of vegetables and fruit. In an interview from last year, when he was 95 years young, he still had his signature pep and vitality. And not only did he counsel getting some form of exercise every day, but he also counseled joy. Joy is the flow too. When we take care of our bodies, our minds will be happier as well as our physical selves. They are all of a piece, so taking a walk will lighten your mood, improve your circulation, and keep you healthy. You don’t need to overdo it, but you do need to Keep Moving, Don’t Stop!