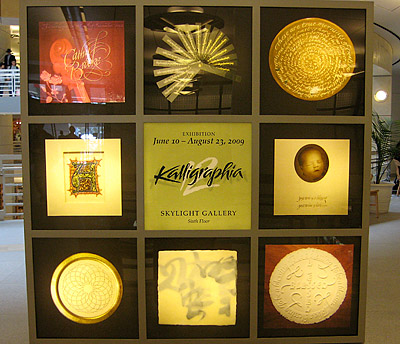 Today I’ll share a look at the wonderful Kalligraphia exhibit at the San Francisco Public Library, which opened June 10 and runs through August 23. Above is the illuminated welcoming panel at the entrance, a sneak peek (love the circles and squares). This triennial non-juried calligraphy exhibit of the Friends of Calligraphy is celebrating its twelfth round, which means it’s been happening for 36 years. It’s always a stimulating collection of modern lettering, and I’m happy to say I’ve participated in the last six exhibitions. This year my Spelling Words book in its black and white incarnation is showing. You can see that on my website, but here are some views of other art I saw. Some of my favorite pieces are not shown simply because I couldn’t get a good photograph of them, including Alan Blackman’s newest in his “Our Father” series, “lettered” entirely from cut up credit cards, and Melissa Titone’s intriguing and complex paper cut saying “There is no big task that cannot be divided into many smaller ones,” a mantra in my studio as I approach any big project.

Most of these photos are detail shots to crop out the overhead lighting reflection on the glass cases, and were chosen for their ability to display at 400 pixels. Captions for the art appear below it. 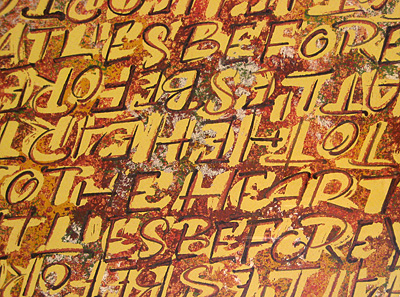 Christine Colasurdo’s layered lettering creates a rich pattern of meaning in “Go to the Heart.” 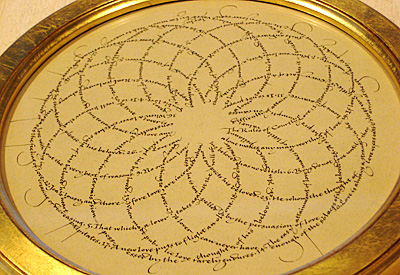 Linnea Lundquist’s breathtakingly tiny lettering in a rosette pattern listing “The Rules of Courtly Love” from a 12th century source, all in a 10-inch frame. 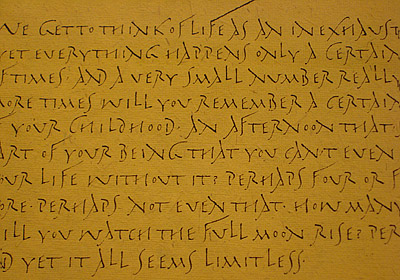 A detail from Judy Detrick’s “Quotation by Paul Bowles” inspired by a first century Roman rustic hand; I love the texture of this writing. 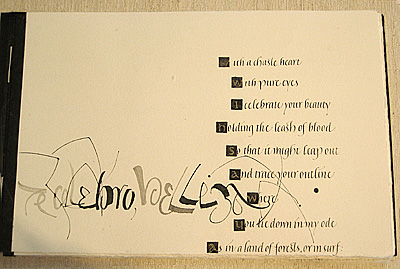 A page from a book of calligraphic studies by Thomas Ingmire, “Calligraphic Testaments,” made in preparation for his collaborative work with Manuel Neri for a book of Pablo Neruda’s poetry. 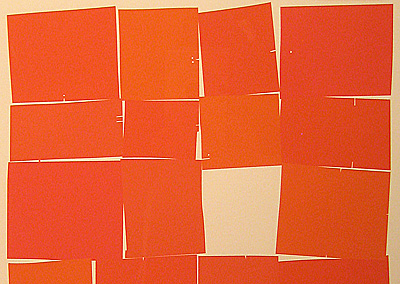 Susan Skarsgard’s very intriguing “No. 17, from Series 26 of 26.” The title should have given this away, but I persisted in seeing this as only an abstract exercise in calligraphic marks made perhaps with a wide wood veneer pen for some reason, until Ward Dunham set me straight by showing me it’s alphabetic character. Duh! See, in the top line, A, B, C, D . . . 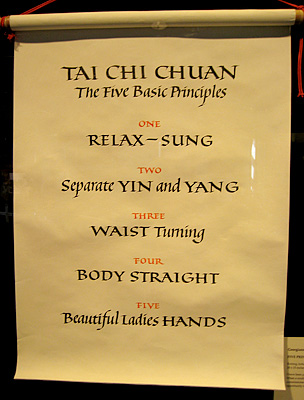 This piece is arguably the most traditional of all the pieces shown, and just might be my favorite. Not only is the presentation simple and beautifully done, in traditional black and red lettering on white paper, but I learned some new body wisdom. Georgianna Greenwood has been studying Tai Chi Chuan since 1982, and her discipline in that practice paired with her discipline and years of study in calligraphy really shine through in this piece. Georgianna, student of Lloyd Reynolds at Reed College, was a founder of Friends of Calligraphy and has taught many many calligraphers many many things, including me. 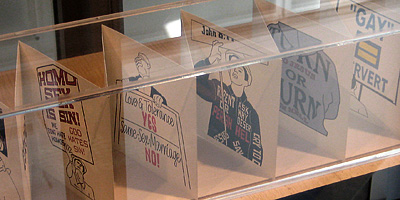 I am breaking my self-imposed rule on photographs with reflections in them to show these two of David Winkler’s “Hate Homos.” This accordion booklet uses a flawless gothic hand on one side of each spread, to write the message: “If these are men of God, then God help us all.” When looked at from the other angle, the men with their messages of hate were taken from a television newscast during the Prop 8 battle in California, traced over in Adobe Illustrator and printed out to form this book. The contrast between the hateful video images and the churchly lettering on the obverse is startling and thought-provoking, and makes me remember Ewan Clayton’s question to his students: “What is your calligraphy for?” David drew on all his artistic skills to make a profound and memorable statement. 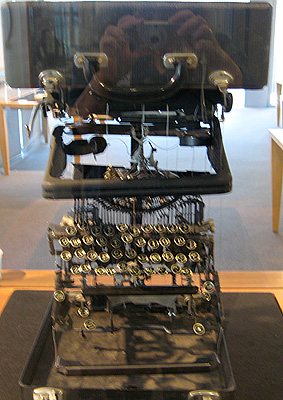 This last photo shows art that was not technically part of Kalligraphia, but was nearby. This deconstructed typewriter is sandwiched between the top and bottom of its carrying case, and my own reflection with my digital camera can been seen in the “head” of this somewhat robotic looking antique writing instrument. A rather fitting finish to an inspirational exhibit of another so-called out-of-date writing technology. But calligraphy that is beautiful and provocative is quite alive and well in San Francisco, thank you for very much. And reviewed by yours truly on the newest incarnation of writing, a computer keyboard. Little did I foresee that the typing class foisted on us girls back in high school would prove to be such an important skill in the 21st century. All these are extensions of the hand, which is truly the first writing tool, our own fingers in sand or dirt. Writing is alive and well and just continues to morph into even more interesting forms and expressions. Write on!

Postscript: I forgot to mention that there will be a series of calligraphy demonstrations nearly every Saturday afternoon at the library this summer in connection with the exhibit, so if you can get to the exhibit on Saturdays you will get a bonus! Click here for the schedule of demos and presenters. Well worth attending these mini-classes with these calligraphy luminaries!