Jung’s “Red Book,” or Diving Down Into the Unconcious 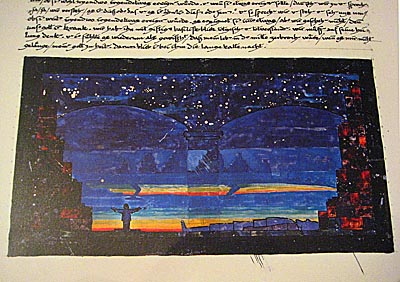 A friend asked me what I brought back with me from my trip to the east coast earlier this summer. Well, the list is long, some of it mighty personal, and I have already shared some of my experience of my calligraphy master class in a previous post. But one thing that has stuck in my mind is the above image, which I think of as the sleeper opening his arms wide to the colorful night sky, ready to receive the messages that dreams bring. 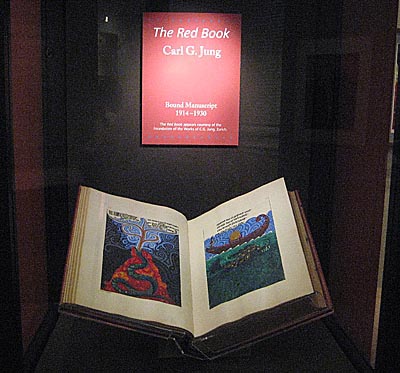 The image is from Carl Jung’s lately published and deservedly famous “The Red Book” which was hidden away under lock and key for decades after his death. Last year it was published in a facsimile edition, amid great debate as to whether he would want it seen. As a writer, calligrapher and bookmaker myself, I couldn’t help but think, when I saw the size, heft, and artistry of the book, that he always knew it would somehow see the light of day. I just don’t think anyone puts that much effort into something for it to be hidden away forever. His family thought otherwise, and so it stayed hidden for a long time. Now we can see it, and I am so glad. 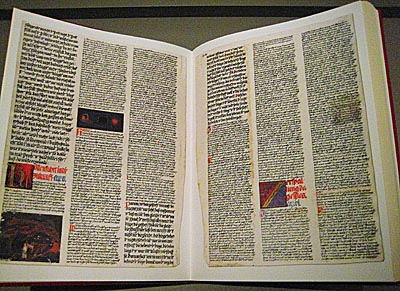 One of the things I love about the image of the dreamer embracing the night sky is that it so radically departs from the way Jung began his book, shown above. In the beginning, he used the conventional page layout of medieval books (which had a big revival during the Arts and Crafts movement and no doubt influenced his own creation), with three columns of small, careful calligraphy, interspersed with small illustrations and decorated capitals. Before long, though, that format was too constrained for what he was recording, and he threw out the rules and just painted and drew what was in his soul, wide open, right across the page spread, and with a much faster and looser calligraphy. Not at all unlike what modern calligraphers have done, studying the historical models and then making something new. 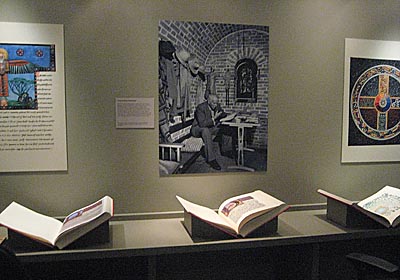 The exhibit I saw was in Washington DC at the Library of Congress, on the last day of my trip. With a wealth of art museums to visit, what does a writer do but go to the best library in the country? The images from the Red Book exhibit were taken on the sly (sorry, LOC), but like most buildings in DC, the floors are all marble, and, having been through two exhibits already, I was struggling to stay standing long enough to see this last exhibit. So I took some surreptitious photos to look at and decipher later when I could sit down, of course suppressing the flash; then at the very end of the exhibit discovered this lovely counter with three of the facsimile books fronted by three very comfortable chairs. Here I spent quite a long time resting my feet and reading through some of the translation of the book, and capturing a few more images, in the spirit of photos being allowed for the purpose of review.

It’s that top image that stays in my mind though: to not be afraid of what lies hidden deep inside; dive down; listen to your dreams; and discover great mysteries and beauties, all within and all shared. Jung’s “collective unconscious” had a great effect on many artists and thinkers of the last and present centuries, including the work of Joseph Campbell, of whom I am a great admirer. Having not seriously studied psychology, this show of Jung’s book was a revelation to me, and opens up a whole new geography of exploration.

The Red Book is on exhibit at the Library of Congress in Washington DC through September 25. The online materials about the exhibit are very good, including this one with details of the origins of this books. And here is a link to a very good article in the New York Times called “The Holy Grail of the Unconscious” about the background of getting this book published, along with some excellent images.