Jammin’ with the Book Folk 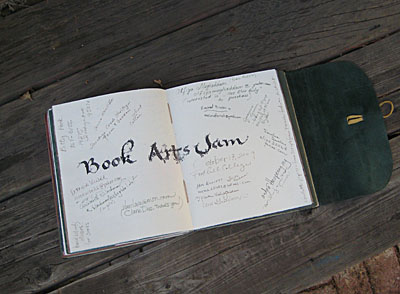 Yesterday’s Book Arts Jam at Foothill College was a crush of excitement and stimulation as many people visited our little exhibition room off to the side of the big exhibitors’ hall – the event has been steadily growing since it was first presented in 2002. I spent the day happily sharing a table with the poet Robert Perry, who for a dollar would pound out a poem on an old Royal manual typewriter, on whatever subject a person asked for. He was like a poetry machine, churning out words all day just for the sheer fun of it (and that dollar). I pulled out a few calligraphy pens and doodled a bit in the journal, which also served as my guest list. On Robert’s other side the next exhibitor had an HP printer set up and was running off limited edition prints, so we had a full circle of writing technologies along the back wall of this room (I say full circle since I had both of my limited edition books on display, created by digital printing from scans of original hand lettering and painting and then hand bound into books.)

The circle book was of course the smash hit of the selection on my table, and everyone had to pick it up and see how it worked. I explained how I’ve made five models of this book now, just to get the engineering right and am about ready to attach the final covers to the last model which will then become the real finished book. So it was the “proofs” I was sharing and allowing people to handle. 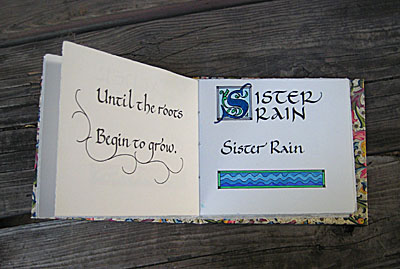 Surprisingly, for me, the book that people reached for over and over was the first book I made in a calligraphy class in 1992. It has decorated letters, and a medieval feel, but the book itself is falling apart. There were all of the other kinds of books I’ve made, and people reached for the most traditional kind of book; several people tried to buy it from me. But I made it as a little prayer book, when my kids were 2 and 7 and I was trying to clarify our spiritual path for them, so it has a high sentimental value even though made with some rather crude bookbinding skills, and I somehow couldn’t let it go. Maybe someday. I couldn’t see how it could have any value for anyone but me. A lesson for me in remembering my roots. Overall it was a wonderful day of watching people react to my books, what they liked, what they ignored. A rare opportunity for me, and one that I enjoyed very much. My only regret was that I didn’t get around to see everyone else’s exhibits and books. I got to hear a lot of poetry though and that is a good day!