Whan that Aprill with his shoures soote
(When April with its sweet-smelling showers)
The droghte of March hath perced to the roote,
(Has pierced the drought of March to the root,)
And bathed every veyne in swich licour
(And bathed every vein (of the plants) in such liquid)
Of which vertu engendred is the flour;
(By which power the flower is created;) . . .

. . . and so on. This is the prologue to Chaucer’s Canterbury Tales, in which he tells that spring sets folks a-wandering, that is, going on pilgrimages and travels. So not only does he begin his tales with a famous medieval reference to April (perhaps the old source of “April showers bring May flowers”), but in the Nun’s Priest’s Tale, he makes a reference to March 32nd that possibly is the origin of April Fool’s Day:

Whan that the month in which the world bigan,
(When the month in which the world began,)
That highte March, whan God first maked man,
(Which is called March, when God first made man,)
Was compleet, and passed were also,
(Was complete, and passed were also,)
Syn March [was gon], thritty dayes and two,
(Since March had gone, thirty days and two,)
Bifel that Chauntecleer in al his pryde,
(Befell that Chauntecleer in all his pride,)
His sevene wyves walkynge by his syde,
(His seven wives walking by his side,) . . .

. . . and thus begins the tale of Chanticleer and the Fox, two fools trying to outwit each other. So here we have talking, polygamous animals, the new year beginning in spring, and no doubt many other paganish references. 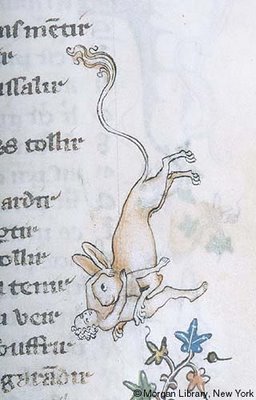 Well, this is not the bible, but some of the earliest English “literature” which just shows to go you, the old Anglo-Saxons could tell a ribald tale or two. Just try the Wife of Bath if you want some really licentious literature. And beware marauding Easter bunnies!

Here’s a URL for the image at the top. You can see the calligraphy much more clearly.

post script April 1, 2015: updating these links, I found the amazing digital assets at UC Berkeley’s library, and replaced the above link. I really recommend it! Visit http://digitalassets.lib.berkeley.edu/ds/huntington/images//003078A.jpg to “zoomify” the image ( a new word I learned on the Morgan Library website today).

Next post: Teach Us, and Show Us the Way

Previous post: A New Skin for a New Year