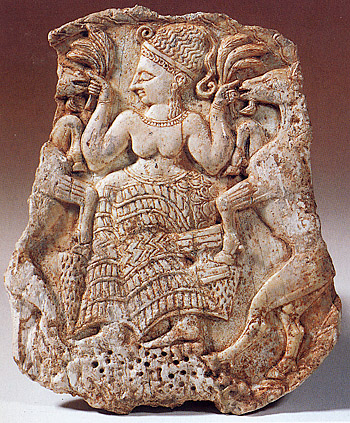 This dancing goddess from 3300 years ago is probably the ancient Greek goddess Demeter, or, as the Romans renamed her, Ceres, the source of our word cereal. She is from Ugarit, ancient Phoenecia, ancestral Canaan. She is the goddess of the grain and was believed to have given the gift of agriculture to us. She dances here bare-breasted, holding two sheaves of grain and with her animals on either side. Her depiction on a ivory cosmetic-box cover speaks to the sacred use of body paint and adornment, and she is further adorned with jewelry and a beautiful patterned skirt. She is the young form of the goddess, at her height of sexual beauty and passion.

Demeter is the goddess most associated with motherhood, and the loss of her daughter Persephone to the underworld brought her such grief that the world withered without her attention. This story was the foundation of the ancient Eleusinian Mysteries conducted in Greece for two thousand years.

But here she is joyous and dancing, before sorrow. She is such a joyous image of midsummer, full of the sun’s energy, that I offer her for today, summer solstice, the longest day of the year in the northern hemisphere of our mother Earth. And so the wheel turns toward the dark half of the year, though we won’t notice it for a while. Summer is upon us in all its fullness and light and everyone is planting their summer vegetable garden.

Body wisdom: Dance in the garden of life!