Ghosts of Revels Past and Present 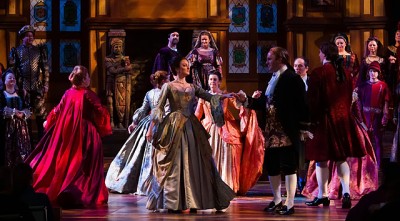 Over the years, I have seen such pageantry, puppetry, antics and spectacle  as any Yule fool could possibly want. This year’s Revels, though, touched my heartstrings and played them more deeply than I expected. The story in this year’s show is, in a way, the story of Revels itself: bringing the past alive so that you feel yourself clasping hands with ancestors and descendants at once.

The story  unfolds in a great English manor house in the 1920’s. The new duke and his family pay a midwinter visit to the seemingly empty Haddon Hall. The new lord plans to tear down the old house to make way for “progress,” a faster motor route to Manchester. But, he muses, “If these walls could talk” . . . and as the lights dim, the past begins to come alive. Soon the “Haddon Haunts” have arrived, all of the past lords and ladies of the manor, and they invite the family to join in the season’s festivities. 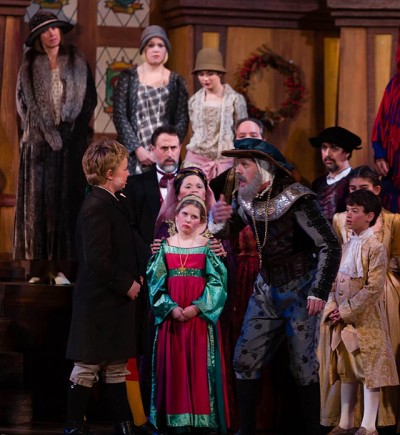 The young son of the family, above, is confronted by a crotchety past Lord of Rutland, one of several of the Haddon spirits present who bear the title. 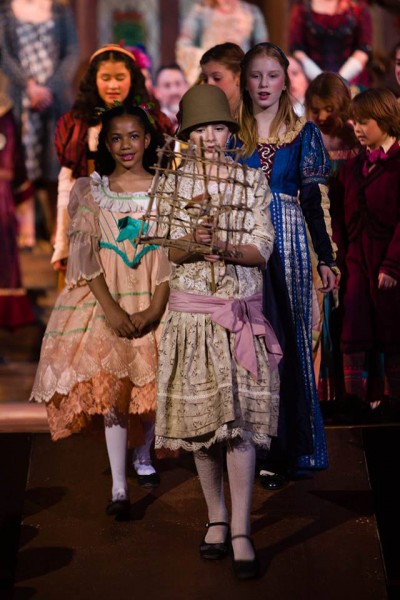 Carrying a caged wren from house to house is an old English tradition on St. Stephen’s Day, and here the young daughter of the family encounters the old mystery as she is given the honor of carrying the “king” of which they sing, in one of my favorite carols, “Please to See the King.”

The “distaff side of the family” elects to join in the fun with the spirits, glad for the friendliness being extended to them, happy for the dancing, quick to join hands. 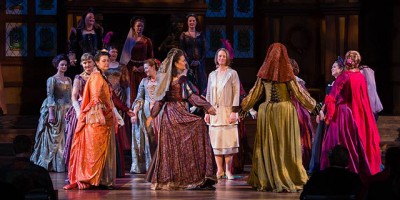 There is a lovely dance where the lady of the house is welcomed into the women’s circle, a hauntingly beautiful scene.

The stuffy young son, the heir for whom this drastic decision is supposedly being made, encounters his transformation more mysteriously, in the midnight hours. And the lord finally unites with his ancestors in an ancient enactment of sacrifice and rebirth. Everything of Revels is here in the story, for it is all about the stories. The songs and dances weave us backward and forward through the great loom of the generations.

The manor house in the story is the great Haddon Hall, a real place in Derbyshire, England, whose duke in the 1920’s set about an extensive restoration of the estate, which had lain dormant for over two centuries. Today it is one of the best preserved of England’s old fortified houses, dating back to the 11th century. Because the ancestors are showing the current lord and lady a spectrum of traditions from across time, this show has many Revels favorites. 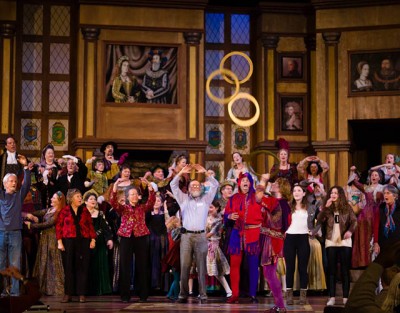 Twelve adventurous members of the audience are escorted onstage by the jester for a rousing version of “The Twelve Days of Christmas,” accompanied by the young apprentice juggling the Five Golden Rings.

More touches I loved: framing the Abbots Bromley Horn Dance as a deep-of-night silent dance witnessed by a hiding child; that little dash of James Bond music when Lord Manners assumes the garb of St. George to slay the dragon; the dimly-seen chorus singing from the upper balconies;  a Scott Joplin rag, and a multitude of wassail songs! 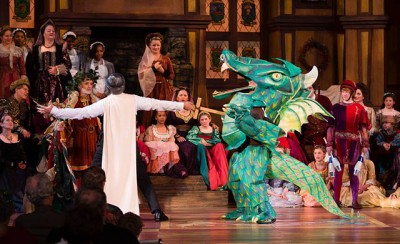 The cast and chorus is large and the dance of the generations onstage is a marvel, as is the set with its secret entrances and exits, magical fire and illustrated dancing floor. The costumes, as always, are absolutely splendid, spanning medieval, Tudor, Victorian and modern times.

More than ever, this year, I feel the importance of story to Revels. Terry Tempest Williams writes: “Story is the umbilical chord between the past, present, and future; it keeps things known. Stories become the conscience of the community, it belongs to everyone. When we think of what it means to be human, it is always answered or explained through story….”

Revels, as a keeper of many stories from the past, weaves magic. There are five performance still to come, Friday through Sunday of the upcoming weekend, December 20-22.  Celebrating the winter solstice with this family of haunts will give you a full heart and merry tunes to dance you through the holidays. 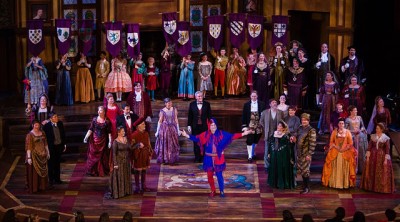 All photos thanks to Charles and Janet McMillan who so wonderfully capture the soul of California Revels.

Next post: The Shortest Day Marks the Turning Year