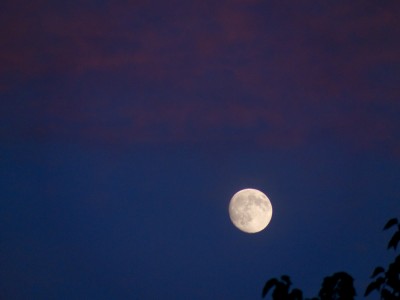 Praise to the moon, bright queen of the skies,
Jewel of the black night, the light of our eyes,
Brighter than starlight, whiter than snow,
Look down on us in the darkness below.

Give strength to the weary, give alms to the poor,
To the tainted and needy five senses restore,
Give song to our voices, give sight to our eyes,
To see the sun bow as the new moon shall rise.

Cast your eyes downwards to our dwelling place,
Three times for favour and three times for grace,
Over the dark clouds your face for to see,
To banish misfortune and keep Trinity.

The magic hour: pink clouds and a sumptuous moon. The last full moon of summer. The next time she will be a harvest moon.

When I see a bright moon this beloved song comes to me. Called Traveller’s Prayer, it was written by John Renbourn and loosely based on a prayer to the moon collected by Alexander Carmichael in Carmina Gadelica (you can see the poem on this page).

This beautiful song is performed here with lovely images. Or you can listen to the recording by John Renbourn from the 1998 album, called either Traveller’s Prayer or Ship of Fools.

I confess to loving the version above, as I first heard it on a Revels recording called “Sing Noel – A European Christmas Revels.” The last verse was changed by Patrick Swanson, artistic director of Revels, to honor the waters which are tied so closely to the moon. An MP3 of this recording can be found here for download. The last verse as originally written by Renbourn was:

Lovely all ways, is our Lady Moon.