Filling the Well at the Codex Book Fair

Last week I emerged from my solitary bastion to go out into the world and rub elbows with other artists and writers. I’ve been thinking of my workspace as a StoryKeep – “keep” as in the inner stronghold of a castle, a refuge, plus another meaning of the word – to keep, to remember, to preserve. I have been working steadily on getting my manuscript into a coherent shape, and have just sent out the first glimpses to my first readers. I know from my years in the creative field that all artists, no matter how dedicated, need time away from the drawing board or keyboard to fill the well.

So, a drive up the East Bay on a beautiful winter day, alongside the brilliant snowy peaks to the east, was just what the taskmaster ordered. The Codex Book Fair has for the last several years been held biannually in the Craneway Pavilion in Richmond, formerly the Ford Assembly Plant, on the waterfront of San Francisco Bay. I never fail to be stimulated and ordained by this immersion in so much creative work.

I was honored and pleased to interact with books made by artists from these shores as well as from Argentina, Greece, Egypt and Canada. I held back on purchases, only succumbing to these three little stenciled prints from Gina Page of Seawrack Press, delighted by the ink on gossamer paper. I should put them in a little frame, but I also like to just hold them. 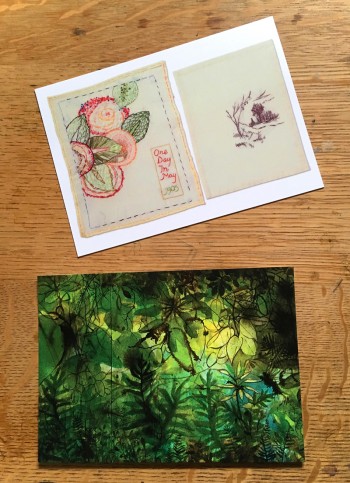 I knew as soon as I arrived I had made the right decision to come. My first stop was at Lucy Child‘s table of exquisite and delicately embroidered books of stories, many set on Quiet Island. Around the corner was the forest haven of Andie Thrams, another artist whose work I could linger with for a long time. I have never studied with her, but have heard her workshops are magical: she takes students out into the woods to observe and delight in nature, and herself paints lush wildscapes in which one can lose oneself.

I was initially so overwhelmed with the visual delights before me I forgot to take pictures, but both of these artists pressed a postcard into my hand so I have little mementos to remember their work by.

It became a theme, finding these soft sanctuaries in the middle of the very crowded hall full of people and vendors and noise. But again and again, these quiet bits kept coming through.

Robin Price’s Witnessing Ecology: The Agave Plant Book was a surprising form which invited exploration into its leaves, where I discovered that “The Earth asks us to play by her rules.” And her charming price list, written out at the literal last minute, was almost as much fun as her books and broadsides. “And why not a handwritten at the 11th hour price list?” 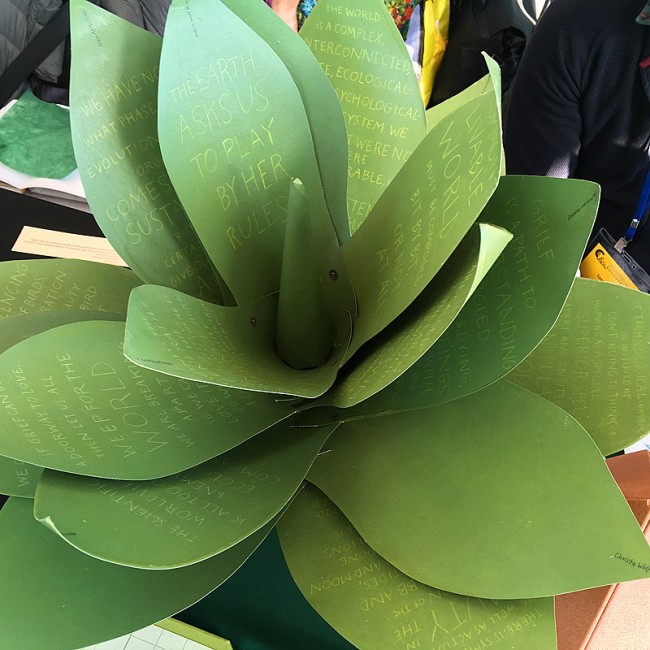 When I arrived at Marina Soria‘s sumptuous table I nearly swooned with the tactile lushness and color of her work. A detail of her book Mira Calligraphia Monumenta is at the top of this post. Her lettering work is marvelously varied and exploratory, and often uses her equal skill in the textile arts. Luckily I had my wits about me by this time and asked to take some photos. 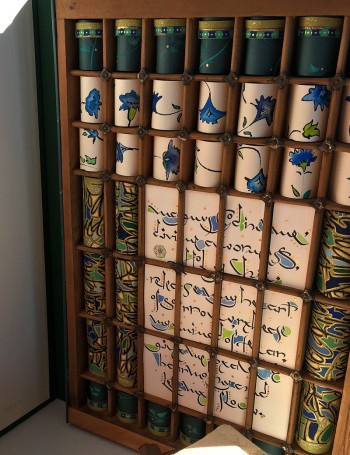 Here is an absolutely lovely treatment of an old font case. These old artifacts of the days of metal type are uniquely fascinating for modern lettering artists, most of whose work has evolved during the digital age. Marina’s letters here are redolent of Arabic calligraphy with their swooping forms. Her use of decoration is also informed by Persian decorative art, which in turn originally influenced our Western medieval manuscript art, after the returning Crusaders brought the art of exotic lands to Europe hundreds of years ago. Marina’s work manages the feat of feeling thoroughly modern while still giving a nod to her roots in classical manuscript illumination and lettering. 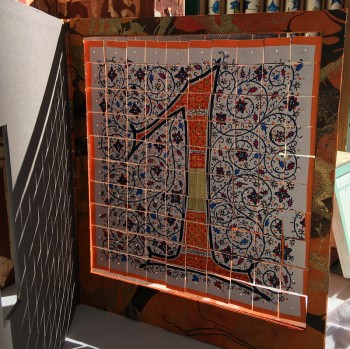 In this piece which plays with light in such a beautiful way, called Genesis 1:1, Marina evokes the dawn of creation with woven letters and vining decoration, illuminating the work, in all of its meanings.

Every piece of Marina’s work is beautiful , but this one just caught at my heart and held it. I had just been writing about this very thing, the natural spiritual reverence of children and how often we make a special niche or tableaux in a secret place for our devotions. Children are capable of quite fervent religious feelings, toward deity, toward nature. This book, which Marina has made both in English and in Spanish, was a lovely presentation of her childhood experience doing exactly this. I was deeply moved to read her story, so magically crafted. 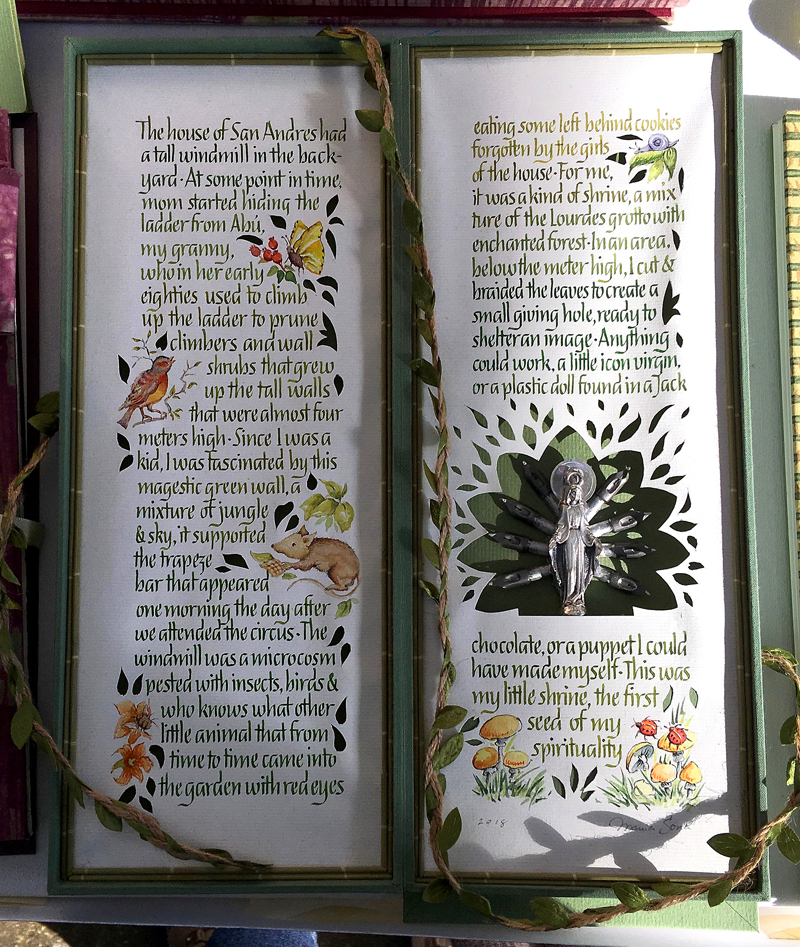 And here is a closer look at this lovely Mother Mary with her rays of “light.” My calligrapher’s heart just went pitty-pat! 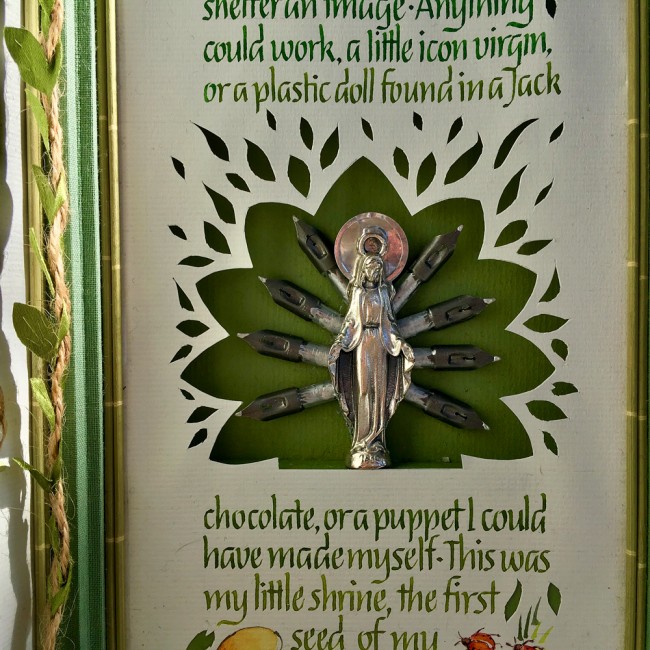 The best parts of the day were not captured in images but in my mind. Several encounters fed my story writing. Serendipity was at work in the conversation I had with a fellow calligrapher who was, amazingly, able to shed some light on my father’s university education, and again, in a sudden introduction to another writer whose work of researching a nearly-forgotten ancestor mirrors my own sacred charge to bring back an erased grandmother. I was surprised by both of these exchanges, which were very rich and fruitful. But perhaps it is not so unusual when I remember that all book artists participate in their own ways in the unique art of word flow and capture.

At the Vamp and Tramp table I fell into the lovely Fatal/Fairy book by Catherine Alice Michaelis , which treats themes dear to my heart. I was especially charmed by her fascination with the relationships and etymologies of words, as I am. Unfortunately, I took no pictures of it, but it shows on her website. 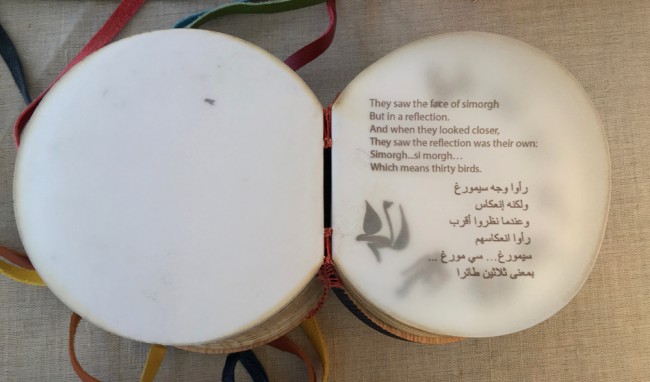 I was absorbed by the books at the table of Islam Aly, for their playful treatment of alphabetic and folkloric themes. I knew the story of the Simorgh as an old Persian folktale, but his innovative treatment of it was so original and captivating. Again, his website shows it much better than I ever could. 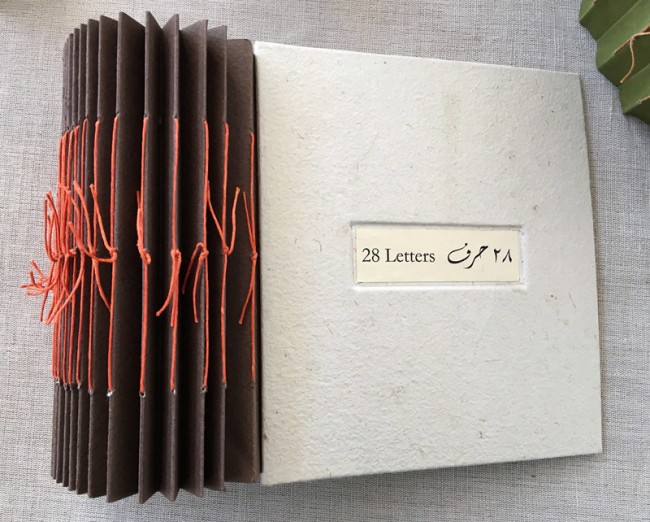 The twenty-eight Arabic letters in this book were laser-cut out of the pages, making a fine interplay of light and dark.

And hexagons are so much a part of the tesselation all over Persian and Islamic architecture, that this little book was yet another treat. I have been fascinated with hexagons for a long time, ever since I pieced a quilt top of them before I had my children. It is one of the primal shapes of the universe, appearing in the honeycomb of bees and on the north pole of Saturn. Some say it is a symbol that defines symbolism. 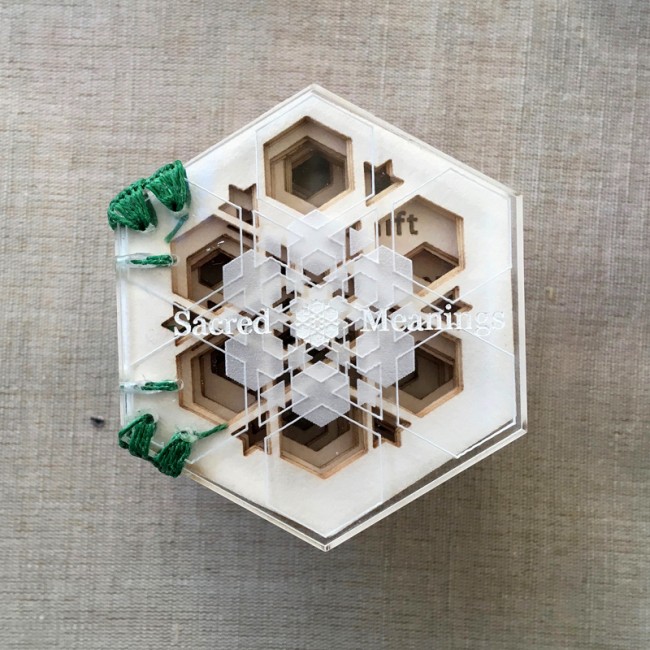 Finally, nearly at closing time, I washed up at Maro Vandarou‘s table, where her sanctuary of ancient secrets enveloped me like a soft blanket. Her new creation, a book of whispers, is as tender and interior as her previous book, Persephone’s Chamber, which I discovered when I was at the Codex show two years ago. 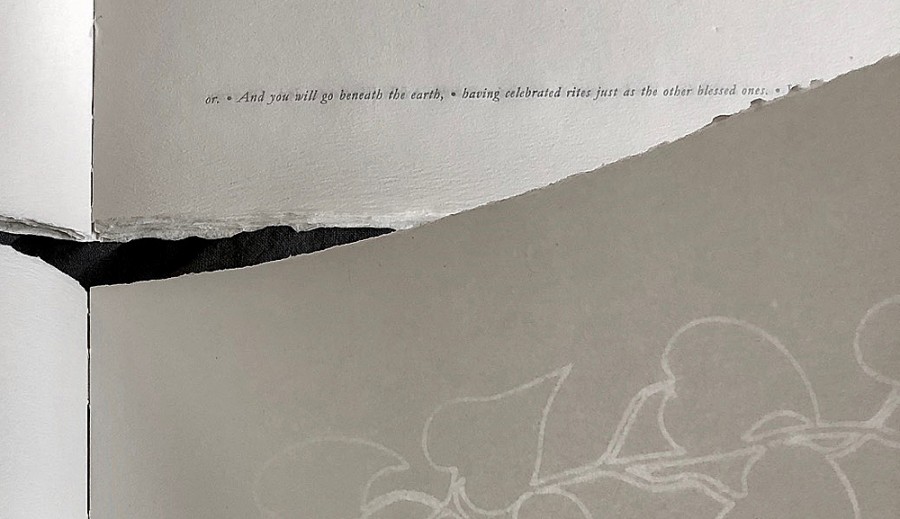 The text of whispers was discovered during a journey to her homeland, where she found in her hands, at the Acropolis Museum, an object shaped like a half moon, inscribed with these words:

I am parched with thirst and I perish. But give me to drink
from the overflowing spring on the right, by the cypress.
I am the daughter of Earth and starry Heaven.

With a shock she realized this was a lamella, a sacred text of the Orphic Mysteries, whose initiates believed in an afterlife, and who desired to drink from the river of Memory (Mnemosyne) and not the river of Forgetting (Lethe). The initiate must not forget the instructions written on the manuscript, memorized in life, which, shaped like a half moon, would have been held before the lips, to seal the knowledge for its use in the Underworld. The gilded letters of the lamella Maro held specifically identified the initiate as a “daughter” rather than the more common “son” or “child.” 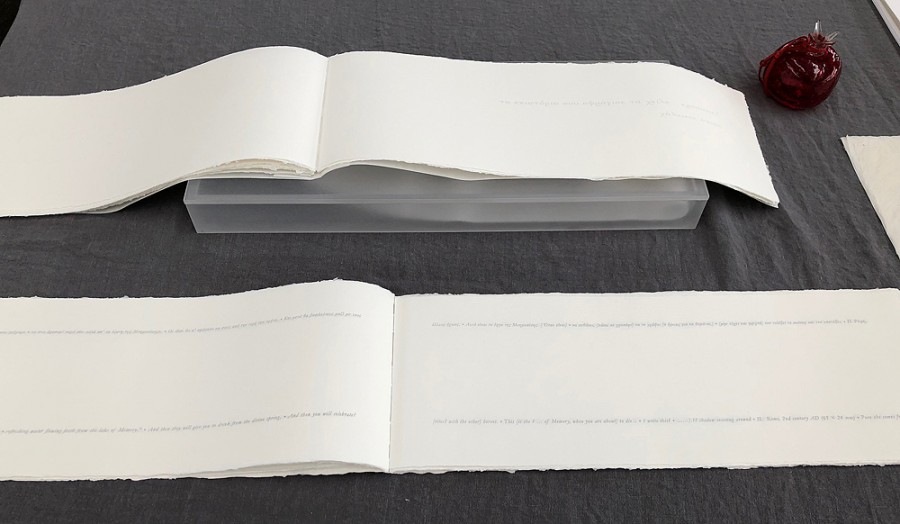 The work that Maro does is rare and precious; her materials are carefully chosen and her artistic decisions not hasty or expedient. Her table had only two works on it, the nearly-last copy of Persephone’s Chamber, and the new book, a book of whispers, its text so secret it is only visible by holding the pages up to the light to see the watermarked words. Despite the hidden nature of this book, it still invites one in, murmuring its mysterious story. Its companion book gives the story again, sparingly, in delicate lines of Greek and English. 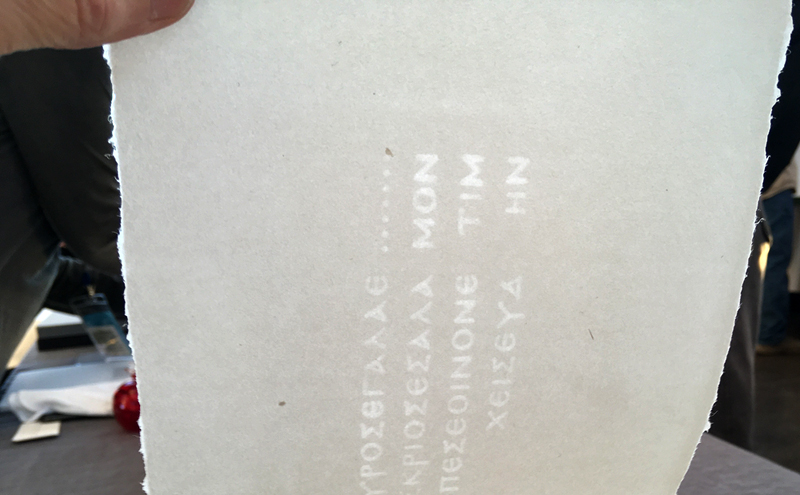 Though I am not Greek and have no lineage from that part of the Mediterranean, I feel nevertheless a resonance with the myths and stories of that place that underlie so much of our culture. Maro and I share a desire to  speak with authentic voices of the lives and deaths of the women who came before us.  Our connection was instant when we first met and instantly renewed this year. 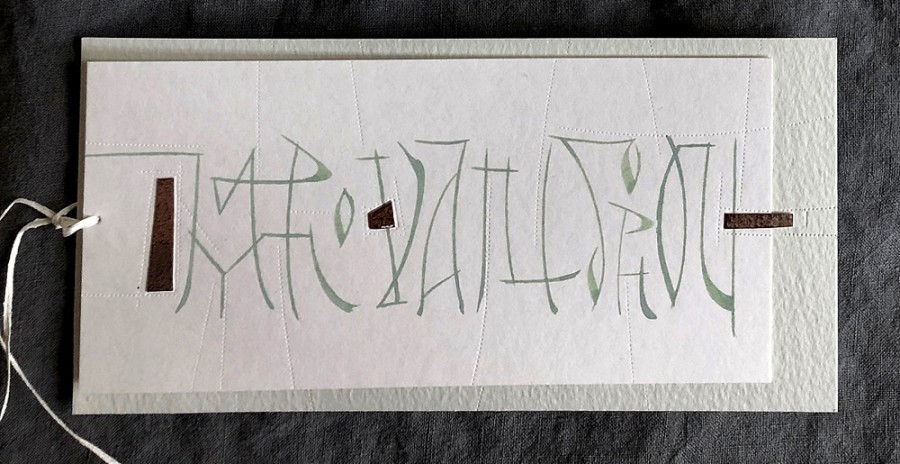 The calligrapher who introduced me to Maro’s work two years ago, Georgia Angelopoulos, was present in her lovely hand lettered tag of Maro’s name.

I went to the fair because many people asked me to come, and some friends asked to see my newest work. I had to explain that there is nothing yet to see, as I am not practicing the craft in quite the same way. Because there are so many ways to write, including my calligraphy, putting pen to paper, I have been thinking of myself as not only a writer and author but as a storyteller. This year, for the first time, I detoured away from the book fair for a while to visit an adjoining museum as research for my book, but that will be the subject of another post. I am glad I made time to visit the world of books and makers, and I know I will continue to be a part of it, in some form, for as long as I have words to write and stories to tell.