Farewell to Summer, A Flower Mandala 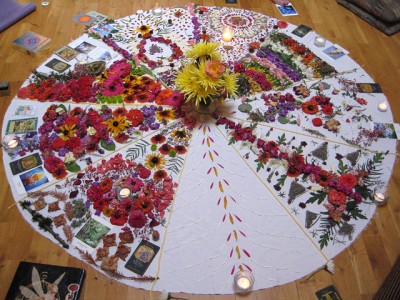 At this turn of the Wheel, I was grateful to be up in the forest on the mountain, in more-than-ordinary sacred space, circling again with women at the autumnal equinox, and making a flower mandala as a farewell to summer. I had the round white cloth from my mother, who used it as a tablecloth for a small round table in her house. I kept it these last decades thinking it would be good for something, and it finally was. 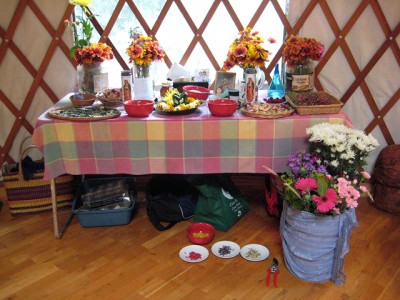 When I was small and my mother volunteered on Sunday mornings at the church, I loved to go with her to the sacristy before the service, where the flowers were prepared for the altar. In the ceremonial yurt we had our own kind of sacristy, a table with vases,  baskets and sacred images holding flowers of all kinds from everyone. The four big bouquets along the back were from the fittingly-named Guadalupe Community Garden in San Jose. 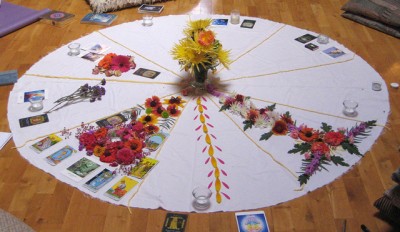 The cloth was measured into nine pie shapes with yarn. Flower heads, petals, leaves, and seeds began to be slowly added over the weekend. 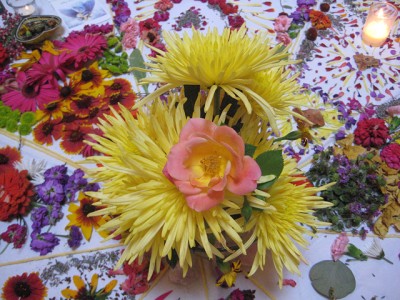 A bouquet  of  yellow mums, marigolds and a Foundry rose held the center. 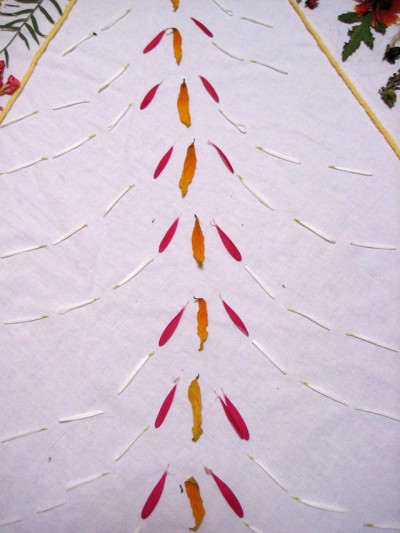 I surprised myself by keeping my section simple in the extreme. We are entering the season of the ancestors. Marigolds festoon the ofrendas made for Dia de los Muertos. My circle sister told me they are called the “headlights for the dead.” So I made a yellow path for them. Later, when I was ready to return from visiting with my dear ones who have gone before, I added the white petals reaching out to the sides to touch my sisters in the circle. 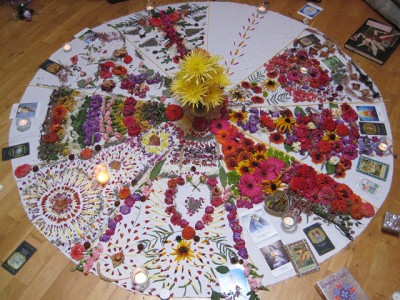 When it was finished we had made an amazing altar, a mandala meaningful in every way to each woman who created her part in it, all different paths but one beautiful and holy expression of devotion to the Mother.

We were blessed with the first rain of the season at our equinox retreat, making it truly feel like fall. 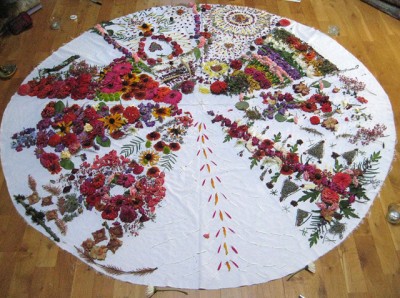 On Sunday we finally released it, letting go the flowers into the mountain stream to be carried by the winter rains to the sea.